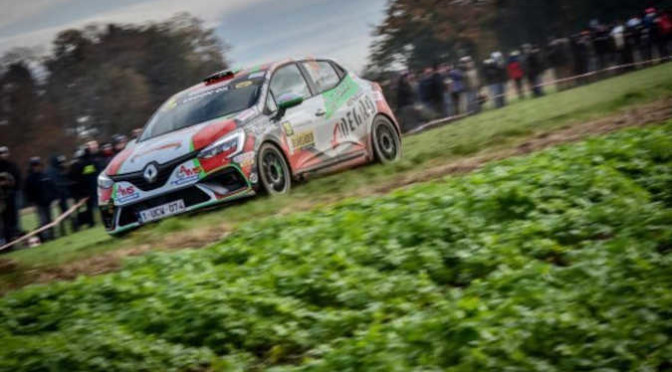 Two Clio Trophies were decided this weekend while Romain Di-Fante made a perfect debut with Clio Rally4 in the wake of his Clio Trophy France Asphalte title!
Clio Trophy Belgium

The Clio Trophy Belgium, which was introduced this year, now has its first-ever title-winner after the season-finale on the Rallye du Condroz, a monument in Belgian rallying.

Gilles Pyck and Émile Mourisse arrived in Huy atop the general classification and set the best on the first five special stages and seven of the ten timed sectors on the first leg. The only crew who could still deny them the title, Benoît Verlinde and Anton Dupan slotted into third behind Tom Rensonnet and Renaud Herman.

On Sunday, Gilles Pyck put the hammer down winning the three morning stages before managing his lead and sealing his title in style with the best time in the final stage. The Belgian won with a 45.8s margin of victory from Tom Rensonnet, whereas Niels Reynvoet & Ward Hanssens pipped Benoît Verlinde for third place.

With four victories and two third places in six starts, Gilles Pyck wins the inaugural season of the Clio Trophy Belgium ahead of Benoît Verlinde and Tom Rensonnet in a final general classification dominated by the Juniors. Next year, Gilles Pyck will contest at least three Belgian Rally Championship rounds with Clio Rally4.

Ten crews were at the Rallye La Nucía-Mediterráneo for the penultimate round of the Clio Trophy Spain season before the exhibition final in Madrid next month.

The leading crew of Jorge Cagiao and Amelia Blanco got off to a perfect start, winning three of the four stages on Friday to open up a 37.0s lead over Germán Leal & Pablo Sánchez. Third at the end of the first leg, Diogo Gago and Eduardo Carvalho shifted into high gear the next day with three fastest times in five timed sectors to win by 21.7s over Jorge Cagiao, who finished runner-up to secure the title. Both crews also finished in the top ten, with Carlos Rodríguez and Esther Gutiérrez joining them on the podium.

With two victories, a second-place and two fourth-place finishes, Jorge Cagiao claims his second consecutive Clio Trophy Spain title ahead of Diogo Gago and Germán Leal, as well as a drive with Clio Rally4 in 2022.

Next round: Rallye CAM Madrid (3-4 December)

A week after concluding his victorious campaign in the Clio Trophy France Asphalte, Romain Di-Fante quickly got the measure of the Clio Rally4 he will drive during his official programme in the French Rally Championship. With eleven best times and fifteen top-three times in as many stages in their class, the driver from Nice and his co-driver Jules Escartefigue dominated their category while finishing second in the two-wheel-drive classification and ninth overall on the Rallye d’Automne La Rochelle.

Romain Di-Fante was not the only one to excel in a Renault on the roads of Charente-Maritime. On the same event, Antoine Massé and Pauline Choffel won ahead of Bertrand Blondel la Rougery & Benjamin Mondière and Marvin Sorin & Karine Moinet-Corbineau to climb on the top step of an RC5 podium monopolised by Clio Rally5!

Gabriel Lebois and Ludovic Moreau also led Clio Rally5 to a class victory at the Rallye du Vallon de Marcillac-Aveyron by just 1.3 seconds ahead of the Clio Rally5 of Johan Gres and Nicolas Hebrard.

In Spain, Alejandro Mauro Sanchez and Diego Sanjuan de Eusebio scored another class podium at the Ral.li Ciutat de Tàrrega where they finished eighth overall with their Clio Rally4. In parallel to Clio Trophy Spain, Carlos Sampayo and Sergio Cancela Boga took their Clio Rally4 to third place in their class on Rallye La Nucía-Mediterráneo.

On a different surface, the Clio Ice Trophy is gathering momentum. Organised as part of the two-wheel-drive category of the Crèdit Andorrà GSeries, this new competition – open to Clio RXs as well as the tarmac and gravel versions of Clio Rally5s – will be contested over four events in early 2022. More information here.

The Clio Cup Europe season-finale at the Circuit de Barcelona-Catalunya (12-14 November) will be the event of the week. Among the 47 drivers in Spain, Nicolas Milan and David Pouget will fight for the overall title while the Gentlemen Drivers Cup crown is still up for grabs. Groups B and D will also be decided, and all internal classifications remain up for grabs!

The Clio Trophy Rally Turkey will travel to the Kocaeli Rallisi (13-14 November), initially scheduled for August but postponed due to fires in the region. Lastly, Clio Trophy France Terre title-winner Quentin Ribaud will try to seal the French two-wheel-drive Gravel Rally Championship crown on the Rallye Terre de Vaucluse (13-14 November), where six more Clio Rally5s will be in action.