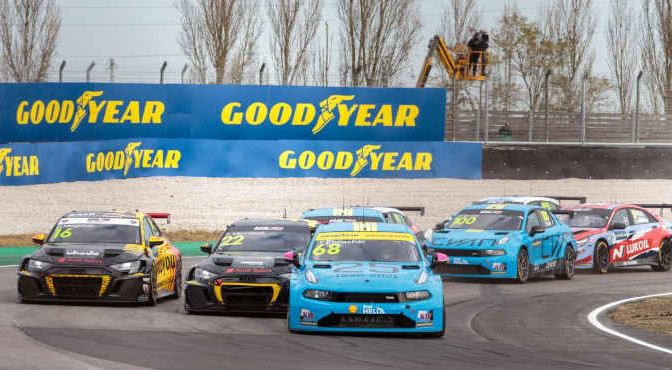 Yann Ehrlacher made full use of his pole position to win Race 2 at WTCR Race of Italy and head a six-way fight for the WTCR – FIA World Touring Car Cup title at Sochi, Russia, in three weeks.

Ehrlacher’s performance in his Goodyear-equipped Cyan Racing Lynk & Co 03 TCR was sublime as he sprinted to victory at Adria International Raceway ahead of Frédéric Vervisch and Gilles Magnus.

The 25 points he scored for the win, plus the 10 points he claimed in Qualifying and the six points he earned for finishing P10 in Race 1 means the Frenchman heads to the inaugural WTCR Race of Russia from November 26-28 as the Goodyear #FollowTheLeader and with a 36-point margin as he bids to become the first driver to win back-to-back WTCR titles.

Like Ehrlacher, Santiago Urrutia is also a double WTCR winner in 2021 after he took the honours in Race 1 for Cyan Performance Lynk & Co. The Uruguayan started on pole, dropped behind Esteban Guerrieri at the start, defended from Tom Coronel before muscling ahead of Guerrieri before the opening lap was done to snatch a lead he wouldn’t lose. Coronel (Comtoyou DHL Team Audi Sport) overtook Guerrieri for second in the closing stages with Honda-powered Guerrieri completing the podium for ALL-INKL.COM Münnich Motorsport.

Guerrieri leaves Italy third in the provisional standings, one point behind Vervisch but 37 down on Ehrlacher. However, with 60 points up for grabs in Sochi, a total of six drivers remain in contention for the title with Urrutia, Yvan Muller and Jean-Karl Vernay also not out of the fight.

For Frenchman Vernay, the WTCR Race of Italy weekend promised plenty but delivered only frustration. Having won Race 2 at WTCR Race of France last month, the Engstler Hyundai N Liqui Moly Racing Team driver had high hopes of more success in France. But a troubled Qualifying and a non-score in Race 2 following contact has dented his chances significantly.

Zengo Motorsport’s Rob Huff was the best CUPRA-powered driver with P10 in Race 2, on place ahead of team-mate Mikel Azcona. Local driver Nicola Baldan was P19 and P18 for Target Competition.

Vervisch won the TAG Heuer Best Lap Trophy courtesy of a rapid effort in Race 2, while Ehrlacher was the TAG Heuer Most Valuable Driver after scoring 41 points.

RACE 1: Santiago Urrutia (Cyan Performance Lynk & Co, Lynk & Co 03 TCR)
“It was a difficult race. I knew the Hondas and pretty much everyone has been quicker than us on the start, I think Tommy as well was quicker than me but I could close the door at Turn 1. Esteban did a really good start but I knew this track is difficult to pass and I knew I had a chance at the beginning when I had good tyres and I said I’m going to go for it, I know track is small and it’s difficult to overtake but nothing to say about [the pass], just it was good. From the front it wasn’t easy, I was pushing very hard to make a gap and finally I got the win. I’m very happy for myself for another win this season and happy for the team as well, they give me a really good car. I had some vibrations in the car and I suffered a lot with the brakes but I believe pretty much everyone had the same problem. But luckily I was in front and basically I could control it. We start P10 for Race 2 and let’s see how it feels from behind but I hope it will be okay. But it was good to win.”

RACE 2: Yann Ehrlacher (Cyan Racing Lynk & Co, Lynk & Co 03 TCR)
“For sure the weekend started well with the pole position. The lap was good in Q1, the lap was very good in Q3. So I think the timing was quite all right to put that together now as we get closer to the end. Today after a difficult Race 1, but starting at the pack I expected that and didn’t want to take any risks. So I focused on race two. We have been struggling for a few weekends with the start, we’ve been doing really bad starts. Then the team worked to really late last night to provide us with a new system that we had to adapt to. After doing the same thing for three years we had to change and that was definitely not easy, on both the team’s side and for us. So definitely a big thanks to them because they saved us today. The getaway was good, I managed to take the lead at the start at T1 and then I played the symphony I had to do for a few laps and then we bring it home. I’m really pleased about that and I can’t thank the team enough to provide me with such a good car and to keep digging every single time we go out on track. I’m really pleased with the work we are doing all together.”