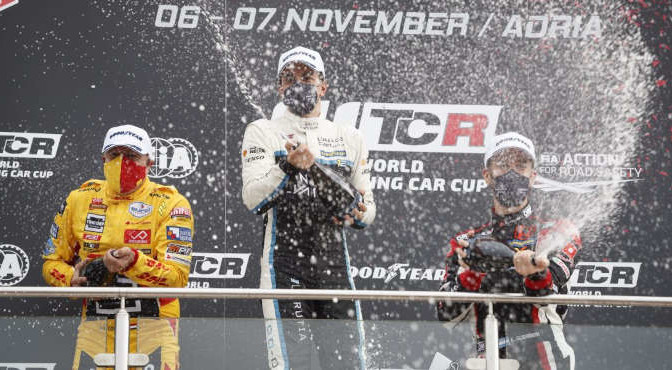 Santiago Urrutia headed Tom Coronel and Esteban Guerrieri in Race 1 at WTCR Race of Italy. This is what they had to say afterwards.

Santiago Urrutia (Cyan Performance Lynk & Co, Lynk & Co 03 TCR): First position
“It was a difficult race. I knew the Hondas and pretty much everyone has been quicker than us on the start, I think Tommy as well was quicker than me but I could close the door at Turn 1. Esteban did a really good start but I knew this track is difficult to pass and I knew I had a chance at the beginning when I had good tyres and I said I’m going to go for it, I know track is small and it’s difficult to overtake but nothing to say about [the pass], just it was good. From the front it wasn’t easy, I was pushing very hard to make a gap and finally I got the win. I’m very happy for myself for another win this season and happy for the team as well, they give me a really good car. I had some vibrations in the car and I suffered a lot with the brakes but I believe pretty much everyone had the same problem. But luckily I was in front and basically I could control it. We start P10 for Race 2 and let’s see how it feels from behind but I hope it will be okay. But it was good to win.”

Tom Coronel (Comtoyou DHL Team Audi Sport, Audi RS 3 LMS): Second position
“I had a good start but I couldn’t switch in between the two guys so I had to let Urrutia go in between. But I saw they were quite hot and in the first lap I could see they were looking for gaps and were trying to see the opportunities. Finally, of course Urrutia took a risky move, I thought ‘what do you do?’, but they looked alright. Then for me it was to take a little distance from Michelisz and see what happens there. I saw my car was fast on the long pace and finally I was teasing Guerrieri but not really too strong and then they told me, ‘Tommy, there’s only seven laps to go’, so we now have to see if there’s a bigger gap than the one metre. We tapped a little bit but that’s touring car racing. We were side by side for three corners, we respected each other there and I could take the second place. I pushed very hard and on the last lap I thought I would see if I could catch Urrutia but he was too far away but happy with P2, very happy.”

Esteban Guerrieri (ALL-INKL.COM Münnich Motorsport, Honda Civic Type R TCR): Third position
“Yeah, it was a good start. Obviously, I knew it was going to be a tough race, the blue cars they were basically quicker than us the whole weekend, they are lighter than us as well. I was going to try to fight the position but it was going to be hard, I know. Nevertheless, in the first lap attacking and pushing from the back in the second last corner and then going, diving on the grass and then pushing me wide off the track, I don’t think is the best way to gain a position and of course I am pissed off. We all can do this, we all know how to race, we all know how to be aggressive up to a limit and then if you go over the limit it’s easy to do it but it’s not fair. A little bit pissed off, obviously then I lost P2 to Tom, I had some problems with the shifting, it engaged from first to third instead of second, so Tom went side-by-side to me. It was actually the same move as with Santi, Tom in the outside in the last corner like I was with Santi, and I didn’t push him out wide because obviously he had the position there. I could have done it, I could have gone power and pushed him off, but I didn’t do and I lost a position. Bad to me, but it’s part of racing. That’s the perfect example of to have bad intentions or not, and that’s why I’m pissed off. I know Santi very well, and we have a very good relationship out of the track, but of course, in the track there are things that you don’t do and if you you should get penalised. This is my opinion. In the end it’s a podium, not bad, and I’m pleased for the team and for Honda. Let’s try now to make up some positions in Race 2.”