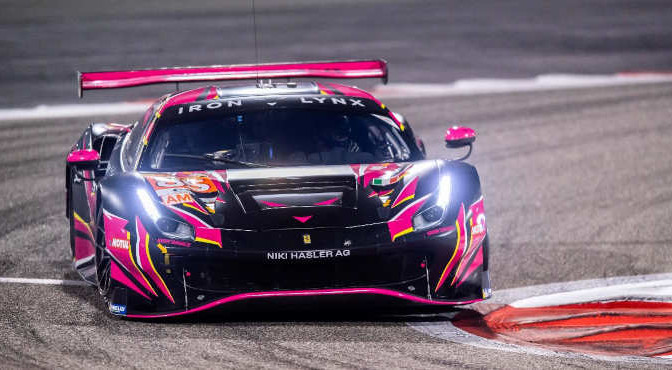 Italian racing team, Iron Lynx has completed its debut season of FIA World Endurance Championship in sweltering conditions of the 8 Hours of Bahrain, with fighting drives from both cars #60 and #85 to bring home sixth and ninth place at the final race of the season.

From the green flag, both cars started by Claudio Schiavoni and Katherine Legge respectively managed to hold station and keep a strong pace, with Claudio managing to gain some early spots in the first lap.

Matteo Cressoni took over duties for the #60 car and immediately started setting class-leading pace as they began to climb up the order. Katherine Legge was chasing down Satoshi Hoshino before a contact with the #777 Aston Martin, causing right front damage to the Iron Dames machine that would drop the car down the order, and take the team a few pit-stops to correct the damage.

Following her impressive qualifying lap , Sarah Bovy took charge of the #85 car under the resulting Full Course Yellow from Legge’s debris and was also immediately setting class-leading pace and began chasing the sister car of Cressoni. Meanwhile, Cressoni was lighting up the timing screens and gaining places, moving up to eighth place after passing Hoshino, Gomes and Christian Ried in the Dempsey Porsche.

After a short second stint for Claudio Schiavoni in the #60 car, Andrea Piccini stepped in for the first time and immediately set an incredible pace to keep gaining time. Now holding eighth spot and chasing compatriot Giancarlo Fisichella in the AF Corse Ferrari for seventh. Meanwhile, Rahel Frey was setting an electric speed in the Iron Dames car to maintain their tenth place that they worked so hard for after repairing the car earlier on.

Matteo Cressoni jumped back into the #60 and continued the strong pace set by Andrea during the previous stint. Sarah Bovy also got back into the #85 car after a strong performance from Frey to take the car to the chequered flag.

When talking about the team’s fortunes during the race, Iron Lynx team principle, Andrea Piccini, said: “It was an unfortunate situation with the Iron Dames car, but the driver in front was pretty slow and Katherine went in and it ended in some contact. Our mechanics did a great job to repair the car, and the pace has been pretty good, so it’s a shame they couldn’t do a better result, but that’s racing.

“The pace has been very good for the #60 throughout the race. Claudio did a great job in qualifying considering he didn’t race last week and didn’t know the track. In the opening stint of the race he managed to keep a small gap to the front. We played a good strategy with driver times, being also quite lucky with Full Course Yellows enabling us to pit twice under these conditions which helped. Matteo and I kept pushing hard throughout the race putting in the fastest laps and crossing the finish line in sixth place.”

The Iron Lynx will be back competing in the World Endurance Championship next season which will kick off at Sebring International Raceway on 18th March 2022 for the opening round.