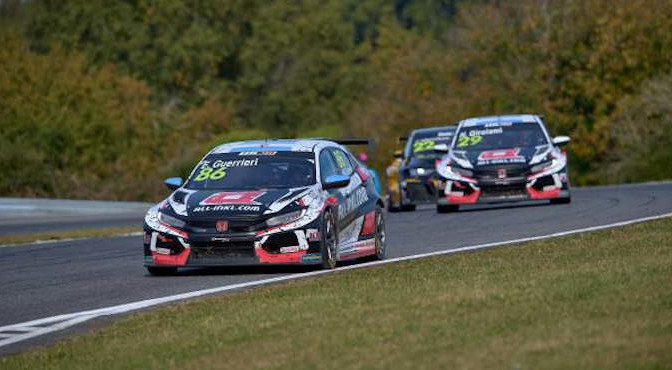 On a weekend where the Civic Type R TCR was far from the fastest car, Esteban executed both days of action well, losing only two points to the Championship leader come the end of Race Two.

He started the day with a smart drive to fourth in Race One, heading Nestor Girolami in what was a routine opener for the two ALL-INKL.COM Münnich Motorsport Civic Type R TCRs.

Another top-five finish appeared to be on the cards in Race Two, until the order was shaken up in a chaotic final few laps.

As the pack closed up, Esteban came off worst through the tight left-right chicane and dropped to seventh. He remained there until the finish despite attempting to overtake the points leader, who cut back across the track to block his line, on the final lap.

It means the Argentinian is third in the standings, 22 points from the summit, with two race weekends of the 2021 season remaining.

After finishing fifth in Race One, Nestor played an important role in Race Two, leapfrogging both Esteban and the points leader with a perfect start to run fifth.

Having allowed Esteban through, ‘Bebu’ then played the role of wingman by backing the pack up to protect his team-mate’s position.

Sixth place should have been his reward for that rearguard action, but Nestor lost pace as the race approached mid-distance and eventually stopped with what was diagnosed as a tyre delamination that left him with a suspension issue.

Despite that disappointment, ALL-INKL.COM Münnich Motorsport remain second in the Teams’ Championship.

Tiago Monteiro’s Sunday was something of a rollercoaster, with his best result of 12th in Race Two in no way indicative of his raceday potential.

From 10th on the grid in Race One, the Portuguese had an excellent launch and was in contention for eighth, only to be hit from the side on the approach to the Turn 3 hairpin.

Tiago was a passenger from there as his car slid into the barrier at high speed, with the right-rear suspension broken in the impact.

The ALL-INKL.DE Münnich Motorsport team nevertheless worked frantically during the allotted repair time prior to Race Two and sent the Civic Type R TCR out 30 seconds before the pitlane closed, allowing Tiago to take up 11th on the grid.

Having again made up ground off the line to run in the top 10, Tiago was forced off midway through Race Two and dropped down the order, but made up positions before the finish to reward his crew’s efforts with four points.

Team-mate Attila Tassi also recorded a best finish of 12th despite also being the innocent victim of a big hit in Race One.

From 18th on the grid, Attila managed to climb five positions through the opening corners before being turned in on by the car on the outside.

He was able to continue, however, and advanced another position before the finish to take away four points. Race Two proved more difficult but the Hungarian was still able to make up ground, eventually finishing 16th.

Esteban Guerrieri 86
ALL-INKL.COM Münnich Motorsport
It was quite a positive Sunday. We finished both races – that was not guaranteed considering the bruising races we saw – and we scored good points and managed to more or less maintain the gap to the points leader, despite having a slower car here. Race Two was distorted a bit by one of the cars ahead having a problem. When the pack got bunched up, everyone was attacking and hitting me, and that set the tone for the final few laps. Despite that, the car stayed in one piece so I’m quite happy with the results. We’re getting into the final straight of the championship, and will be giving it a big fight until the end.

We had a really good Race One and scored quite a lot of points for the team, but Race Two was a bit more complicated. I got into a really good position at the start by overtaking the Championship leader with a really good launch. Having let Esteban through, I was controlling the pace when suddenly I got a vibration and started to feel the steering going strange. Two laps later I pitted and we discovered it was a tyre delamination, and there was something broken on the suspension. We’ll need to check the car because we had something similar at Most, but we have a small break again now so I’m sure the team will go over everything.

It was an interesting weekend and the races, as expected, were rough. Unfortunately I got a hit in the first race that put me in the wall. I thought it was over after that, but the team and the mechanics did a fantastic job to repair the car in very little time to get me back out. I want to say a big thank you to them for that. The second race was OK; I got a good start and was in the top 10 before I was pushed out by another competitor, but here there’s no easy overtakes – it’s just annoying it cost me three positions. Overall it was a shame, but the car felt good and we were at least able to score a few points.

After a very disappointing qualifying, today was about scoring as many points as I could and I got that in Race One. In the first braking zone I had a huge impact from the left side and something was a bit off with the steering, so I couldn’t really turn right, especially in the medium- and high-speed corners. Considering the majority are to the right, it was tough to keep the pack behind me, but I managed to survive and was happy with 12th place. In Race Two there was more of a train and my tyres were slightly older, so by the end I had quite a lot of understeer. Hopefully qualifying at Adria will be much better.

There are some mixed feelings considering how today’s races played out. Looking at the positives though, Esteban and Nestor did a perfect job in Race One and scored vital points for the Teams’ Championship. The team also did a fantastic job to repair Tiago’s car in such a short space of time before Race Two. It was great just to have the car out there and ready to go, so the fact he was able to finish 12th despite more contact was a small reward. Attila also made the most of the chance he had in Race One to add more points.

We can be happy that all four drivers maximised the points-scoring opportunities they had. There was a lot of contact, and the strength of the Civic Type R TCR has definitely been proven today, but all of them came through that well. Esteban did very well to manage the gap to the points leader, despite the pace of the competition this weekend and a bruising final few laps in Race Two, while Nestor was really unfortunate not to score points – he was the perfect team-mate. It’s a real shame we didn’t get to see Tiago’s potential in Race One considering his excellent start, but Attila recovered well to get points. Next we go to Adria, which we expect to be another tough event.