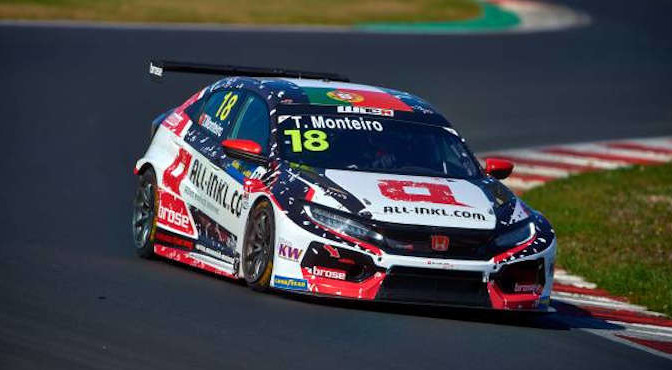 The series’ maiden visit to the 3.030-kilometre circuit comes immediately after a successful round at Most, where two drivers achieved firsts for the season: Nestor Girolami took his first win, while Esteban Guerrieri landed his first podiums.

Those results had a profound effect on both the Teams’ and Drivers’ Championships, with ALL-INKL.COM Münnich Motorsport and Esteban both now second in the respective standings.

Nobody scored more points in Czechia last weekend than Esteban, who followed up his second place to Nestor in Race One with a third-place finish in Race Two.

The Argentinian heads to Pau-Arnos in a buoyant mood, confident he has the tools at his disposal to carry over the form he and the Honda Civic Type R TCR showed at Most.

Incidents for which he was not to blame limited Nestor to a solitary point in Race Two at Most, but he nevertheless improved to seventh in the standings and is less than 10 points off a place in the top five.

Like Esteban, ‘Bebu’ is looking to build on both a first visit to the podium since the opening round of the season at the Nürburgring in June and the positive momentum that came with it.

There is optimism in the ALL-INKL.DE Münnich Motorsport camp too, with Tiago Monteiro and Attila Tassi taking the positives from a difficult weekend.

Tiago remains in sight of the top 10 in the standings, having salvaged five points from a bruising raceday at Most, and is eager to get to grips with what he predicts will be an enjoyable layout.

He has pedigree in France, and finished runner-up in the most recent World Touring Car race to be held in the country at Paul Ricard five years ago, driving a Honda Civic WTCC.

Attila meanwhile endured a luckless weekend in Czechia but is just four points shy of his team-mate in the Drivers’ standings.

Having experienced Pau-Arnos in the simulator, like his Honda Racing team-mates, the 22-year-old expects the track to suit the Civic Type R TCR but knows the importance of a trouble-free run when practice begins on Saturday morning.

We head to Pau-Arnos with some really good momentum from last weekend, where it was great to get on the podium in both races and kickstart my season. It will be a bit of a step into the unknown again, but we know what our strengths and weaknesses are and of course have put in the practice on the simulator to get an understanding of the track. Hopefully it is a good one for us as there are sequences of flowing corners, but we’ll also have to live with a heavy car again. That’s not an excuse, though; there are bound to be possibilities, so if they are there let’s try to grab them.

Getting the first victory of the season was a great feeling and an important target to hit, but we don’t want it to stop there and will be pushing for more this weekend. Even so, we know we did not have the fastest car at Most and it will be a big fight again at Pau-Arnos, but we are ready for that. The aim remains the same as it has been for some races now – my eyes are firmly on making sure I can make the top 10 in qualifying and then maximise the opportunities that come my way from there.

After a frustrating weekend at Most it’s good to have another round immediately afterwards to try to respond. We saw last weekend that the pace was in the car, so without the mechanical issues that we had with my car there I hope we can show good speed. The season is far from over and my attention switched immediately to Pau-Arnos after Race Two. It’s a new circuit for us and for everyone, although some of our competitors have been testing there so let’s see how we do. It looks like an exciting track, so it will be good to get out there in practice.

It has been a tricky couple of rounds where we probably hoped for a bit more, but last weekend proved the pace is there so hopefully we are able to fulfil our potential this time with a good all-round performance and put some proper points on the board to begin climbing the standings again. It’s another new track for me, which I’ve only done in the simulator. It should suit our car, but we expect some of our rivals to have a bit of an advantage when it comes to knowledge, having tested there already, so let’s see at the weekend how things go.