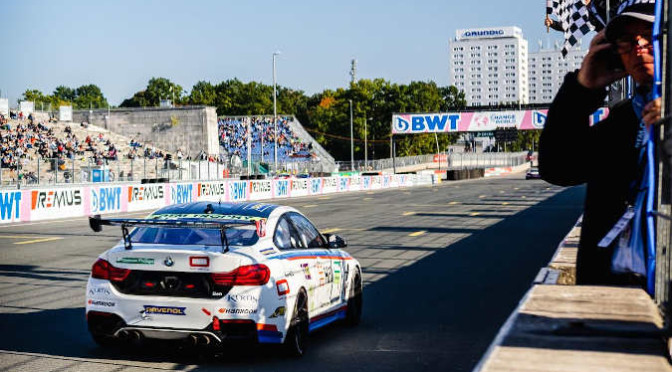 Ben Green is the 2021 DTM Trophy champion. In a thrilling final race in the junior race series on the professional DTM platform, the Brit came out on top. With the FK Performance Motorsport BMW, Green secured the championship title by virtue of his fifth win of the season. His only remaining rival in the battle for the title, British Mercedes-AMG driver William Tregurtha (CV Performance Group) had to make do with second place, both in the race and in the final standings.

Green started the final race of the year from fifth on the grid and immediately made up two positions at the start already. After that, the Brit was third behind his fellow BMW driver Michael Schrey (Hofor Racing by Bonk Motorsport) and Tregurtha, who had started from pole position. That would already have been just enough: like that, Green and Tregurtha would have been tied on points with Green being crowned on countback with a higher number of wins over the season. Earlier on, Tregurtha had reduced his gap to three points with his pole position for the Sunday race.

A bit further down in the field, there was a crash just after the start, putting an end to the race for four cars on the opening lap already. BMW drivers Gabriele Piana (ITA/Hofor Racing by Bonk-Motorsport) and Moritz Löhner (GER/FK Performance Motorsport), Toyota driver Stéphane Kox (NED/Ring-Racing), who had caused a surprise by qualifying third, and KTM driver Reinhard Kofler (AUT/True Racing by Reiter Engineering) were unable to continue their race.

After an extended safety car intervention, Schrey moved up into the lead at the restart while Tregurtha and Green were fighting wheel-to-wheel for second position. Soon, that turned out into the battle for the race lead: Schrey had accelerated too early at the restart and therefore was called in for a drive-through penalty. On the 21st of 32 laps, Green finally found a way past Tregurtha. However, the Mercedes-AMG driver didn’t give in that easily and started a counter-attack while still on the same lap. Green successfully turned down the attack and Tregurtha even dropped back to third behind Walkenhorst Motorsport driver Theo Oeverhaus (BMW).

On the final lap, Tregurtha claimed back second place. However, there was no possibility for an attack on Green anymore. The BMW driver crossed the finish line as the winner and the new DTM Trophy champion. Belgian Toyota driver Nico Verdonck (Ring-Racing) was classified third as he benefited from a 30-second time penalty for Oeverhaus. Behind Green’s teammate Yann Zimmer from Switzerland and the latter’s compatriot Lucas Mauron (Audi/Heide-Motorsport), Mauron’s teammate Sophie Hofmann came home sixth as the best-placed female driver. Kofler’s Austrian teammate Laura Kraihamer finished eleventh.