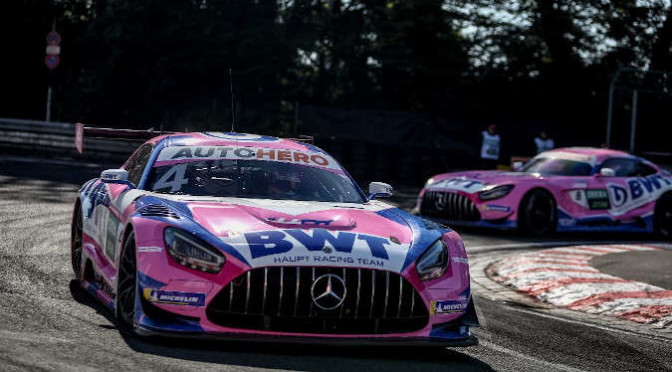 Drama, tears, spectacular racing and boundless joy – in front of a huge crowd, DTM Norisring powered by BWT provided an action-packed finale. Eventually, one driver cheered in particular: Maximilian Götz! After the finish, the 35-year-old from Uffenheim was celebrated in overwhelming style as the new DTM champion, in the presence of Markus Söder, prime minister of Bavaria. With the Mercedes-AMG of the HRT team, Götz was in control at Norisring. Having already won the Saturday race, he was also first across the finish line on Sunday. “For me, this is a dream coming true! I am speechless and simply overjoyed,” a buoyant Götz said on the radio after the race, not holding back his tears.

With his title win, Maximilian Götz became the successor of Audi works driver René Rast, who didn’t participate in DTM this year, but will be returning for 2022. Götz had the last laugh as Liam Lawson and Kelvin van der Linde, the two drivers who had started the final races as favourites, remained empty-handed in a dramatic race.

“I gave it my all and I was pushing all the time. I wanted to use my chance, no matter what, and in the end, we succeeded. Once again, qualifying was our weakness, our pit stop again was our strength. I can only thank Mercedes-AMG and our team owner Hubert Haupt for having given me this confidence and this opportunity,” Götz commented. “Eventually, it was a team success. But this team success was only possible because in the end, we were in this situation and used it. Now, I am looking forward to a big party and I rather get soaked in champagne than in the Dutzendteich lake, even though that is a tradition here at Norisring.”

In contrast to Götz, disappointment and anger were considerable for Liam Lawson: “I am obviously very disappointed and gutted for my whole team. My team really deserved this title. Being taken out by the same guy over and over again says it all. Turn one, lap one of the race, what can you say,” the 19-year-old New Zealander expressed his deep disappointment. Kelvin van der Linde, meanwhile, made a considerably more composed impression: “The many fans in the grandstands got to see quite a bit today. My big trophy for third place in the championship is a reward for my team that has always given me a car that was perfectly prepared. And in 2022, we will be attacking together again.”

DTM boss Gerhard Berger was hugely satisfied: “Our most important goal for this year was to create stability. That is what we have achieved. We have had great racing with first-class drivers and teams. In spite of all the uncertainties, we have been able to stage eight great events. DTM Norisring powered by BWT was a very successful finale with incredibly spectacular races. Norisring is the backbone of DTM. This weekend, we had a fantastic crowd; nice, that things like that are possible again. Developments are certainly going into the right direction, there are many positive signals and we are confidently looking forward to 2022.”

It was a spectacular race at the unique street circuit. In the first corner after the start, the championship leader was already dealt a big blow. Lawson, who had started from pole position directly alongside van der Linde, had a commanding lead when a courageous manoeuvre by the 25-year-old South African failed and resulted into contact with the Red Bull Ferrari. As a result, Lawson was out of contention, even though he was still cruising at slow speed around the 2.3 kilometres long Norisring, running in last place throughout the race, still waiting for a miracle to happen.

The second drama struck Kelvin van der Linde. When he rejoined the race after his late mandatory pit stop just ahead of Götz, running on cold tyres, a duel unfolded that also played a decisive role. Van der Linde did everything to stay ahead of Götz. Eventually, there was contact in which Götz needed luck and skills to keep his car in control while van der Linde incurred a left rear puncture and dropped out of the point-scoring positions following a spin and a tyre change. That cleared the way for Maximilian Götz, whose fellow Mercedes-AMG drivers, first and foremost the two WINWARD drivers Philip Ellis (SUI) and Lucas Auer (AUT), who was leading the race at that point, allowed him through. Eventually, Götz won from Auer and Maximilian Buhk with the Mücke Motorsport Mercedes-AMG, equipped with the innovative Space Drive steering system from Schaeffler Paravan.

Sophia Flörsch also had a good end to her season, finishing ninth with the ABT Audi and therefore scoring points for the second time this season.

On Saturday, Ferrari team Red Bull AlphaTauri AF Corse had already secured the title in the teams’ standings. At Hockenheim one week ago, Mercedes-AMG had been crowned as manufacturers’ champions and a few weeks earlier, Liam Lawson had already won the junior title early.

DTM gets its new season underway at  Portimão in Portugal from 29 April-1 May 2022.