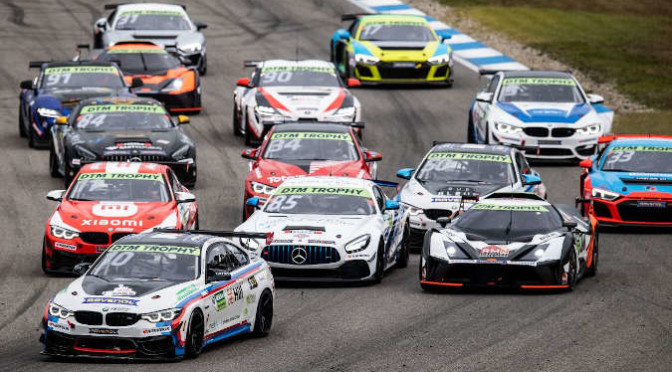 Just like in DTM, the battle for the DTM Trophy title is still open as well. Only three little points are separating the two title candidates Ben Green and William Tregurtha prior to the two decisive season races 13 and 14 at Norisring this weekend (8-10 October). Green or Tregurtha, that also means BMW or Mercedes-AMG. Only one thing is clear: the successor of last year’s champion Tim Heinemann will be coming from the UK. Last weekend, Hockenheim got to see two spectacular DTM Trophy races and it will hardly be any different at Norisring. “Racing will be very intense,” challenger Tregurtha predicts.

Ben Green, meanwhile, was already well underway in the Motodrom in Baden-Württemberg to put his hands on the crown. With the FK Performance Motorsport BMW, he claimed pole position on Saturday and on Sunday and was first across the finish line in both races, but he lost his victory on Saturday as a result of an unfortunate penalty because he hadn’t properly kept the distance to the safety car due to a technical problem. Instead of the maximum score of 56 points, his total amount over the weekend was only 33. Drama for Green, therefore, but also for Tregurtha. After the turbulent opening lap on Saturday, he found himself at the back of the field, but worked his way up again with a spirited drive to finish in second place.

The two Brits are receiving intense support from their teams in the battle for the title. While Green is already in his second season racing for FK Performance Motorsport from Bremen, having ended up fourth last year, Tregurtha is a newcomer in DTM Trophy, just like his team CV Performance Group from Niederzissen near the Nürburgring. “Ben simply is a complete racing driver,” FK team principal Martin Kaemena says. “His focus is on setting up the car and working together with the engineers. His technical understanding is top-notch.” Kaemena sees Green’s GT3 experience as the reason that he is able to find the right set-up quickly. “Moreover, he is super as a person, very serene. And over the winter, he has made extreme progress in terms of mental strength in particular.” For Kaemena, it is clear: “We plan to continue our co-operation with Ben next year as well.”

Christian Voß is fully convinced by his driver William Tregurtha and full of praise. “William is an absolutely professional racing driver. He is working with great focus, also within the team. We also appreciate his close co-operation with his young teammate Mathias Salonen,” says Voß, who, after his numerous achievements in karting, decided to enter DTM Trophy in spring. “In the morning, William is the first one to arrive and in the evening, he is the last one to leave. He has great interest in the technology and is having a say in all relevant matters, something I really appreciate.” Asked about Tregurtha’s strengths, Voß mentions his calmness, his concentration and his experience, but he also adds that the Brit sometimes has slight difficulties in dealing with criticism. For Tregurtha, there is no such thing as pressure prior to the finale. “He is the most relaxed person in the team. All the engineers, the mechanics and I are much more nervous.” Voß also has a clear plan, wants to continue his co-operation with Tregurtha in 2022 and if possible even intends to run four cars in DTM Trophy. With a view to the Norisring finale, the CVPG team principal says: “Now, Will and I are standing here at the end of the season and we are in contention for the championship. That is something nobody had expected as this is the first year with the production-based GT sports cars for us.”

For Green and Tregurtha, conditions are almost identical: a difference of only three points and no previous experience at Norisring. “I have never been to Norisring. But I love street circuits. Norisring is something unique and it is an honour for me to be allowed to race there,” Tregurtha is looking forward to the duel with his compatriot Green, with whom he has been following an identical career path in the motorsport world for years. “The track looks exciting. I am confident going into the races and I want to battle until the chequered flag in the race on Sunday to seal the title,” Green leaves no doubt about his determination.

The DTM Trophy title is the clear goal for both, but only one of them can become the champion in the junior race series that is the DTM Trophy. The goal of graduating into DTM for 2022 is something both of them can reach. After all, the qualities of the two Brits will certainly not have gone unnoticed by the DTM team principals.