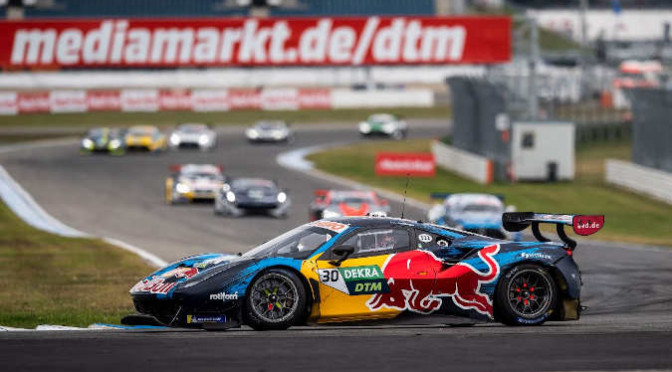 Days of thunder at DTM Norisring powered by BWT! For the first time, the street circuit in Nuremberg serves as the ultimate stage for the showdown in the traditional race series. Liam Lawson, the only 19 years old New Zealander with the Red Bull Ferrari, or South African Kelvin van der Linde, by six years his senior, with the ABT Audi, that is the question. Who will win the hotly-contested DTM title, who will become the successor of three-time DTM champion René Rast? Local hero Maximilian Götz (GER) with the HRT Mercedes-AMG is also still in contention and purely mathematically, Marco Wittmann with the Walkenhorst BMW also still has chances of winning the title that is quite highly acclaimed in international motorsport. Motorsport experts know that anything, really anything can happen at the only 2,300 metres long Norisring.

Exactly that is what makes this short, but challenging race track around the stone grandstand, steeped in history, so interesting for the fans as well. They are really close to the action and nowhere else are the race cars roaring past more frequently, almost twice as often as on usual tracks, with a total of 69 laps expected for each of the two DTM races. Norisring is also famous for its unique atmosphere at the Dutzendtzeich, for the access for the fans in the open paddock and the Fan Village with an activity programme and DJs.

Norisring – that is a long tradition in German motorsport in general as the inaugural race was already held at the Zeppelinwiese in 1947, and also in DTM. Since 1984, 46 DTM races were held there already, always in the middle of the summer. Following the cancellation last year, the Covid pandemic required a postponement of the event, originally scheduled in July, for this year and now, Norisring will get to see the heart-stopping finale of the 2021 DTM. The weather forecast for the weekend is promising. It is the ultimate challenge for all drivers and teams and the ultimate action factor for the fans. After all, speeds of up to 260 km/h are reached at the non-permanent race track. The calculated lap time is just below 50 seconds (49.6s) and the race distance is estimated at 69 laps. Especially the brakes are under an extreme load at Norisring when drivers are braking heavily from 260 to around 47 km/h for the Grundig hairpin, and that almost 70 times. On top of that, for 67 percent of the lap, the cars are under full load. A real test for man and machine.

Now, the finale is there, and the situation could hardly be any better. 206 to 192 is the points’ situation between Lawson and van der Linde. Lawson has scored three pole positions and three wins, van der Linde five pole positions and four wins. And Maximilian Götz at 180 points and Marco Wittmann at 165 points shouldn’t be ruled out either. Nobody as previous experience with a GT race car at Norisring, that is the first challenge. For Lawson and his team, Norisring is totally uncharted territory while van der Linde can rely on the experience of 25 races and twelve podium results for the ABT team at Dutzendteich since 2000 and as already raced here himself in the Scirocco Cup. When he manages to maintain his points’ advantage, Liam Lawson would become the youngest-ever DTM champion at 19 years. And for the Red Bull Junior, who is firmly focussed on Formula 1, in spite of all his praise for DTM, this title would come exactly at the right time. For the finale, the Kiwi is getting support from New Zealand, his home country, where the DTM finale is even broadcast live on TV. Because Alex Albon has to fulfill his commitments as a Formula 1 replacement driver for Red Bull Racing during the Grand Prix in Turkey, New Zealander Nick Cassidy will be taking over the AlphaTauri Ferrari with starting number 23 for the first time. And the 27-year-old already knows Norisring from his Formula 3 days in 2013 and 2016. Including Lucas di Grassi, the ex-Formula E champion in the fourth ABT Audi, the DTM field will include 20 GT race cars in the Franconian metropolis.

Days of thunder are imminent at Norisring, an extraordinary “Speedweekend”. Not only because of DTM, looking back upon a spectacular season, but also an action-packed motorsport programme with the junior race series DTM trophy with production-based GT sports cars, DTM Classic Touring car legends, BMW M2 Cup, P9 Challenge as well as demonstration drives of DTM Electric and BMW Legends. DTM itself already has a world-class drivers’ field, but outside of DTM, it is a ‘who is who’ of racing as well at Norisring with drivers like Hans-Joachim Stuck, Klaus Ludwig, Christian Danner, Kurt Thiim and Klaus Niedzwiedz in DTM Classic as well as Johnny Cecotto, Leopold von Bayern and Norisring record winner Bruno Spengler.

Tickets are available until the event day, online from the DTM-Ticket-Shop (tickets.dtm.com) and from the DTM Ticket Hotline (+49 1806 99 11 66). On Saturday and Sunday, the DTM races (start at 1.30pm on both days) will be broadcast live on SAT.1 from 1pm and in over 60 countries.

“I am looking forward to Nick (Cassidy). He knows the car and he knows Norisring, too. It depends on qualifying, whether he will be able to get himself into a good position for the race.”

“For me, the Saturday will be particularly difficult, especially as the additional weight will have its effect at Norisring.”

“My most difficult race was the second race at Hockenheim. The additional weight made life really difficult for me at that track.The best race was the one at Red Bull Ring with the intense fight with Marco (Wittmann).”

“I already drove my first races on the computer when I was a kid, I have loved sim-racing since I was twelve. Recently, I was in a Formula 1 simulator for the first time and there you even feel the g-forces. Sim racing is becoming more and more important and Moritz (Löhner) shows that one can actually step from sim racing into a real race car straight away.”

“Norisring is very short, exciting and really cool, but also very bumpy. That will be a new experience!”

“It was a cool time together with Alex (Albon). Nick (Cassidy) has always been closely involved with the team and he knows Norisring and the car, I am sure he will find his way quickly.”

“What is next for me is for Red Bull to decide. I can only say that I love this championship, it is really great. It provides a high level with very intense cooperation with the manufacturer and the team.”

“Hockenheim was extremely emotional. As a team, we are a family. On Sunday at Hockenheim, it was ultimately not about the sport, but about Manuel. He is currently recovering from surgery. I spoke to him on the phone yesterday, he said that he is keeping his fingers crossed for us. That gives us the extra motivation that we will be needing at Norisring.”

“I am totally happy with where we are. Liam (Lawson) has a heavy load on his shoulders as he is the one everybody is after. Now, he will be having the sleepless nights before the race. I know what that feels like. At Hockenheim on Saturday, I made up 16 points on a single day, so it is also possible to make up 14 points.”

“The Saturday race at Nürburgring was my best race, from qualifying, we were totally in control. Red Bull Ring was hard, but my team made it a highlight. The second race at Hockenheim was the low point, already because of Manu.”

“When it is raining or during the lockdown, I drove a lot on the sim. As recently as last year, I often drove in the DTM simulator at Audi. I am investing a lot of money in my equipment, I am using hydraulic pedals and a steering wheel like in the Audi R8. Simulation is an important tool.”

“I have fond memories of this track, I already won a Scirocco Cup race there. The bumpy braking zones in particular are special.”

“Concerning the pit stops, we will have to see together how we can make it still safer. Perhaps the engine has to be switched off and can only be restarted once the car is on the ground. One has to think about it seriously. But like in Formula 1, performance pit stops are part of the good show.”

“Of course, I have been talking with René (Rast, still the reigning DTM champion) at Hockenheim. When he won his first title, he made up 21 points during the final weekend.”

“Liam (Lawson) has 18 kilograms of extra weight on board on Saturday. There is no other track on the calendar where you really notice every additional kilogram that much under braking and acceleration.”

“Yes, I believe that this weekend is the most important in my career.”

“About my final plans, I can’t say anything yet, but let’s wait for this weekend.”

“I want to enjoy the final race weekend of the season. I am totally relaxed and I will give it my all at my home track. First of all, we need to find back our pace. To win the title, I really would need a lot of luck.”

“Assen was my strongest race, especially that I was able to win the race in spite of the time penalty. No doubt that Hockenheim was the most difficult weekend for us.”

“Of course, I drove in the class 1 simulator at BMW, but sim racing at home, I am rather old-school in this respect.”

“As a kid, I already was at Norisring as a spectator quite often. Especially my DTM race win there in 2018 was very emotional. Basically, there are just four corners, but then, even the slightest mistake is enough and your lap time is gone. You have to get really close to the wall, that is the challenge. However, there often is a bit of chaos in Turn 1. At this track, anything can happen.”

“The biggest change is coming with the new car, the BMW M4 GT3, so therefore, I would like to continue in DTM.”

“I am really looking forward to racing at Norisring again. I have already been very successful at this track and I have very good memories of the Audi V8 quattro.”

“I can only say that Liam (Lawson) is doing a fantastic job. It isn’t the car, it is him making the difference. He is in excellent shape and I would be happy to see him winning the title.”

“When I am looking back one year and see where DTM is now, that is fantastic, super cool. The entire crew around Gerhard Berger has been doing a top job. DTM is on a great way!”

“My sons are into sim racing and sometimes, we are racing together. Then, I am frustrated that they are much better. Perhaps I should practice more in winter to be able to keep up with them. Sim racing absolutely is very good preparation, so close to reality, simply great.”

“I would put my money on Kelvin (van der Linde), but I also have to say that Liam (Lawson) is doing a remarkable job.”

“Norisring will be very emotional for me. So far, I have only always been there as a spectator and now I am in the race car myself. The track is tricky, but will certainly be a lot of fun as well.”

“For next season, nothing has been finalised yet, but I would like to race in DTM Trophy again and then be a contender for the title.”