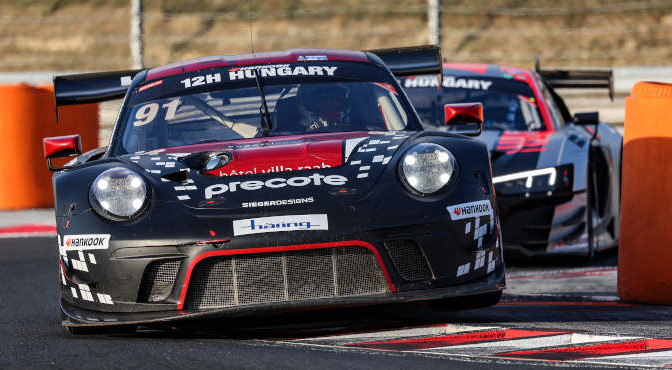 Now on alternate refueling strategies, both teams continued to swap the lead throughout the afternoon until scintillating stints from Herberth Motorsport at three-quarter distance allowed the Bavarian squad to pull ahead.

Herberth Motorsport eventually completed 367 laps of the 4.381km Hungaroring en-route to its fourth victory of the season. The result simultaneously marks the sixth consecutive win for a Porsche in the 24H SERIES in 2021.

“It was a cool race for us,” Alfred Renauer explained to radiolemans.com’s Lukas Gajewski. “This was a very hard fight with the CP Racing car, because they had a good strategy, so we had to give it our all. Thanks to the whole team. They did a great job, like the whole season, and I’m really happy with this result. Hopefully we can do this again in Sebring!”

In a courteous gesture to its fellow Audi customer, long-time podium contender Car Collection Motorsport (#500, Martin Rump / Martin Lechmann / Nathanaël Berthon) moved aside in the closing stages of the race to allow Rutronik Racing to maximize its points in the title hunt. A near-flawless run for Car Collection Motorsport was blighted only by a faulty radio, which led to miscommunication between driver and mechanics, and the Audi running out of fuel on-track in the early going.

The RD Signs racing team Lamborghini Huracán Super Trofeo (#720, Audrius Butkevicius / Nicola Michelon / Paulius Paskevicius) finished 7th in the GT division to secure a hard-earned GTX-class win. Running the 12-hour event without ABS, the Raging Bull first lost time in the gravel trap – which brought out the fifth of the event’s seven Code 60 caution periods – and twice lost its right rear wheel on its way onto pit road. The Lithuanian team’s efforts were aided however by the Vortex V8 Vortex 1.0 (#701, Philippe Bonnel / Gilles Courtois / Nicolas Nobs), which finished 2nd in-class but fell an hour behind its category rival at the beginning of the event with alternator problems.

Despite late-race drama for the ST Racing BMW M4 GT4 (#438, Samantha Tan / Chandler Hull / Jon Miller), which suffered a broken diff mount quite literally at the 11th hour, the Canadian team recovered to finish 8th in the GT division and secure its third GT4-class win of the season. The result moves ST Racing to the top of the Overall GT Teams’ standings, narrowly ahead of Vortex V8.

“This was a great race,” Jasmin Preisig explained to radiolemans.com’s Lukas Gajewski. “We had no problems, we always had good pace, and we are very happy with this result. It’s probably the biggest win for us, and an important one for Greenhope and Sport against Cancer.”

The season finale of this year’s 24H SERIES powered by Hankook will be held on 18-19-20 November at the Sebring International Raceway in the United States of America. The inaugural Hankook 24H SEBRING will mark the first time that the Floridian circuit has hosted a 24-hour international motor race. Further details can be found on www.24hseries.com.