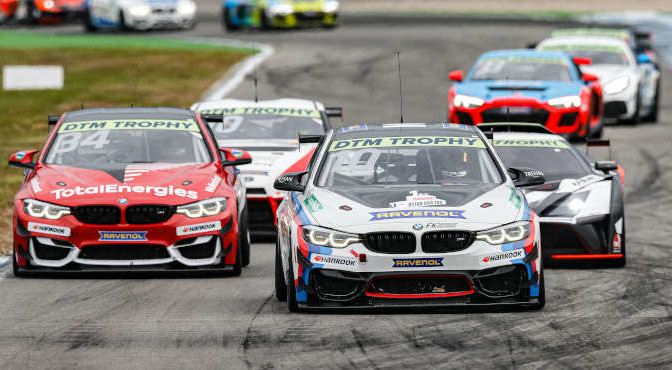 Ben Green was the man of the day in DTM Trophy at Hockenheimring. The British BMW driver of the FK Performance Motorsport team won a spectacular Sunday race in the junior race series on the professional DTM platform. Exciting wheel-to-wheel duels and changeable weather spiced up the action even more.

Green kept his cool throughout the race distance of 18 laps and controlled the race at the front. A poor restart after a safety-car intervention at the start of the race also left him unfazed. Green temporarily lost two positions to Austrian KTM driver Reinhard Kofler (True Racing by Reiter Engineering) and BMW driver Theo Oeverhaus (GER, Walkenhorst Motorsport. However, Green caught both of them again within only one lap.

Later on, Green also remained on top of things after an interruption due to rain with six minutes remaining. On rain tyres, he held on to the lead until the end. With his fourth win of the season, Green also claimed back the lead in the drivers’ standings from his compatriot William Tregurtha. The driver of the CV Performance Group Mercedes-AMG took the chequered flag in second place following a charging recovery drive. In the drivers’ standings, Green is now leading Tregurta by 204 vs 201 points. That guarantees a thrilling title battle in the 13th and 14th race of the season at the Norisring in Nuremberg next week (8-10 October).

On the opening lap, Tregurtha became the victim of a collision behind him in which he was tapped into a spin. That saw the Brit drop to the back of the field and he made up his first positions as his Finnish teammate Matias Salonen was losing fluids from his car. On these fluids, some drivers spun in the Motodrome. The stopped Mercedes-AMG prompted the early safety car intervention. After the restart, Tregurtha quickly progressed into the top five. Later on, he was involved in a longer battle with Belgian Toyota driver Nico Verdonck (Ring-Racing) and Kofler for third place. Only after the interruption because of the rain, Tregurtha found a way past the two. On the final lap, he also caught Saturday race winner Oeverhaus, who finished third as a result.

Verdonck and Kofler brought fourth and fifth place home. Behind them, Swiss Audi driver Lucas Mauron (Heide-Motorsport) and Verdonck’s teammate Stéphane Kox from The Netherlands crossed the finish line. That made Kox the best-placed female driver in the field once again.