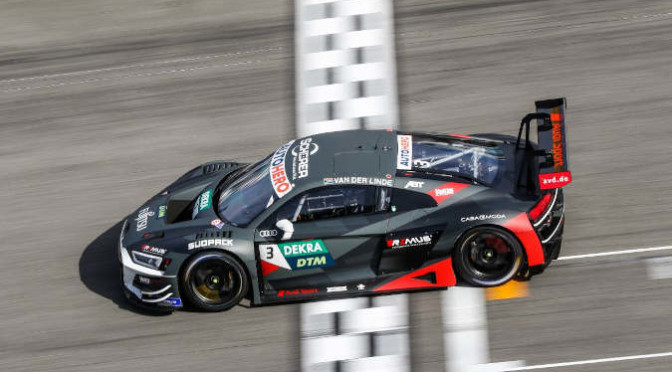 Unbelievable excitement until the chequered flag in the DTM thriller at Hockenheim and a surprising farewell at the end: Kelvin van der Linde and Liam Lawson are equal on points with 188 points after 13 of this season’s 16 races. Also tied at 165 points are Marco Wittmann and Maximilian Götz, who are next up in the drivers’ standings. Two-time DTM champion Wittmann remained without any points for the first time this season after innocently having become involved ina collision on the opening lap. What a set-up for the Sunday race at Hockenheim and the grand DTM finale in one week’s time at Norisring. In the post-race press conference, Mike Rockenfeller surprised with the announcement that he will be leaving Audi at the end of this season after 15 years.

Rockenfeller’s teammate Kelvin van der Linde was the man of the day. With the Audi of the ABT team from Kempten, the South African converted his pole position into a dominant race win. Alex Albon (THA) finished second with the AlphaTauri Ferrari while his teammate Lawson only lost third place on the podium to a charging Rockenfeller. Maximilian Götz (GER), who had started the race fourth in the drivers’ standings, took the chequered flag in fifth place with the Mercedes-AMG of the HRT team.

“That was a very important victory. This success was overdue, especially for the team,” a buoyant Kelvin van der Linde, who had been leading the drivers’ standings from the season opener at Monza until Assen, commented. “For the first time after a long while, my parents are present, too. I am really happy to score a win in their presence.” Alex Albon also was visibly happy: “From ninth place on the grid, it was quite turbulent on the opening lap, but I was able to stay out of all the action. The restart worked out well, too and after that I was able to gradually wor my way up, even though this track doesn’t particularly suit us. Of course, I thought about helping Liam (Lawson), but I couldn’t take too much risk, especially with Mike (Rockenfeller) quickly catching up from behind.

Rockenfeller leaves Audi at the end of the season

Mike Rockenfeller showed a spirited drive, finishing on the podium from 17th on the grid. “After the disappointing qualifying due to a technical issue, this is a great result, of course. On the final lap, it was quite tough in the battle with Liam (Lawson), it was on the limit for both of us.” Then, however, the Neuwied-born driver who became DTM champion once with Audi and also won the Le Mans 24 Hours, surprised by announcing his departure from the Ingolstadt-based car manufacturer: “Now, time has come to start a new chapter: I will no longer be racing with Audi in DTM next year. I would like to express my thanks to Dr. Wolfgang Ullrich and Dieter Gass for all the chances they have given me at Audi. Now, it is time for a new challenge. I have been enjoying my time in DTM to this day, especially this season, it really is great fun again.”

The big loser on Saturday was Marco Wittmann. The two-time DTM champion already was down the order with 13th place in qualifying and in the race, bad luck hit him on the opening lap already. When Indian Arjun Maini was too optimistic going into turn six on the inside, the driver of the GetSpeed Mercedes tangled with his fellow Mercedes driver Lucas Auer (AUT), the race winner at Assen on Sunday. Auer spun while Wittmann was unable to avoid Maini’s swerving Mercedes. For Auer and Maini, the race was over on the spot while Wittmann tried everything to still score the odd championship point with the damaged Walkenhorst Motorsport BMW. As these efforts finally turned out to be in vain, Wittmann parked his car in the pits. Until Hockenheim, Wittmann had been the only driver to have scored points in every DTM race. This streak has now come to an end.

When racing resumed on lap six after Maini’s Mercedes had been recovered, Kelvin van der Linde was leading from Götz, Lawson und Philip Ellis (SUI, WINWARD-Mercedes-AMG). The mandatory pit stops with tyre changes mixed up the order as usual, but 25-year-old Kelvin van der Linde controlled the race at any time. Behind him, however, the battle for points and positions was on in full swing. Be it Timo Glock (GER) with the ROWE BMW against DTM rookie Marvin Dienst (GER) with the Mücke Mercedes or Glock against DTM runner-up Nico Müller, who even spun his Rosberg Audi without contact.

Much to the delight of the spectators in the grandstands and in the paddock, excitement in the race increased lap after lap. Temporarily, it even looked as if Lawson would be able to claim second place with help from teammate Albon, but then Rockenfeller toppled the New Zealander from the podium on the final lap and Lawson even had to prevent Götz from getting past as well. A podium finish would have meant a continuation of the points’ lead for Lawson, but it turned out into a tie that is making DTM even more exciting.

The next episode of the thriller will follow on Sunday at 1.30pm (live on SAT.1 from 1pm), again at Hockenheim. The grand DTM finale with the two final races of the season is following one week later (8-10 October) at the Norisring in Nuremberg.