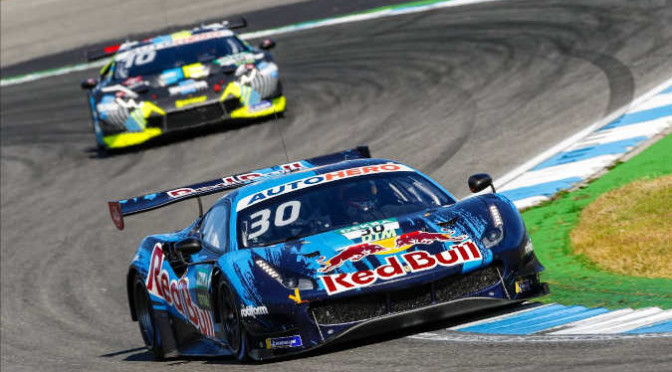 In the four-way DTM title battle, the heat is on! ABT Audi driver Kelvin van der Linde, who lost his lead in the drivers’ standings last time out at Assen, keeps the pressure on. In Friday practice of the penultimate race weekend at Hockenheim, the South Africaner topped the time sheets in a commanding way with a time of 1m 37.841s. While Maximilian Götz (GER) with the HRT Mercedes was another driver from the front-running quartet in the drivers’ standings ended up in third place, the other two title candidates, Liam Lawson (NZL) with the Red Bull Ferrari from the AF Corse team and Marco Wittmann (GER) with the Walkenhorst BMW found themselves at the other end of the timing sheets, Lawson in 18th place and Wittmann even 21st and therefore last. Tickets for the Hockenheimring Baden-Württemberg are still available for both race days from the DTM Ticket Shop (tickets.dtm.com) and the DTM Ticket Hotline (+49 1806 99 11 66). The races and the event programme promise excitement, action and good spirits. Both DTM races on Saturday and Sunday (start at 1.30pm on both days) are broadcast live on SAT.1 from 1pm and in over 60 countries.

First free practice of DTM at the Hockenheimring around lunch time on Friday ended with a 1-2 for Mercedes. Indian Arjun Maini (Team GetSpeed) was fastest with his time of 1m 38.356s from his fellow Mercedes-AMG driver Vincent Abril (MON, Team HRT). Next up were Nico Müller (SUI) with the Rosberg Audi, Assen race winner Lucas Auer (AUT) with the WINWARD Mercdes as well as the two ABT Audi drivers Mike Rockenfeller (GER) and guest starter Lucas di Grassi (BRA). In second free practice in the afternoon, Kelvin van der Linde posted the fastest time of the day in 1m 37.841s, over half a second faster than the three Mercedes drivers Daniel Juncadella (ESP, Team GruppeM), Götz and Abril.

“Being there up front again is absolutely mega,” a delighted Kelvin van der Linde said. “Saturday and Sunday is when it matters, but today’s practice already is a good basis.” Behind the fastest driver of the day, three Mercedes-AMG drivers followed with Götz, Maini and Abril, then Rocenfeller and Müller with Audi, Ellis and Auer with Mercedes and DTM newcomer Lucas di Grassi with the ABT Audi, rounding out the top ten. The eleventh-fastest time for Hubert Haupt (GER) with the HRT Mercedes in his second guest participation was also respectable.

From the press conference: Red Bull vodka a must-have, Juncadella as the preferred DJ and fears for Cordula Grün

With Liam Lawson, Marco Wittmann, Kelvin van der Linde and Maximilian Götz, the first four from the drivers’ standings featured in the traditional DTM Talk. “For me, it doesn’t change much whether I am leading or chasing,” points’ leader Liam Lawson said. “The fact that we are here as four drivers from four different brands shows how close and how equal it is,” Kelvin van der Linde pointed out. “Liam is a good example: prior to Red Bull Ring, he was over 50 points down, but now, after two strong weekends most recently, he is on top.” Maximilian Götz added: “I don’t mind being the hunter as long as I am in front at the end of the season. My last title win was in 2014, so it is about time for another one.” Wittmann had a strong points’ haul in the last two race weekends. “Now, we need to keep this momentum,” he commented.

All drivers are delighted about the return of the fans. “My fan club has been supporting me for 14 or 15 years, but the last two years, they could hardly go anywhere. Nice that they are now back again,” Götz said. Van der Linde commented: “Of course, South Africa is a bit far away, but I have seen some South African flags recently, that is great.” Lawson, meanwhile, was surprised that fans were even standing in front of the hotel to collect autographs: “Hockenheim always has the most passionate fans, that already was the case when I was racing in junior formulae.” For Marco Wittmann’s fans, there is a dedicated merchandise sales booth. “It is great that the people are so passionate. That also applies to my sponsor Schaeffler. After a bet about me being able to win the race at Zolder, two Schaeffler managers even got themselves a tattoo with my starting number 11.”

Although the battle for the title will most likely only be decided in the grand finale at the Norisring, the drivers also already had to answer the question how they would be celebrating afterwards. For Lawson and Wittmann, Red Bull vodka would be the preferred tipple while Götz would drink “anything alcoholic” as he admitted to “never drink all year otherwise”. The Franconian opted for Daniel Juncadella as the DJ while most of the drivers were looking forward to club music. “But my Schaeffler guys will probably be coming up with ‘Cordula Grün’, a German party song again. It is not my favourite song, but whatever,” Wittmann said. Van der Linde, on the other hand, announced a karaoke performance. All drivers agreed that, whatever the outcome, they wanted to celebrate together with the three others.

DTM Trophy points’ leader Ben Green got his weekend off to a good start by ending up as the fastest driver on Friday. His time of 1m 49.572s from first free practice remained unbeaten in the second session, so that the British driver with the FK Performance Motorsport BMW concluded the Friday as the fastest driver of the day. Next up were Belgian Nico Verdonck with the Ring-Racing Toyota, Assen race winner Reinhard Kofler (AUT) with the KTM run by the True Racing by Reiter Engineering team and Finn Matias Salonen with the Mercedes-AMG of the CV Performance Group team in second to fourth place, making it not only drivers from four countries, but also with four different brands in the first four places.