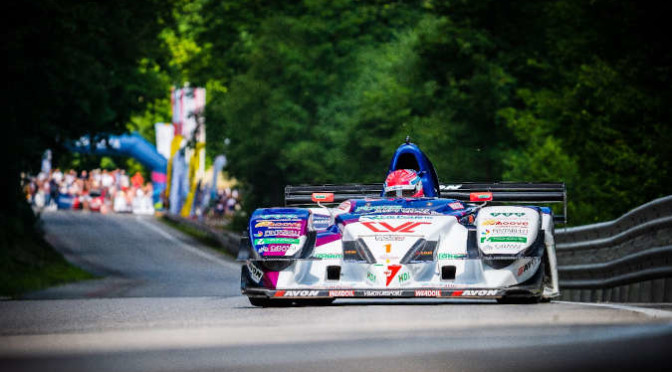 The “Masters” has never have lived up to its name so well: quantity and quality are on the agenda for the 4th edition of the FIA Hill Climb Masters, to be held on 9 and 10 October in Braga, Portugal.

The numbers speak for themselves: 158 registered drivers from 19 different countries, 15 teams in the Nations Cup, 27 cars (one in six) powered by a V8 engine, and tens of thousands of spectators expected. The 2021 edition of the FIA Hill Climb Masters has something to please everyone!

CATEGORY 2: FAGGIOLI AND MERLI SET FOR ANOTHER DUEL

Having dominated the European and Italian Championships for more than a decade, Simone Faggioli and Christian Merli are the firm favourites in Category 2 reserved for prototypes and single-seaters complying with FIA regulations.

However, there are plenty of other contenders for the podium positions in Portugal with Italians Domenico Cubeda and Diego Degasperi, Czech driver Petr Trnka and the French duo Sébastien Petit and Fabien Bourgeon the leading contenders. They all have in common the choice of a naturally aspirated 3-litre V8 engine, a safe bet that recent turbocharged (but restricted) engines are trying to challenge, thanks to Spaniard Joseba Iraola and the Italian junior Luigi Fazzino.

Category 2 shines for the variety of its cars, sometimes they are single-seaters of various origins (F.3000, F. Nippon, F3, F. Gloria, F. Renault), sometimes they are light and agile prototypes with motorbike engines, such as the BRC Suzuki turbo of the Spanish Champion Javier Villa, the Silver Car EF10 Suzuki turbo of the Andorrian Raul Ferre or the Osella PA21 JrB BMW of Luxembourg Champion Canio Marchione, of the Italian Samuele Mirko Cassibba and of Spain’s Cesar Rodriguez.

Category 4 is reserved for single-seaters and sports cars specific to certain national series, and therefore not eligible for the FIA European Championship. It could qualify for the ‘Unlimited’ designation, common in the USA and at Pikes Peak.

The British have very open technical regulations for hill climb. Their events are also very specific, short and on roads that are usually private and not much wider than the car tracks! Particularly sharp for these particular exercises, they are perhaps less so for events as they are run on the continent, but they have been a fixture of the FIA Masters since 2014.

The power-to-weight ratio of these cars are simply staggering, with over 650 HP, sometimes powered by methanol, with a weight tipping the scales at barely 420 kilos. No less than eight drivers from the 2021 British Top 10 will make the trip to Braga, with Wallace Menzies, Alex Summers, Sean Gould, Trevor Willis, Dave Uren, Paul Haimes, David Warburton and 2018 gold medalist Will Hall.

Compared to the British single-seaters of Gould, OMS, DJ or Force, the Nova NP01-2 sports car of three-time French Champion Geoffrey Schatz looks very conventional. However, it differs from the Category 2 cars due to its engine, a turbocharged Oreca derived from Rallycross, but unrestricted as authorised by the French regulations.

With an aero package similar to the European Championship’s Osella and Norma, but with significantly more power, Schatz will not only be the clear favourite in Category 4, but will also be a leading contender to claim the honorary absolute “FTD”, fastest time of the day.

Other typical French Championship cars will add to the exotic nature of Category 4, such as the Pipo-powered Osella PA30 of Cyrille Frantz or the 4-litre BMW V8-powered Norma M20 FC of Kevin Petit.

The Maltese are lining up with agile Radicals or Empire cars of lesser capacity.

Finally, the category will host a number of these small closed prototypes with screaming motorbike engines, known as “CMs”, so popular in Spain, France and Portugal.

CATEGORY 1: A BURST OF POWER

Sixty-five “closed” cars, both touring and GT, will compete in Category 1 and will be divided into Groups 1 to 5 according to a scale of values provided by the “Performance Factor”. This is an innovative method of classification: it consists of assigning a performance rating to cars based on physically measurable parameters such as weight, engine, chassis, transmission and aerodynamic appendages.

These characteristics are fed into an online computer (www.fiaperformancefactor.com) which assigns a ‘Pf’ value to each car. This value is then used to divide the vehicles into different groups, in steps of 40 Pf points, with Group 1 bringing together the most extreme preparations (Pf of 1 to 39).

One of the charms of Hill Climb is that it brings together cars from different backgrounds. In Braga, the palette will be very wide, between a good range of GTs, a flight of overpowered Mitsubishis and some eccentric creations that hill climb enthusiasts like to call “Bergmonsters”, such as the Alfa Romeo 4C Picchio of Italian Alessandro Gabrielli.

Mitsubishi Lancer cars were the kings of Group N in rallying and for Hill Climb have passed through the hands of various wizards who have transformed them both aesthetically and mechanically. The Swiss Ronnie Bratschi and the Poles Michal Ratajczyk, Daniel Stawiarski, Szymon Lukaszczyk and ‘Dubai’ have models with stratospheric power.

CATEGORY 3: A BIT OF EVERYTHING

Rightly considered as a grassroots discipline, Hill Climb racing allows the practice of motor sport at low cost, while being formative and demanding in terms of concentration and driving. For beginners, or for those who want to have fun within their means, the discipline is inclusive. At these Masters, Category 3 is made up of small and medium-sized touring cars that compete in national championships. There will also be seven of the fourteen female drivers entered, and some of the best juniors under 25 years of age selected by the national federations.

After a first series of technical checks on Thursday 7 October in the afternoon, Friday 8 October will be dedicated to the continuation of scrutineering and will end with the parade of the drivers and nations in the centre of Braga.

Saturday 9 October will be entirely dedicated to testing, with three practice heats on the menu from 10am. The same number of heats, this time in racing mode, will be on the programme on Sunday 10 October from 9am.

For the individual driver classification, the best of the three race heats will decide the ranking and the award of gold, silver and bronze medals in each of the four categories. For the Nations Cup, on the other hand, the ranking will be established on the basis of the best regularity index of the drivers specifically designated by their federation for this competition.