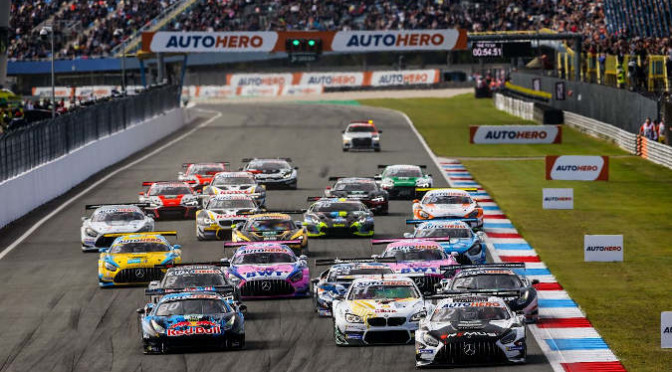 Who will become the 2021 DTM champion? This question is in the centre of the attention when DTM is racing at the Hockenheimring Baden-Württemberg this weekend (1-3 October). At Assen a fortnight ago, there were still six drivers who were among the favourites, but prior to Hockenheim, there are only four: Liam Lawson, Marco Wittmann, Kelvin van der Linde and Maximilian Götz. The spectators, who are admitted again at Hockenheim as well and who have access to the paddock including pit walk, Fan Village, infield grandstand and VIP Power Lounge, can look forward to an open battle. Competition in DTM is more intense than it had been for a long time. The battle for the title is a hot one, but Hockenheim will only bring a preliminary decision, if at all. The grand DTM finale is following only one week later at the street circuit in Nuremberg, the long-standing Norisring.

During the most recent event in The Netherlands, the youngest driver in DTM, Liam Lawson, only 19, replaced Kelvin van der Linde in the lead of the points’ standings. Since the opening round at Monza, the South African driver of the ABT Sportsline (Audi) team from Kempten had been at the top of the points’ table. Now, however, it is Lawson who has the highest number of points to his name, 175 of them. When the New Zealander with the Red Bull Ferrari, run by the Italian AF Corse team, still has the most points on Sunday afternoon at Norisring, he will be the youngest champion in DTM history, dating back to 1984. Especially Marco Wittmann, who is only ten points down (165), would like to prevent him from doing so. He already was the DTM champion twice and would love to add a third title. The BMW driver from the Walkenhorst Motorsport team, based in Melle in the north of Germany, is scoring with consistency, being the only driver to have collected points in all twelve races held so far. Wittmann has racked up two wins, at Zolder and at Assen, while Lawson and van der Linde have three wins each. Kelvin van der Linde currently has 160 points, Maximilian Götz from the Mercedes-AMG Team HRT 155. As a result, the title quartet is separated by only 20 points, with 112 points still at stake. Mathematically, Swiss Philip Ellis (Mercedes-AMG Team WINWARD, 109), Thai Alex Albon (AlphaTauri AF Corse, 104) and Assen race winner Lucas Auer (AUT, Mercedes-AMG Team WINWARD, 96), fifth to seventh in the championship standings, are also still in with a shot at the title. And everything is possible in a championship that is as balanced as the 2021 DTM.

DTM races as a farewell gift: Di Grassi’s Audi in the colours of his title-winning Formula E car

At the 4.574 kilometres long Hockenheim Grand Prix circuit, 21 GT race cars will be providing plenty of action. Only the first two race weekends at Monza and Lausitzring had less than 20 cars on the grid. At the Hockenheimring Baden-Württember, Munich-based Hubert Haupt, who already raced in DTM in 1991/1992 and 2001, will be participating as a guest driver for the second time this year. Haupt will be racing the third Mercedes-AMG from his own team HRT, based at the Nürburgring. The story behind Lucas di Grassi’s DTM début, meanwhile, is an extraordinary one. For the Audi works driver in Formula E, the participations as a guest driver at Hockenheim and Norisring are a farewell gift from ABT Sportsline as the Brazilian is moving to Susie Wolff’s Venturi team following Audi’s withdrawal from Formula E. With the colourful Audi R8 LMS in the livery of his Formula E race car from his title-winning season 2016/2017, di Grassi will be more than just an eye-catcher in the field of the world-class drivers.

DTM has been racing at Hockenheim since 1984, 97 DTM races were held at the Motodrom so far, nearly always including the finale. Initially, the plan was for this tradition to be kept for this year as well. However, as the Norisring round couldn’t be held in the summer as planned due to the Covid pandemic, the 2.3 kilometres long street circuit around the stone grandstand with its long history will now be serving as the venue for the deciding finale only one week later (8-10 October).

Like at Red Bull Ring and Assen already, fans will be able to fully enjoy DTM at Hockenheim and Norisring as well. The captivating atmosphere especially during the starting grid procedure at Assen fascinated everyone. At Hockenheim, the areas that are open for spectators also include the infield grandstand at the entry into the Motodrom with seats that allow for a stadium-like all-around view. The paddock will be open again as well this weekend with two DTM races and many support races, including the popular pit walk and the opportunity to obtain the coveted autographs and photos. The VIP Power Lounge with stage talks presented by popular host Kai Ebel as well as a wide range of activities will be in place at Hockenheim as well. Both at Hockenheim and in Nuremberg, the Fan Village will cater for a special DTM experience with plenty of action and entertainment.

DTM as the top event, the junior race series DTM Trophy with production-based GT sports cars, DTM Classic with the Touring car Legends from the 1980s and 1990s as well as the Porsche Carrera Cup Benelux will be providing a lot of action at the Grand Prix track all day long. Tickets can be ordered online until the race day from the DTM Ticket Shop (tickets.dtm.com) and the DTM Ticket Hotline (+49 1806 991166). As usual, the DTM races on Saturday and Sunday, with start at 1.30pm on both days, will be broadcast live on SAT.1 from 1pm and in over 60 countries.

“Assen was great. Especially the team has done a great job in preparing the car in such a perfect way again after the damage on Saturday.”

“Hockenheim is a great circuit, one of my favourites. Racing there is very demanding, especially the hard braking.”

“I don’t feel any pressure, I will be doing my utmost and I have my eyes set on a podium finish.”

“I assume that Liam (Lawson) and Marco (Wittmann) will be deciding the battle for the title between them.”

“It is a tough season for me. Unfortunately, we often didn’t have the pace that was needed. I have had years like this that weren’t so great over and over in my career. 2019 was a difficult year for me, too, but in 2020, I ended up as the best-placed BMW driver. So let’s see what 2022 has in store. For now, however, I will try to achieve a good single-race result at Hockenheim.”

“Kelvin (van der Linde) was a bit unlucky recently. Now, it is about whose car is working best at the tracks that are upcoming. Liam (Lawson) is strong everywhere. I wish for Marco to secure the title in the end.”

“I have had several tests with DTM cars in the past, together with Nico (Müller), and in my last GT race at Macau, I finished on top, but not on top of the result sheets. Macau was a disaster, so I still have unfinished business in a GT car.”

“I am really happy about this farewell present. When ABT team principal Thomas Biermaier first told me about this idea in Berlin, I thought that he was joking. But then this crazy idea became reality more and more. The ABT team and I have a very good connection and I am very happy to be allowed to race with ABT in DTM.”

“The last time I raced at Hockenheim was in the Audi Sport TT Cup Legends’ race. During the test I did last week, every lap was valuable to get to know the track and the car. But it wasn’t enough because I rate the quality of the drivers in DTM as very strong. Therefore, it is extremely difficult to jump in just like that. I will be trying to do my best and to enjoy the races.”

“I started the season with a new car and with a new team. That needed some getting used to at first. Monza was good, then we were struggling a bit, then we worked our way back up and getting closer to the front again. My aim is to end the season on a high and a race win is my goal.”

“Yes, Hockenheim is a home race, for my Team Rosberg in particular, but also for myself. I am most happy about the fact that everything is open again for the fans. Many friends of mine will be coming over, too. And I am certain that we will get to see good racing.”

„Hockenheim and Norisring should suit Audi, so chances for Kelvin (van der Linde) are good. Liam (Lawson) and Marco (Wittmann) are strong at all tracks, too. But I hope that Kelvin will become champion.”

“Good teamwork, consistency and a car to finish races, that are the key factors. On top of that, there is Marco (Wittmann), who is able to get everything out of the car while not getting any penalties in the process. We really are very happy, everything has been working out really well so far. Of course, we have a lot of experience with the BMW M6, but it took us a while to change from endurance race mode to sprint race mode, which was new for us.”

“The double-header with Hockenheim and Norisring within one week is the biggest challenge of the year for us as a team. We don’t have the time to return to our workshop in Melle, we will be preparing our DTM and DTM Trophy cars in a nearby BMW workshop, an opportunity that we are really grateful for. Of course, we hope that we only need a normal service and that there is no major damage.”

“We will continue to work like we have done so far, we want to use our momentum and make the best out of the battle for the title. We will take it as it comes, we don’t feel any special pressure.”

“I learned in DTM Trophy last year how to score points on a regular basis. Now, I have racked up three race wins and have scored points in every race. I hope this will pay off in the end.”

“I already attended a Formula 1 race at Hockenheim many years ago, when I was 12 or 13 years old. Back then, I already liked this stadium-like atmosphere a lot.”

“In DTM, the battle for the title is as close as in DTM Trophy. Liam (Lawson) and I are good friends, I hope he will win the title.”

“William (Tregurtha) and I have a lot of respect for each other. That is important and good for the sport.”