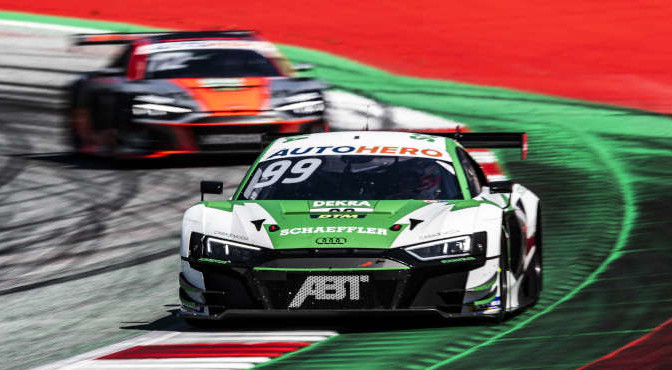 First Hockenheim, then Norisring: Two weekends in a row will decide who wins the 2021 DTM. Right in the middle of the title fight: Team ABT Sportsline with spearhead Kelvin van der Linde, who is third in the standings and 15 points behind leader Liam Lawson in the Ferrari before the last four races. 112 points will still be awarded on the last two race weekends of the exciting 2021 DTM season.

The big showdown starts this weekend with two races at the Hockenheimring (Saturday and Sunday both from 1 PM CET live on SAT.1 and on ran.de). ABT Sportsline is fielding an additional ABT Audi R8 LMS for Brazilian Formula E star Lucas di Grassi. This means that the team from Kempten will be competing with four cars in the DTM again for the first time since the 2016 season finale at the Hockenheimring.

For the ABT team it is unusual that the season does not end at Hockenheim. Team ABT Sportsline has been active in the DTM for 22 years. Only once did the big showdown not take place at the Hockenheimring: in 2010, the title was decided far away in Shanghai in China.

This year it is due to the COVID-19 pandemic: the city street race at the Norisring in Nuremberg could not take place in the summer and was moved to the end of the season making it effectively a two-part finale on two consecutive weekends.

For ABT Sportsline and Kelvin van der Linde, the aim at Hockenheim is to keep the championship open and to take the title decision to the Norisring. The experience from 22 years in the DTM and many successes at the Hockenheimring should help.

At no other race track has ABT Sportsline completed more DTM races and celebrated more successes than at Hockenheim. The team has contested 52 DTM races there so far, won twelve times, brought home 44 trophies for podium finishes and won the DTM in the final race three times: in 2007 with Mattias Ekström, in 2008 and 2009 with Timo Scheider.

The most successful ABT driver at the Hockenheimring is Mattias Ekström with four wins. Nico Müller and Edoardo Mortara each won twice, Laurent Aiello, Tom Kristensen, Miguel Molina and today’s SAT.1 expert Timo Scheider each won once.

ABT Sportsline’s success story in the DTM also began at the Hockenheimring: on 28 May 2000, three yellow Abt Audi TT-R cars were lining up at the very back of the grid. The small private team was still being ridiculed at the time. But the competition soon stopped laughing: in 2001, ABT Sportsline took its first two victories in the DTM with the compact coupé, and in 2002 it sensationally clinched the title. Two decades later, ABT Sportsline is by far the most successful of all active DTM teams with 70 victories.

Back to the Hockenheimring, the scene of many exciting and nerve-wracking title deciders in the DTM. In 2007, Mattias Ekström won his second DTM title there and first had to sit down on the floor during his first TV interview – the title fight had exhausted him so much mentally. In 2008 and 2009, Timo Scheider proved to have nerves of steel and brought the drivers’ title to Kempten in the big showdown.

The fact that it was the last drivers’ title for ABT Sportsline in the DTM so far hurts the team a lot, because the team from the Allgäu region has had the chance to win the championship in Hockenheim again and again since then: in 2016 with Edoardo Mortara, in 2017 with Mattias Ekström, in 2020 with Nico Müller. In 2016, four points were missing at the end, in 2017 even only three.

The 2005 final in Kempten is also unforgettable, when Mattias Ekström only had an outside chance of winning the title. A strategy by the team that was as surprising as it was clever almost enabled the Swede to successfully defend his title: starting from 15th place, Ekström completed the two mandatory tyre changes at the time in only one pit stop – a first in DTM history due to a loophole in the regulations that was subsequently closed. Currently, only one tyre change per race is mandatory.

The ABT Sportsline team celebrated its greatest success at Hockenheim in 2008, when Mattias Ekström, Timo Scheider and Tom Kristensen scored a 1-2-3 at the season opener.

René Rast’s success story in the DTM is also linked to the team from the Allgäu and the Hockenheimring: In the 2016 finale, the future three-time champion scored his first points in the DTM as a substitute driver for Mattias Ekström.

And there were also moments of shock: In the 2001 finale, Laurent Aiello rolled in the gravel bed entering the Motodrom – fortunately, the Frenchman remained uninjured. Worse was the accident Tom Kristensen had at the 2007 season opener shortly after the start. The Dane ended up in hospital and could only return to the cockpit after a break of several months.

Quotes before the DTM races at Hockenheim

Thomas Biermaier (Team Principal Team ABT Sportsline): “There have never been two race weekends in a row at the end of the DTM season. That is an enormous strain for everyone involved. But that’s racing as we loved it as a team. Fortunately, we have a strong team that can handle pressure. Even though we are more in the role of the underdog after the last few races, our big goal remains the same: we want to win the championship. We have already experienced many great moments as a team in Hockenheim. Even though it’s not the final this time, both races are extremely important for us. We have tested and prepared the cars perfectly. We are happy that Lucas is joining the team. I’m curious to see how quickly he gets to grips with the car, which is unfamiliar to him. It would also be important that Mike can support Kelvin in the title fight. Hockenheim is a track that always offers good racing. As a fan, I would definitely buy a ticket or tune in to SAT.1 on Saturday and Sunday. I expect two hot races.”

Kelvin van der Linde (ABT Audi R8 LMS #3): “Hockenheim is a highlight on the schedule. It was almost always the finale of the DTM and also in GT Masters. I have many good memories of Hockenheim and hope that we will see a lot of cool action in 2021 as well. It will definitely be an exciting, stressful weekend where you need strong nerves in the title fight. I think we are well positioned and prepared at ABT Sportsline. We’ll give it everything we’ve got so that hopefully it will be a podium in both races.”

Mike Rockenfeller (ABT Audi R8 LMS #9): “Of course I hope for a good weekend at Hockenheim. I hope that we are well sorted out, that my car works and that we are fast from the start. My goal is to fight for victory at Hockenheim on Saturday and Sunday. Hockenheim is a track I know very well. It’s where my DTM career started 15 years ago. I’m looking forward to driving the GT car there.”

Lucas di Grassi (ABT Audi R8 LMS #37): “I always wanted to do the DTM. ABT Sportsline and our Formula E partners are giving me this opportunity. I am very happy about it. The car looks great. We will also offset all the CO2 emissions in the races with my partner from Brazil. This means, with my DTM races I’m not only having fun, I’m also helping to save part of the rainforest in the Amazon. Of course, I have a lot to learn: ABS, traction control, shifting – these are all things I’m not used to anymore.”

Sophia Flörsch (ABT Audi R8 LMS #99): “It’s already the penultimate race weekend – it’s a real shame how quickly the season has passed. I will try to score one or two more points, like at Assen. I was extremely happy for the team. I hope that happens again this year. I’m looking forward to Hockenheim. I’ve raced there in Formula 4 before and I love the track. I’m definitely looking forward to seeing what happens at the last two weeks of the DTM – it’s going to be very stressful, but definitely very exciting.”

… Kelvin van der Linde, Mike Rockenfeller and Lucas di Grassi tested for a day at Hockenheim to prepare for the weekend?

… the two race cars of Kelvin van der Linde and Mike Rockenfeller were used for the test?

… ABT Sportsline was able to win Ravenol as another partner for Lucas di Grassi’s entry at Hockenheim and at the Norisring?

… ABT Sportsline borrowed an Audi R8 LMS from Riga Mainz for Lucas di Grassi’s entry and the car was prepared for the Hockenheim and Norisring events in Kempten in the last few days?

… an important tennis tournament is taking place in Kempten on the Wednesday after Hockenheim? ABT CEO Thomas Biermaier, Mike Rockenfeller’s race engineer Michael Petit, Kelvin van der Linde and his brother Sheldon will be on the court.

… Sophia Flörsch was on duty for TikTok at the Fashion Week in Milan between Assen and Hockenheim?