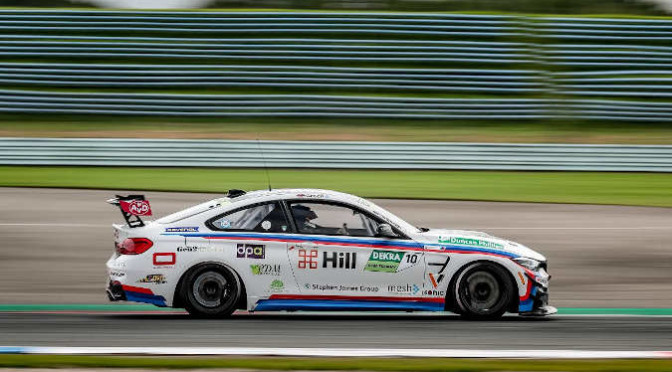 Most probably, a British driver will secure this year’s DTM Trophy title. But which British driver? Ben Green or William Tregurta? After ten races, only eight points are separating the two prior to the double-header at Hockenheim and Norisring. Or, to put it otherwise: 171 to 163, the respective points’ tally for Green and Tregurtha. But they are not just two Brits who are racing each other in the high-class junior race series with production-based GT sports cars. They are two Brits who are friends in real life.

Often, Ben Green, coming from Waltham Abbey in Essex, and William Tregurtha, living in Bedford, are even travelling together to the DTM Trophy events. “Not always, but whenever it makes sense,” says Green, who is racing a BMW run by the FK Performance Motorsport team. “We are travelling together when it is cheaper or easier, simply when it works out,” says Tregurtha, who is racing for points with a Mercedes-AMG for the new CV Performance Group team. The two know each other pretty well. Back in 2015, they were already racing in the same series, the British Ginetta Junior Championship. “Back then, we were even exchanging data,” Tregurtha recalls. And then, they went on to live together in an apartment. “At the time, we rented a large apartment for six drivers, Will and myself included, as we all were following the programme of the British motorsport academy,” says Green, 23 years old and therefore two years older than his rival. Since those early days, the two haven’t been racing against each other anymore, prior to this season in DTM Trophy. But they never really lost sight of each other.

Ben Green already raced in the inaugural DTM Trophy season 2020. He won the second race of the new series at Spa-Francorchamps, added another four podium results and concluded the season fourth in the standings. Moreover, he won the Junior Trophy and was allowed to do a test with an Audi R8 LMS GT3 at Barcelona as a reward. “I was able to drive for almost two hours, around 50 laps in total,” Green says. “That was a great opportunity that I really enjoyed.”

Green and Tregurtha going through the season almost in cadence

“The DTM Trophy is hard-fought and the battle for the title most likely will remain open until the end,” Green is expecting the decision only to come at Norisring, and then in the Sunday race rather than on Saturday. Both drivers, Green and Tregurtha, are marching through the season almost in cadence: they have secured two pole positions each, they both scored seven podium finishes from ten races. There is only a difference in the number of wins as, so far, Green has won three races and Tregurtha has secured two wins. The third-placed driver in the standings, Michael Schrey (GER), is already 59 points down with the Hofor Racing by Bonk Motorsport BMW, so currently, the trophy looks set to be going to the UK this year.

“For me, the title would be incredibly valuable,” says Green, “and I have the feeling that I have a good chance of making my dream come true.” Tregurtha, meanwhile, also feels an obligation towards the team: “For me, the title would mean the world, but also for my team that is putting so much confidence in me. This is not just about me, it is also about giving something back to the team because they were the ones who brought me here in the first place. I think that my chances are better than ever before.”

And then? The two are really keen on DTM. “Ever since I got started in motor racing, racing in DTM and at Le Mans has been my dream. I am working as hard as I can to make this happen,” Ben Green says. Tregurtha’s view is by no means different: “It would mean the world to me and every single day of hard work that I have been investing in this sport so far would be paying off.”

For the two, who are both quite active on Instagram (@BenGreen, @willtregurtha), crashing into each other is rather unlikely. “I can feel that there is a great mutual respect between the two of us,” Green emphasises and recalls the Lausitzring race: “There, we were racing side by side through multiple corners, Turn 1 included, and there was no contact.” For Tregurtha, there is no doubt either: “Surely, we are pushing each other hard, but nevertheless, one has to say that respect is key!”

The duel between Green and Tregurtha is in focus in the eleventh and twelfth race of the season at Hockenheim. And as usual in DTM Trophy, there will be quite intense battles for every other position in the field, too. SPORT1 and the streaming platform DTM Grid (grid.dtm.com) will be showing the races on Saturday and Sunday live. On both days, the start is at 3.10pm.