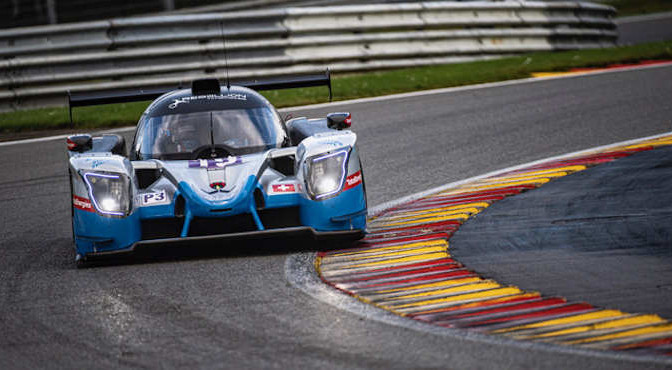 Niklas Krütten and the COOL Racing team claimed their fourth podium of the season and scored valuable points in the LMP3 class at the penultimate round of this season’s European Le Mans Series (ELMS) at Circuit de Spa-Francorchamps in Belgium. Having qualified 13th on Saturday, the Swiss team worked hard to optimise the set-up of the Ligier JS P320 by the start of the race on Sunday. And they did so with great success – the ADAC Stiftung Sport driver and his two team-mates, Matt Bell from Great Britain and Switzerland’s Nicolas Maulini, produced a fantastic fightback to finish a sensational second in race five of the season at the ‘Ardennes rollercoaster’. Niklas Krütten made the most of his home advantage: Krütten’s home in Trier is only about 100 kilometres from the legendary racetrack. Spectators were also permitted to watch an ELMS race at the circuit for the first time this season. The team leads the championship ahead of the season finale, which takes place from 22nd to 24th October at Autódromo Internacional do Algarve in Portimão, Portugal.

Swiss driver Nicolas Maulini was first behind the wheel in race five of the season, and gained several positions in the early stages of the race. The Bronze driver handed the car over to Niklas Krütten in fourth place on lap 43. The 18-year-old continued the fightback and was able to climb another two positions and put the team firmly on course for a podium. He handed over to Matt Bell on lap 73. The Brit successfully defended their position and crossed the finish line in second place at the end of the four-hour race. With two wins, two second places and a fourth, the team has been sitting pretty at the top of the LMP3 table since the start of the season. The gap to their closest rivals currently stands at five points.

Niklas Krütten: “The race went really well. We started from 13th, and Nicolas Maulini did a superb job in his double stint, during which he made up several positions. I rejoined the race in fourth place after the driver changeover and managed to climb another two places. The pace was great in my stint and the car felt good. I then handed over to Matt Bell, and he brought the car home in second place. We can be really happy with the result. The strategy worked superbly, the COOL Racing team prepared our Ligier perfectly. It was great to see spectators at my home race and to finish on the podium. We must get a little more out of the car for the finale in Portimão. It will not be easy, but we will give it our all.”