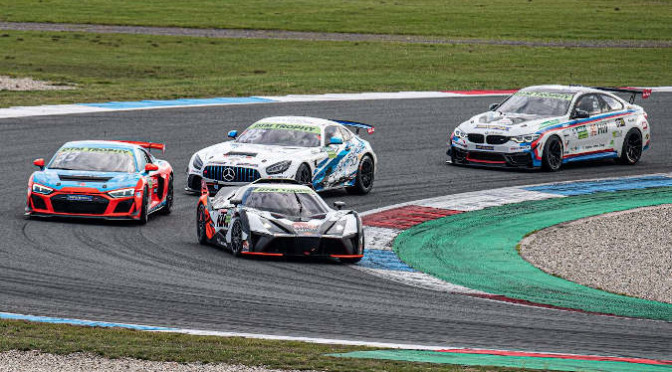 Austrians were dominating proceedings in Assen. After the victory by Mercedes driver Lucas Auer in the DTM race, his compatriot Reinhard Kofler wrote history in DTM Trophy. The Austrian, driving for the True Racing by Reiter Engineering team, secured the first-ever victory for KTM in the junior race series on the highly professional DTM platform. As a result, KTM becomes the fifth manufacturer to have its name added to the DTM Trophy winners’ list after BMW, Mercedes-AMG, Audi and Toyota.

Kofler was in command right away from the start. In the dash towards the first corner, he moved up from second on the grid, overtaking Swiss Lucas Mauron, who had qualified on pole position with the Heide-Motorsport Audi. Having won the start duel, the Austrian remained in control throughout. In commanding fashion, the KTM driver brought victory home and crossed the finish line after 18 laps with a margin of 2.118 seconds.

Mauron eventually finished in second place. For a large part of the race, he was in a battle with British Mercedes-AMG driver William Tregurtha (CV Performance Group), who joined in the post-race celebrations after coming home third. Tregurtha had started the race second in the drivers’ standings, 15 points down, and reduced the gap to his compatriot Ben Green by seven points.

Ben Green with setback in the battle for the title

With the FK Performance Motorsport BMW, Green was involved in an entertaining three-way battle for fourth place. The Brit had to defend his position over many laps against his fellow BMW driver Theo Oeverhaus (Walkenhorst Motorsport) and Kofler’s teammate Florian Janits.

On lap 14, the immense pressure on Green became too big. After a fascinating wheel-to-wheel duel lasting several corners, Oeverhaus went past. Janits used the opportunity and also moved up. As a result, the order behind the first three was settled as well: Oeverhaus brought fourth place home from Janits, Green and Belgian Toyota driver Nico Verdonck (Ring-Racing).

In the drivers’ standings, Green’s margin over Tregurtha amounts to exactly the eight points he scored for finishing sixth in the Sunday race. Between the two Brits, it is now 171 for Green and 163 for Tregurtha. Green’s fellow BMW driver Michael Schrey (Hofor Racing by Bonk Motorsport) remains third in the standings. On Sunday in Assen, he only scored two points for finishing ninth.

The 2021 DTM Trophy season is entering its final stage in a fortnight. Then, the penultimate race weekend of the year is on at the Hockenheimring, followed by the finale at Norisring only one week later.