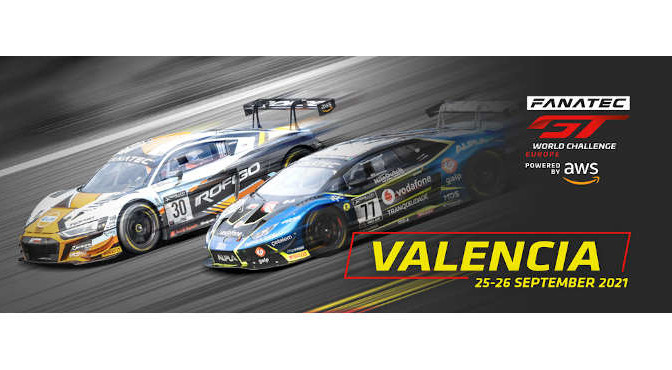 The 2021 Fanatec GT World Challenge Europe Powered by AWS Sprint Cup season will conclude next weekend at Circuit Ricardo Tormo Valencia (25-26 September) with titles up for grabs in the Pro-Am and Silver Cup classes.

The series makes its maiden trip to the Spanish venue four weeks after visiting Brands Hatch, where Audi squad Team WRT and its driver pairing of Dries Vanthoor and Charles Weerts sealed the overall Sprint Cup titles with a round to spare.

But there will be plenty at stake during the Valencia weekend. Teams’ and drivers’ championships will be decided in the Pro-Am and Silver Cup classes, while Weerts and Vanthoor can end the year in style by establishing a new record winning margin.

With an unfamiliar circuit adding to the challenge for both teams and drivers, the Sprint Cup finale promises plenty of close competition throughout the 27-car field.
Pro-Am and Silver Cup titles on the line

The battle for the Sprint Cup Pro-Am title is the closest heading into the decider. The teams’ and drivers’ standings are identical, meaning that one squad will be celebrating a championships double on Sunday evening.

A perfect weekend at Brands Hatch saw Miguel Ramos and Henrique Chaves open up a 14-point advantage at the top of the table. With five wins on the board this term, the #77 Barwell Motorsport Lamborghini drivers are the clear favourites to seal the championship.

Garage 59 duo Alexander West and Jonny Adam are next having taken one win and five additional podiums. Their record is strong, but the #188 Aston Martin crew must beat the rival Barwell squad in the opening race if they are to have a chance of snatching the crown.

The same is true for SPS Automotive Performance and its driver line-up of Valentin Pierburg and Dominik Baumann. With one win and six more podiums, the #20 Mercedes-AMG pairing heads to Valencia 15 points shy of Ramos and Chaves.

The #52 AF Corse Ferrari duo of Louis Machiels and Andrea Bertolini are an outside bet to lift the championship trophy. The experienced crew are 20.5 points adrift of the lead with a maximum of 35 on offer at Valencia, making it essential that they secure victory in the opening contest.

The battle for the Silver Cup is very nearly as close as the Pro-Am contest. Emil Frey Racing saw its lead trimmed last time out, though a subsequent Endurance Cup victory at the Nürburgring showed that the #14 Lamborghini remains as fast as ever. Alex Fontana has 91 points on the board and will be joined by Ricardo Feller as he seeks to take the title.

Team WRT duo Ryuichiro Tomita and Frank Bird are next with 73.5 points and have been the form team over the past two Sprint Cup events. The #31 Audi crew will hope to earn victory in race 1 and put pressure on Fontana ahead of the decider. Toksport WRT pairing Óscar Tunjo and Juuso Puhakka have 69.5 points and will need to take big points off the leader in the opening contest to ensure that they are in the hunt for the deciding run.

Feller has 63 points and is technically still in title contention, but could only take the crown if he raced separately from Fontana. Pierre-Alexandre Jean and Ulysse De Pauw (#107 CMR Bentley) are also mathematically eligible on 60.5 points but will require a perfect weekend, coupled with a disaster for Fontana, if they are to snatch the crown.

The teams’ championship tells a similar story, with Emil Frey Racing leading Team WRT by 22.5 points and Toksport WRT a further four in arrears. On Sunday afternoon one of this trio will be crowned class champion, while Emil Frey Racing could also secure the Fanatec GT World Challenge Europe Powered by AWS Silver Cup teams’ title.

Six more crews will compete for Silver honours at the finale. Emil Frey Racing’s effort will be bolstered by a second car thanks to the #114 Lamborghini, which will be shared by Konsta Lappalainen and Arthur Rougier. Mercedes-AMG squads AKKA ASP and Madpanda Motorsport are also regular front-runners and could play a role in the title battle.

Attempto Racing has looked increasingly strong at Endurance Cup rounds and will hope to land a first Sprint Cup podium of the season with its #99 Audi. Finally, Sky Tempesta Racing (#93 Ferrari) and Garage 59 (#159 Aston Martin) will both hope to end challenging campaigns on a high note at Valencia.
Battle for runner-up spot to be decided at Valencia

The pressure is off for Team WRT and its #32 Audi pairing of Dries Vanthoor and Charles Weerts after the overall Sprint Cup teams’ and drivers’ titles were secured at Brands Hatch. What’s more, the Belgian squad needs just eight points at Valencia to ensure that it sews up the Fanatec GT World Challenge Europe Powered by AWS teams’ crown before the Endurance Cup finale. This effort will be supported by the #30 Audi, which will see Benji Goethe sharing with a to-be-confirmed crew-mate

The battle to finish as runner-up in the overall Sprint Cup standings is led by a pair of Mercedes-AMG squads. Toksport WRT holds the advantage following an excellent Brands Hatch weekend for its #6 crew of Maro Engel and Luca Stolz, who captured their second win of 2021 in the closing race.

In contrast, AKKA ASP left the British venue bitterly disappointed after seeing two wins slip away from its #88 car and will be looking to end the year on a high with Raffaele Marciello and Timur Boguslavskiy. There was some comfort thanks to the sister #89 crew of Jules Gounon and Petru Umbrarescu, who earned a maiden podium in the second outing and will hope to carry this form into the finale.

JOTA came agonisingly close to victory at Brands Hatch before a late collision with the #88 Mercedes-AMG ended its charge. After showing such speed, Ollie Wilkinson and Ben Barnicoat will be more determined than ever to give the 720S GT3 its maiden Silver Cup podium. A first points-paying finish will be the aim for CMR duo Stéphane Richelmi and Nelson Panciatici, who have endured a very tough campaign in the #108 Bentley.

Porsche will be represented by two squads at Valencia. Allied Racing once again field Klaus Bachler and Julien Apothéloz in the #222, while Dinamic Motorsport returns to complete the season with Christian Engelhart and Adrien De Leener in its #54 machine. Emil Frey Racing should be a front-runner with the #163 Lamborghini of Norbert Siedler and Albert Costa, the latter ensuring a Spanish presence among the drivers.

A trio of Audi runners complete the Valencia grid. Saintéloc Racing has shown flashes of winning pace this term and will look for a strong conclusion with Christopher Haase and Léo Roussel in the #25 car, as well as the #26 duo of Fred Vervisch and Aurélien Panis. Finally, Attempto Racing will chase its first podium finish of 2021 with Mattia Drudi and Kikko Galbiati, the latter making his maiden appearance in the #66 Audi.
Campaign concludes with packed two-day event

Like the previous Sprint Cup outing at Brands Hatch, the Valencia event takes place over a packed two-day schedule. Free Practice (09:30 CEST), Pre-Qualifying (11:45) and Qualifying (15:30) all run on Saturday, while the season will conclude on Sunday with 60-minute races at 10:00 and 14:45.

Support action will come from the Formula Regional European Championship by Apline, which makes its third and final appearance this year alongside Fanatec GT World Challenge Europe Powered by AWS. The event will also feature a series of demonstrations from Volrace, a travelling track expo that will take spectacular drift cars on to the circuit.

With champions to be crowned and a new venue to discover, the Valencia weekend is set to bring the curtain down on the 2021 Sprint Cup season in style.