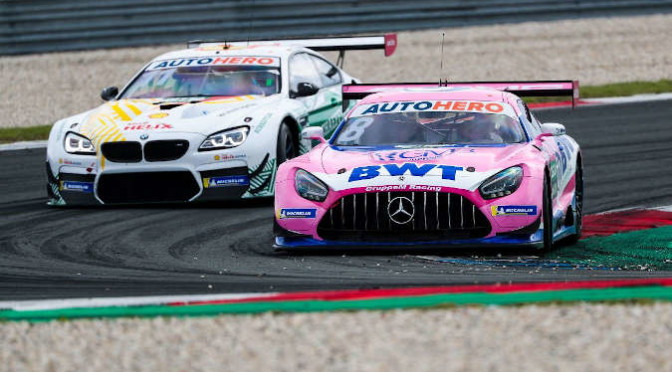 A promising start for points’ leader Kelvin van der Linde. On the first practice day of the DTM weekend at Assen in The Netherlands, only Daniel Juncadella was faster than the South African Audi driver from the ABT Sportsline team. With the Mercedes-AMG of the GruppeM team, the Spaniard ended up fastest of the day with a time of 1m 33.353s around the 4.555 kilometres long TT-Circuit. Van der Linde was only 0.160 seconds down. Third fastest was Philip Ellis (Switzerland) with the WINWARD Mercedes-AMG, currently fifth in the drivers’ standings. Assen is the sixth of eight rounds of the 2021 DTM. Tickets for both race days are still available from the DTM Ticket Shop (tickets.dtm.com) and the DTM Ticket Hotline (+49 1805 99 11 66). After Assen, there is only the double header with Hockenheim (1-3 October) and the finale at Norisring (8-10 October) within one week remaining. The two DTM races on Saturday and Sunday (start at 1.30pm on both days) will be broadcast live on SAT.1 from 1pm onwards and in over 60 countries.

In first free practice of the DTM, Swiss Philip Ellis topped the time sheets with a time of 1m 33.684s with the WINWARD Mercedes-AMG, followed by his compatriot Nico Müller with the Rosberg Audi, Red Bull Ring double race winner Liam Lawson (NZL) with the AF Corse Ferrari and Italian Mirko Bortolotti, who is making his DTM début as a guest driver with the T3 Motorsport Lamborghini this weekend.

In the second practice session in the afternoon, another Mercedes-AMG driver set the pace in Daniel Juncadella, whose time was also the fastest of the day. “A good practice day for us,” the Spaniard commented. “We had saved a set of tyres from the season opener at Monza for Assen because we hadn’t been able to test here. We used this chance, which was one of the reasons for the fastest time of the day. However, the car was very good, too. We have made good progress with the brakes. Recently, we were having many problems with the brake pads, but now, we have found a good solution. I think we are on a good way.”

In the addition of the two practice sessions, Kelvin van der Linde ended up second with the ABT Audi from Philip Ellis with his time from first practice. Next up were Nico Müller with the Rosberg Audi and a Mercedes trio with Lucas Auer (Team WINWARD), Arjun Maini (Team GetSpeed) and Maximilian Götz (Team HRT). Mirko Bortolotti (T3 Lamborghini), Vincent Abril (HRT Mercedes) and Liam Lawson (AF Corse Ferrari) rounded out the top ten.

From the press conference: drivers excited about TT-Circuit

With Liam Lawson and Maximilian Götz, the second- and third-placed of the current drivers’ standings participated in the Friday press conference. Sheldon van der Linde, who scored his maiden DTM race win at Assen last year, and Christian Klien, present as a guest driver for the third time this season, also answered questions from the media. Van der Linde and Götz already knew the track at Assen, but for Lawson and Klien, it was uncharted territory. They were all excited by the facility. “The track is fast and great to drive, it has a nice rhythm,” Götz said. Klien spoke about the ultra-fast pit lane entry: “After the race, we probably all need a set of fresh underwear,” the Austrian laughed. “The MotoGP riders really must have big balls, the way they are racing here!”

Götz and Lawson also spoke about the battle for the title and the pressure that comes with it. “With my two wins at the Red Bull Ring last time out, my chances are good again,” Lawson said. “This track should suit our Ferrari, too.” Götz said: “It is in our hands how much pressure we are letting get to us. The fact that my home round at Norisring is now the season finale is a good thing, of course.” Sheldon van der Linde admitted that he is no longer playing a role in the battle for the title, but that he is now keeping his fingers crossed for his brother Kelvin as the current points’ leader. “Last year, I won here in the rain, driving almost all the way up from the back of the grid to the front. Perhaps I should do a rain dance again!”

DTM Trophy: Tregurtha fastest of the day with Mercedes

In the DTM Trophy, the series for production-based GT sports cars on the DTM platform, Brit William Tregurtha was fastest of the day with the Mercedes-AMG of the CV Performance Group team. In second free practice, he posted a time of 1m 45.462s around the 4.555 kilometres long TT-Circuit Assen. Second fastest was Belgian Nico Verdonck with the Ring-Racing Toyota from Theo Oeverhaus with the Walkenhorst BMW and Lucas Mauron with the Heide-Motorsport Audi, making it four different brands in the first four positions once more.

In first practice, Austrian Florian Janits had topped the time sheets with the True Racing by Reiter Engineering KTM, ending up seventh in the addition of the two practice sessions. The fastest female driver in the field was Sandra van der Sloot from The Netherlands, who is a guest driver with the BMW of the Driverse Racing Team this weekend, in 14th place.