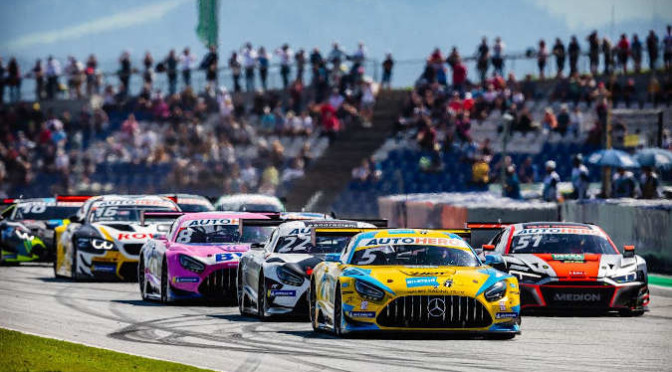 The battle for the title in the 2021 DTM is getting more and more intense. This weekend (17-19 September), Assen in The Netherlands is the venue for the sixth season round of the international race series. After that, there is the big showdown with the double-header at Hockenheim (1-3 October) and Norisring (8-10 October), hosting the finale for the first time. A sextet is dominating the battle for the precious DTM title. In Assen, it is still South African Kelvin van der Linde who continues to lead the drivers’ standings. However, things have become considerably closer, his margin in the hot battle for the title has been reduced significantly. The TT-Circuit Assen with its fast and medium-speed corners is putting the 21 world-class drivers, including the two guest drivers Mirko Bortolotti with Lamborghini and ex-Formula 1 driver Christian Klien with McLaren to a high-class test. In Assen, spectators are admitted again, too, both in the grandstands and in the paddock. Tickets can be ordered from the DTM Ticket Shop (tickets.dtm.com) and the DTM Ticket Hotline (+49 1806 99 11 66). The DTM races start on Saturday and Sunday at 1.30pm and are broadcast live on SAT.1 (from 1pm on both days) and in over 60 countries.

Kelvin van der Linde is coming to Assen with a total of 147 points he has collected with his Team ABT Sportsline Audi in the ten races held so far this season. With two victories and a total of 55 points at Red Bull Ring, Liam Lawson from the Red Bull AF Corse Ferrari team, only 19 years old, has come within just twelve points from van der Linde. After the Nürburgring round, where the New Zealander didn’t score any points, his title hopes already seemed to have been blown. Only four points down on Lawson, the best-placed German is third in the standings: Maximilian Götz for Mercedes-AMG Team HRT. Another ten points down, two-time DTM champion Marco Wittmann (GER) is fourth with the Walkenhorst BMW, followed by Swiss Philip Ellis (Mercedes-AMG Team WINWARD, 99) and Thai Alex Albon (Ferrari, AlphaTauri AF Corse, 94). At Red Bull Ring, this sextet more or less divided the points between them and scored 174 of the 188 possible points for the first six places in the two races at Styria. As a result, their gap to the following drivers increased.

All drivers already had the occasional non-score, with only one exception: Marco Wittmann. The singleton driver from the Walkenhorst Motorsport team from Melle near Osnabrück finished in the points in al the ten races so far, an impressive consistency. In the process, the best-placed driver from previous DTM years racked up one victory and a pair of pole positions. A performance that even surprised Wittmann himself as it is the final season for the BMW M6, after all. Its successor, the BMW M4, had a respectable competition début at the legendary Nordschleife of the Nürburgring last weekend and is also expected in DTM next year.

The TT-Circuit in Assen, the Hockenheim Grand Prix track and the ultra-short Nuremberg street circuit: the DTM drivers have to adapt themselves for three very different race tracks in the final part of the season. Assen is particularly challenging the drivers with the long Ramshoek corner. Apart from Turn 1 as a part of the tri-oval at DEKRA Lausitzring, Ramshoek is the fastest corner of the DTM season. Speeds of around 235 km/h are expected here, prior to the demanding change of direction for the subsequent chicane. And all that in front of the grandstand, the longest in Europe at 1.1 kilometre. Some DTM drivers have already raced in Assen, but for numerous competitors, Assen is uncharted territory. Marco Wittmann is among those who knows the track where the first DTM race was held in 2019. The winner of the inaugural race: Marco Wittmann.

Already for the third time this year, ex-Formula 1 driver Christian Klien is joining the DTM field with the JP Motorsport McLaren. During his most recent outing at Nürburgring, the Austrian’s performance clearly showed an upward trend. Lamborghini, meanwhile, is dispatching its works driver Mirko Bortolotti to Assen. The Italian is reinforcing the T3 Motorsport team and is to get a first impression of DTM. As a result, DTM is racing in The Netherlands with a field of 21 GT race cars.

Fans can look forward to a veritable firework of racing action in Assen. A total of seven race series is providing plenty of spectacle. Next to DTM as the top event, DTM Trophhy with production-based GT sports cars, DTM Classic Touring car Legends with DTM cars particularly from the 1990s and the BMW M2 Cup are present, joined by Porsche Carrera Cup Benelux, Mazda MX-5 Cup and Supercar Challenge. This means three days of pure motorsport action with DTM as the highlight.

“Making my début in DTM is really cool. I am very curious about Assen, I have never been at this track before.”

“I got a phone call from Lamborghini asking whether I wanted to race in DTM at Assen. I immediately said yes. Racing in DTM has always been my dream. I have been following DTM since I was five years old. I am looking forward to this new experience.”

“For me, it doesn’t make any difference whether I am racing as a permanent entrant or as a guest driver: I always try to achieve the maximum. That is also our goal in Assen. The T3 Motorsport team has shown that it is getting better race after race, they have good quality.”

“For me, DTM is a return to the roots. I have been racing GTs for seven years already, but prior to that, I raced in karts and single-seaters and there, it was just about me as well. Now, it is the same again in DTM. We can concentrate on the set-up for one driver. But there are some things to learn, too, like for instance the competitive pit stops.”

“I am quite happy with the way the season has been going. Of course, I could have done with a few more points, because there was this annoying retirement from the first race at Monza, for instance.”

“Consistency is incredibly important, especially when it is about the top positions in the championship. Now, there are three different tracks coming up, which is a good mix. I will be concentrating on myself and my own races.”

“In preparation for Assen, I have watched many videos and I have been driving in the simulator. It is about finding the rhythm for the track already. But preparation is the same for almost everybody, there is nothing magic about it.”

“It has been a tough year for me as the level in DTM is extremely high. But it is getting better and better.”

“Kelvin van der Linde is a very good GT3 driver. He is fast in every race. He is leaving nothing untested, but there is still a long way to go with different tracks until the battle for the title has been decided.”

“The track at Assen looks cool. I am also preparing with data and videos and I hope to be able to find my rhythm more quickly like that.”

“It is simply fascinating that spectators are admitted again, also into the paddock. Taking photos, making selfies, signing autographs, that is great.”

“At the beginning of the season, my expectations were pretty low. For me, GT3 was uncharted territory and the BMW M6 is in its final year. However, we have had several good weekends most recently and now, it is very nice where we are. I want to continue to score points on a consistent basis. I had three podium finishes in a row in the last races, I want to carry this momentum. Assen suits us.”

“Assen is a cool track, not a typical touring car/GT circuit. I won the first-ever DTM race in Assen, that was a highlight. I really like these fast and medium-speed corners a lot, they suit me. Especially the fast Ramshoek corner is really cool. I am curious how this corner will be with our cars.”

“DTM is different from the years before. But it is good racing with different brands and that is good for the fans. DTM with Gerhard Berger has done a good job, DTM is more interesting than it has been for a long time.”

“Having been away from racing for two years because of my study, I first had to find my way again. But that worked out pretty well and I quickly found back to my rhythm, even though I had to get used to a different car, my Toyota. So far, I am pretty happy.”

“Competition in DTM Trophy is very hard. The series is good for young and experienced drivers. There are many different brands, but we are getting further and further ahead with the development of our Toyota.”

“Racing on home soil and seeing fans from your own country in the grandstands and in the paddock is always nice. That doesn’t change anything on the track, though, I just want to be as competitive as I can there. And Ramshoek is something special, a really cool corner.”

“Yes, DTM is my goal, always has been. However, first of all, I am focussing on DTM Trophy, and then we will see.”