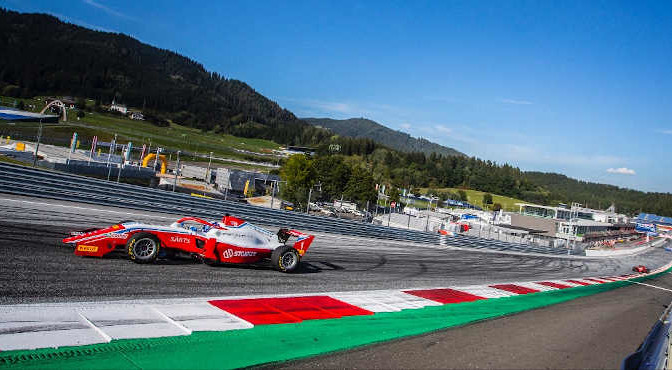 PREMA Powerteam made it back to the podium at Red Bull Ring in round 7 of the 2021 Formula Regional European Championship by Alpine.

Coming to the Austrian venue, the team was hoping for a break to end a challenging run of late, and that eventually came in race 1 with Paul Aron. The 17-year-old Estonian delivered an impressive qualy run to take P3 on the grid and then managed the same position throughout the day. For him, it was the fourth podium of the season. Aron is now tied for P5 in points.

Race 2 was way more difficult for Aron though. In qualifying 2, a track limits violation forced him to content with P17 on the grid. Then, a loss of tyre pressure before the start, plus the subsequent single tyre change ahead of race 2, eventually affected his run and pushed him down to P19.

Dino Beganovic ended his weekend on a high, crossing the finish line sixth in race 2, a brilliant rebound from P11 in qualifying due to traffic concerns. The Ferrari Driver Academy impressed with a flaming start after finishing race 1 in P14. After race 2, Beganovic was penalized 10 seconds for a safety-car infringement, but the full race 2 is still under investigation concerning track limits matters and the final results are still not out.

Also facing qualifying difficulties, Spaniard David Vidales produced good runs in both races, showing great race pace and craft. Coming from P13 in race 1, he secured a points finish in race 2 and laid down great foundations for the final part of the year.

#1
PAUL ARON
“We made a big improvement over the weekend, which was good as we have been working a lot on the car. On Saturday, we had a good qualy and managed to finish the race in P3. There was still some improvement needed, but it was really good to be back on the podium and get more points. Sadly today I lost my best lap due to a track limits violation so we had to start in P17. Unfortunately, I had a puncture before the race even started, and we had to change one tyre on the grid. We had only one lap to warm it up and afterwards it was really difficult to manage the race with a tyre that was much older. It was impossible to keep the same pace as the others.”

#12
DAVID VIDALES
“It hasn’t been an easy weekend again, especially in qualifying. We have to work on the single-lap performance that I haven’t managed to find here at Red Bull Ring compared to other races. Despite starting at the back, we always managed to recover a number of positions that almost nobody was able to get. On a really tough track for overtaking we constantly improved, and even in race 2, we got by three drivers. I’m satisfied with the race pace, but we have to improve qualifying to be able to start at the front.”

#17
DINO BEGANOVIC
“I would say that the potential was very strong this weekend, not the best Q1, but I tried to recover in the first race despite struggling a little bit with the pace. In Q2 I had a good feeling, and the car was extremely nice to drive. We were fighting for the top-5, but we caught traffic in the last three laps where I should have set my best time. In the end, we didn’t show what we had with P11 on the grid. In race 2, I did my best start ever and managed to recover to P6 with a strong run. It was a positive ending for a tough weekend, and I’m very pleased with that.”
Qualifying 1: P13
Qualifying 2: P11
Starting Grid Race 1: P13
Starting Grid Race 2: P11
Fastest lap: 1’25″917
Fastest lap: 1’26″231
Race 1: P14
Race 2: P6