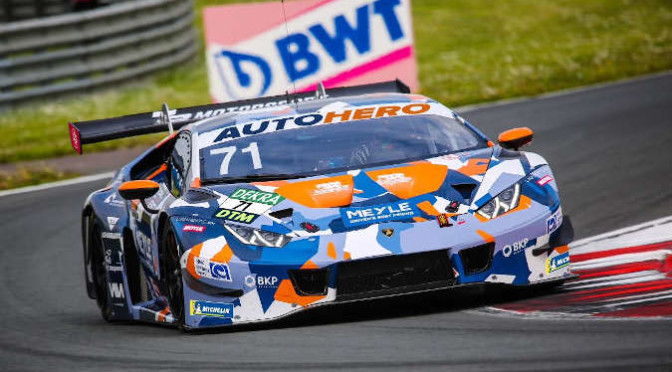 Lamborghini works driver Mirko Bortolotti will be making his DTM début in the sixth round of the season at Assen in The Netherlands from 17-19 September. The 31-year-old Italian will be racing a Lamborghini from the Dresden-based T3 Motorsport team as a guest driver. As a result, the DTM field at Assen will include 21 GT race cars, the second-largest of the season. Next to Bortolotti, ex-Formula 1 driver Christian Klien (AUT) will be participating as a guest driver with the McLaren for the third time.

“I am delighted to be making my début with T3 Motorsport at the next DTM race weekend. I would like to thank the team and Lamborghini for giving me this opportunity and their confidence in me,” says Mirko Bortolotti prior to his début. “I have been following DTM since I was a child. For me, this is a dream coming true, getting the opportunity to race there. Our ambition as a brand is to compete at the forefront in DTM.”

At the DTM organisation ITR, there is immense joy as well. “Mirko Bortolotti ranks among the fastest and most experienced GT drivers and is an undisputed world class drivers,” says Frederic Elsner, director event & operations, ITR. “We are really looking forward to his DTM début and we thank T3 Motorsport for its commitment to bring this top-notch driver into DTM.”

Based in Vienna, 31-year-old Bortolotti, who is fluent in German, won the 2017 title in the Blancpain GT Series, currently GT World Challenge Europe, and scored back-to-back GTD class wins in the Daytona 24-hour race in 2018 and 2019. Next to earlier achievements in single-seater racing including Formula 1 test drives, his track record also includes ADAC GT Masters race wins. As a works driver, Bortolotti has also been involved in the development of the Lamborghini Huracán GT3 Evo since 2015.

Most recently at the Red Bull Ring, T3 Motorsport already ran a third Lamborghini for 21-year-old Maximilian Paul from Dresden. Next to Bortolotti, the two regular drivers Esteban Muth (BEL) and Esmee Hawkey (GBR) will be racing for the Dresden-based team in Assen. At the Nürburgring, the only 19 years old Muth and 23-year-old Hawkey had scored their best results of the season to date with fifth and eleventh place respectively.

“We are really happy that Mirko Bortolotti will be driving for us in Assen,” says Jens Feucht, T3 Motorsport’s team principal. “With his many years of experience in the Huracán, he will certainly contribute to our team’s progress in the ongoing development work. Moreover, I am certain that our two regular drivers Esmee Hawkey and Esteban Muth can learn a lot from him as well and that we can take another step forward as a team.”

Assen’s TT-Circuit will be hosting the sixth DTM round prior to the decisive double-header with Hockenheim (1-3 October) and the finale at the Norisring (8-10 October). Tickets for Assen, featuring the longest connected grandstand in Europe with a length of 1.1 kilometres, are available online from the DTM Ticket Shop (tickets.dtm.com) and the DTM Ticket Hotline (+49 1806 99 11 66). Next to DTM as the top event, Assen has the largest support programme of the season with six further race series.