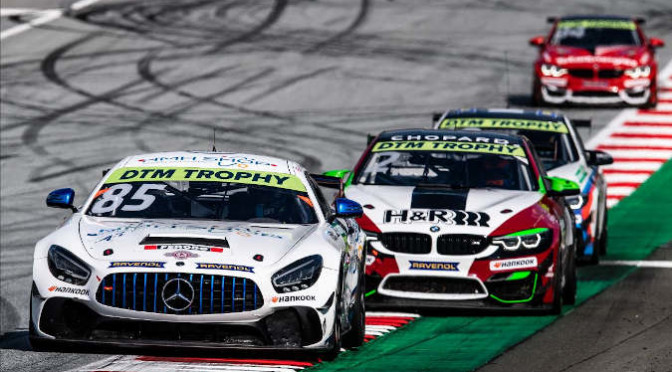 More and more, the battle for the 2021 DTM Trophy title is turning into a duel of two Brits: in the Sunday race at the Red Bull Ring in Spielberg, Austria, Mercedes-AMG driver William Tregurtha from the CV Performance Group team scored his second win of the season. As a result, Tregurtha reduced the margin of points’ leader Ben Green by another ten points. The BMW driver took the chequered flag in third place and is heading home from Austria with a ten points’ lead in the drivers’ standings. Second place in the race went to Michael Schrey (BMW, Hofor Racing by Bon Motorsport).

Tregurtha started the race on his own from the front row after the fastest driver from qualifying, Aston Martin driver Mike David Ortmann (PROsport Racing), didn’t participate in the race. Right at the beginning, Green’s fellow BMW driver Philipp Stahlschmidt (Hofor Racing by Bonk Motorsport) overtook Tregurtha, Green having moved up into the lead courtesy of a rocket start.

Stahlschmidt’s lead, however, didn’t last very long. On the third lap of what turned out to be a 20-lap race, Tregurtha put in the deciding overtaking move. A few corners later, Stahlschmidt’s teammate Michael Schrey went past and took second place. After that, Tregurtha and Schrey undisputedly drove first and second place home, separated by a solid six-second gap.

Stahlschmidt, on the other hand, saw rivals coming up from behind. In the first half of the race, he came under increasing pressure from Swiss  Yann Zimmer with the FK Performance Motorsport BMW and Ben Green. On the eleventh lap of the race, Stahlschmidt and Zimmer collided following an attempt to overtake. The suspension on the Swiss’s BMW broke so that Zimmer’s race ended prematurely.

Stahlschmidt still finished the race in fourth place behind Green and ahead of teammate Christopher Rink. The best-placed woman in the field, local hero Laura Kraihamer finished in eleventh place with the True Racing by Reiter Engineering KTM, scoring her first two points of the season.

The 2021 DTM Trophy season continues in a fortnight. Then, the fifth round is on at the TT Circuit in Assen in The Netherlands.