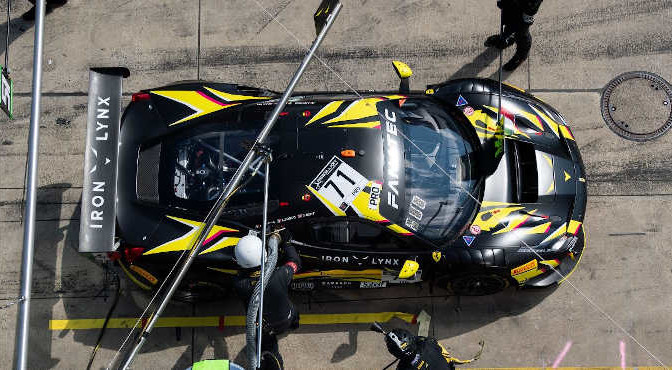 Italian racing team Iron Lynx arrived at the Nürburgring in Germany with two Ferrari 488 GT3 Evo 2020 cars this weekend to challenge once again for honours in the Fanatec GT World Challenge Europe Powered by AWS Endurance Cup.
The team carried the lead of the Endurance Cup Teams’ and Drivers’ standings with car #51 and the trio of Côme Ledogar, Alessandro Pier Guidi and Nicklas Nielsen after a sensational overall win, plus maximum points haul at the previous event, the TotalEnergies 24 Hours of Spa.

Also in the hunt for points were the drivers of car #71 – Antonio Fuoco, Callum Ilott and Alessio Rovera, the latter substituting for the recovering Davide Rigon.

The team worked on its race pace during Saturday’s testing and pre-qualifying sessions, taking eighth (#71) and ninth (#51) positions in Sunday morning’s aggregated qualifying session ahead of the three-hour race held in dry and bright conditions.

In the race, Callum Ilott (#71) and Nicklas Nielsen (#51) started and ran as high as fifth and fourth prior to the first stops, handing over to teammates Côme Ledogar and Alessio Rovera, who resumed in eighth and tenth, in a tight and tense battle with fellow championship competitor, the #32 WRT Audi.

Heading into the final stint of the race, the cars were handed to Alessandro Pier Guidi and Antonio Fuoco, who once again took up the fight with Spa 24h competitors WRT. Unfortunately, Fuoco was caught out by a patch of gravel on the track while challenging hard, and the car was obliged to retire, leaving Alessandro Pier Guidi to bring #51 home in seventh place, after a frantic dash to the flag due to a late safety car.

Iron Lynx retains the lead of both the Drivers’ and Teams’ Endurance Cup, heading into the final round at Barcelona next month.
Team Principal Giacomo Piccini commented: “We did everything we could to maximise our equipment this weekend, and our drivers all delivered strong and competitive stints to give us the very best chance and be the only Ferrari in the top twenty. However, we scored important points for the championship. Finally, I want to send congratulations to Prema who took two wins in Formula 3 at Zandvoort this weekend!”
Iron Lynx will take to the track once again next weekend with entries in Ferrari Challenge Europe at Spa-Francorchamps, while the team’s young guns will be back at the wheel of their Formula 4 cars as the Italian F4 Championship races at Spielberg, Austria.