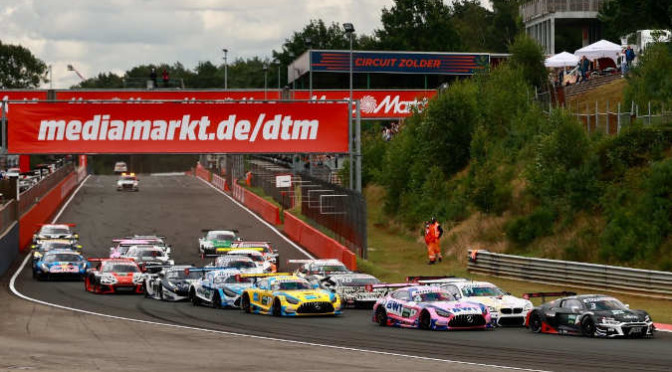 MediaMarkt and DTM are starting a joint motorsport support programme. In a comprehensive partnership, Germany’s and Europe’s number one electronics retailer is also becoming DTM Esports title partner and has been present with multi-faceted promotion, particularly during the prize-giving ceremonies, since the DTM season opener at Monza in Italy in June.

With this cooperation, initially planned for three seasons, MediaMarkt is expanding its involvement in the fast-growing esports segment. The company, together with its content portal gamez.de, has been positioning itself as an expert in the popular gaming segment for years already. “With this cooperation, we want to reach new target audiences and, together with DTM, further expand digital racing,” says Jörg Bauer, co-COO, MediaMarktSaturn Deutschland. “In the process, it is important for us to be involved as a content creator and to actively involve our customers, living up to our strapline ‘Here, it’s about me’.”

As a result, MediaMarkt will be prominently supporting DTM Esports as its title partner. Next to the DTM Esports Championship powered by MediaMarkt, initiated with great success in 2020 and to be established as one of the leading esports series in sim racing, the company, currently represented with 271 stores in Germany and all over Europe at over 850 locations in twelve countries, will also be launching its own sim racing series this autumn. Here, customers can participate both online through a dedicated MediaMarkt landing page and in selected stores in a genuine race seat.

The best participants will qualify for the DTM Esports Championship powered by MediaMarkt. Digital and real-world racing eventually lead to the  “DTM Youth Development Program”. After all, in the summer of 2022, the “best of the best” from DTM Esports will embark on a driver programme with fitness coaching, test sessions and eventually obtain a racing licence. Then, MediaMarkt and DTM together wil provide the absolute highlight: the best can look forward to the unique graduation from the virtual into the real-world cockpit and a full season in the 2023 DTM Trophy. The selected driver will participate in the races of the successful junior race series on the professional DTM platform with a production-based, over 500 hp strong GT sports car in distinctive MediaMarkt livery.

“We are really happy to have developed a novelty like the ‘DTM Youth Development Program’ within our own ranks and to have found the optimal partner in MediaMarkt to turn this project into reality and to establish it in racing. That is giving us the opportunity to identify young racing drivers and to support them accordingly,” says Benedikt Böhme, managing director of the DTM organisation ITR GmbH. “Examples like Moritz Löhner as the winner of the most recent DTM Esports Championship and sim racer Tim Heinemann as the champion of last season’s DTM Trophy already show that esports racers can be successful in DTM Trophy competition.”

For MediaMarkt, the focus is particularly on integration of customers. “The fact that newcomers are getting the chance to participate in the high-class DTM Esports Championship powered by MediaMarkt together with top-level sim racers is unparalleled so far. Therefore, we are happy to be able to provide this chance to our customers,” Jörg Bauer says.

With MediaMarkt branding: prize-giving ceremony as well as pit lane entry and exit

As a part of this partnership, MediaMarkt has been prominently visible since the start of the season in DTM, in which GT race cars from up to seven brands, from Audi, BMW and Mercedes-AMG as well as Ferrari, Lamborghini, McLaren and Porsche, are racing for the first time. Next to classic advertising boarding along the race tracks in five countries and during eight race weekends and further logo placements, the MediaMarkt gantries at the pit lane entry and exit are particularly eye-catching. Moreover, MediaMarkt is a partner of all the prize-giving ceremonies in DTM, DTM Trophy and the further support series.