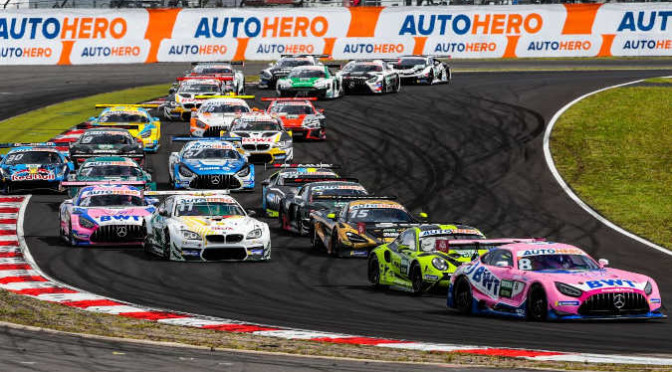 The DTM comeback at the Red Bull Ring will be a fan festival: not only that spectators will be admitted into the grandstands around the beautifully located race track in Styria, for the first time since the 2019 DTM season finale at Hockenheim, fans will even be allowed to get into the paddock again. “That will change the atmosphere completely,” 19-year-old New Zealander Liam Lawson (Ferrari) is looking forward to the close interaction with the fans, part of the DNA of the long-standing series. The Red Bull Junior driver, winner of the season opener at Monza, invariably ranks among the title candidates. The leader in the drivers’ standings, South African Kelvin van der Linde with the ABT Audi, is leading the high-class 20-strong field with race cars from up to seven manufacturers into the second half of the season.

Located not far from the city of Graz, the Red Bull Ring in Spielberg is one of the most popular race tracks. After Formula 1 and MotoGP, DTM is the third highlight this year in the Alpine republic where motorsport is very popular. The 4.326 kilometres long track, beautifully located in the rolling hills and with the most undulation of all the DTM tracks, stands out for fast and medium-fast corners. DTM is making its comeback in Styria after 2018, this weekend’s event includes the 16th and 17th DTM race at the Red Bull Ring since 2001.

As the local hero, Lucas Auer will be racing the Mercedes-AMG of the German-Texan WINWARD team. Currently, the 26-year-old Tyrolean is eighth in the drivers’ standings and wants to make up ground on home soil. Back in 2016, Auer became the first Austrian to win a DTM race. So far, the driver from Kufstein has five DTM race wins to his name. By the way, the first Austrian to score a DTM pole position, back in the 1980s, was ski racing ace Franz Klammer, who was also successful in motor racing.

Six different winners and a “high flyer”: battle for championship points heating up

The first eight of this season’s 16 races produced six different winners. That reflects a lot of excitement and the excellent balance in the 2021 DTM field, the first season with GT race cars from up to seven brands with Audi, BMW and Mercedes as well as Ferrari, Lamborghini, McLaren and Porsche. And it is a DTM rookie who is a regular podium finisher: Kelvin van der Linde had to wait long before making his DTM début when the ABT Sportsline team from Kempten finally got him on board for the season, his 22-year-old brother Sheldon having been racing in DTM for BMW since 2019 already. Since the season opener at Monza, however, 25-year-old Kelvin has been showing his potential.

With 129 points from three victories and as many pole positions, the smart South African and the “half-time champion” is also the current “high flyer” in an outstanding field of world-class drivers. With 96 points, 35-year-old German Maximilian Götz (Mercedes-AMG, Team HRT) is second in the standings from two-time DTM champion Marco Wittmann (BMW, Walkenhorst Motorsport) with 94 points, something nobody had expected prior to the season. Closely together, but still rivals on track, the teammates from the Ferrari AF Corse team, Red Bull Formula 1 driver Alex Albon (THA, 82) and Red Bull Junior driver Liam Lawson (NZL, 80) are fourth and fifth in the standings. Lawson not having scored any points at the Nürburgring last time out while Albon scored his maiden victory, the Thai is now keen to make use of his momentum, the title is by no means out of reach yet.

Be it van der Linde in the overall drivers’ standings, Lawson in the junior classification, ABT Sportsline in the teams’ championship or Mercedes-AMG in the manufacturers’ points, none of the leaders can rest on his laurels, because with this level of variety, all championship battles will probably only be decided during the season’s grand finale at the unique Norisring from 8-10 October.

Spectacular programme: from DTM via DRM Revival up to DTM Electric Power Runs

Like some other DTM drivers, Lawson and Albon tested at the Austrian circuit last week. The circuit layout seems to suit the Ferrari, just like the BMW, also powered by a turbocharged engine for which the altitude is a benefit. As a result, the three BMW drivers in the field, Wittmann and the two ROWE teammates Timo Glock and Sheldon van der Linde, also have hopes of being in contention for the top positions. But in DTM, things hardly ever come as expected…

In Austria, the field of the regular drivers is growing once again as the T3 Motorsport team from Dresden is running a third Lamborghini for 21-year-old youngster Maximilian Paul, also from Dresden, racing alongside the two Italian sports cars for 19-year-old Belgian Esteban Muth and Brit Esmee Hawkey, by three years his senior, who, with fifth and eleventh place last time out at Nürburgring, both scored their best season results to date.

The glorious race cars from the 1970s will also be attracting a lot of attention at the Red Bull Ring, be it the legendary Ford Capri Turbo, Porsche or BMW. A total of at least 20 race cars from the legendary Deutsche Rennsport Meisterschaft (DRM) will be gathering in Styria for a big revival. A special highlight: even ex-BMW Junior driver and Formula 1 driver Marc Surer will be racing a brawny Group 5 BMW.

The DTM races get underway on Saturday and Sunday at 1.30pm and will be broadcast live in over 60 countries, in Germany on SAT.1 (live from 1pm on both days). Anyone not wanting to miss the fan festival with DTM, DTM Trophy, DRM Revival and BMW M2 Cup as well as Power Runs by the future DTM Electric and the spectacular DTM Drift Show can order tickets, even on race day, from the DTM Ticket Shop (tickets.dtm.com) and the DTM Ticket Hotline (+49 1806 99 11 66). Moreover, there will be ticket sales booths at the track.

“I will not change my driving style. The incident with Markus Winkelhock at the Nürburgring was absolutely avoidable. I was on the inside and I guess I surprised him. Given the championship situation, I was very disappointed and there was a lively discussion with him afterwards.”

“All in all, I am very happy with the first half of the season, even though things didn’t go well for me at Zolder and especially at the Nürburgring. That wasn’t the maximum of what could have been. Therefore, the first half of the season wasn’t perfect, but it was okay. Everything is still possible, so therefore I am focussing on the weekend ahead.”

“The Red Bull Ring suits us, especially the fast corners, even though the straights are a bit too long for us. That isn’t our strength. However, generally, the lay-out is favourable for us and the test went well, too.”

“The first corner is very important as it is about carrying as much speed as possible for the long uphill part. T2 and T3 are good for overtaking. When the track goes downhill again, the car tends to understeer pretty quickly.”

“The fact that we will be having fans back in the paddock again will change the atmosphere completely. We are getting the chance to meet fans again, that’s great.”

“My goal for the weekend: I want to win races.”

“I have the feeling that we aren’t quite there where we ought to be. We are simply lacking that little bit of luck. I hope that we will have it soon, but whatever, we will continue to work hard to get there, to get further up to the front.”

“Red Bull Ring is my home track, from Spielberg, it is just around half an hour from the KTM factory in Graz where the X-Bow is being built. A few days ago, I was at the track for testing as well, albeit with the new GTX, which is an entirely different car from my X-Bow in DTM Trophy. But driving at this track is always cool, I have some very good memories of this track.”

“With my KTM, I have to carry a lot of momentum through T1 for the uphill part. It is really steep out there, something you only notice when you walk up there. T3 is very good for overtaking. At this track, it is never boring, a really cool circuit.”

“On one hand, DTM Trophy is a junior race series, but on the other hand, there is a very demanding mix with highly experienced drivers. From that perspective, the series is perfect to develop as a driver. You always want to get higher up and so do I, of course. DTM would be a really great goal indeed.”

“In the recent past, popularity of DTM in Austria has increased considerably. DTM has great drivers and a strong media presence. DTM is a real highlight in Austria.”

“We are very happy with the way in which DTM has developed so far. We have fantastic drivers and professional teams and on top of that a convivial atmosphere in the paddock otherwise just known from MotoGP or from America.”

“Initially, there was a lot of discussion about the balance of performance. All in all, we are happy with the BoP as well. That the BoP is working well was visible at the Nürburgring where 22 cars were within one second, sometimes even hundredths or thousandths of a second apart, and Porsche was able to run at the front at its first participation as well.”

“We presented DTM Electric during the season finale at Hockenheim in November last year and people were in awe. We have been working hard on this package ever since and have made important progress especially in areas like battery, electric engines and aerodynamics.”

“At the Red Bull Ring, we will be presenting DTM Electric again this weekend, and we want to show the next step during the DTM finale at the Norisring.”