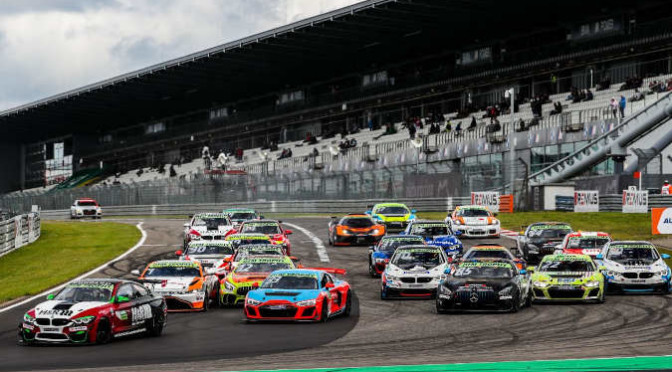 It is an open three-way battle between a German stalwart and two youngsters from England. At the 4.326 kilometres long Red Bull Ring (3-5 September) for the DTM Trophy’s first-ever visit to Styria, the favourites will be competing for further valuable championship points: the seventh race of the season on Saturday to conclude the first half of the DTM Trophy and the eighth race on Sunday to get the second half of the season underway. Going into the fourth race weekend of the junior race series on the DTM platform, William Tregurtha, Mercedes-AMG driver from the CV Performance Group team, is leading the standings with 110 points, followed by his former flatmate Ben Green in an FK Performance Motorsport BMW with 107 and another BMW driver, Michael Schrey from the Hofor Racing by Bonk Motorsport team with 88 points. On Saturday, 28 points are still up for grabs, with three for pole position and 25 for the race win, on the way to the unofficial half-time champion’s title.

Tregurtha, 21 years old and living in Bedford, has scored four podium finishes from six races held so far, secured one race won, two pole positions and only one non-score. His friend Green, his senior by two years and coming from Waltham Abbey, is the only driver in the hard-fought DTM Trophy to have won two races already this year, together with a pair of pole positions and, like Tregurtha, four podium finishes in total. Schrey was on the podium three times, won one race and secured one pole position. With four different winners from six races, the DTM Trophy is well-balanced. Nico Verdonck (BEL) also won a race with the Ring-Racing Toyota and is fourth in the standings with 65 points, followed by Swiss BMW driver Yann Zimmer (FK Performance, 50) and defending champion Tim Heinemann (PROsport Performance, 49) with Aston Martin.

“The DTM Trophy is really hard-fought, but I hadn’t expected it to be any different,” says Michael Schrey, who is in his first season in the series. However, the 38-year-old from Osnabrück ranks among the experienced drivers in the 21-strong field and already has numerous national and international achievements with production-based GT race cars to his name. “There are eight to ten drivers capable of winning races. I think that also shows that the balance of performance is quite adequate.” The two-time champion of the VLN endurance championship at the Nürburgring is coming from a motor racing dynasty and almost grew up in the paddock alongside his father Wolfgang. Michael Schrey is enjoying the DTM Trophy format: “Being responsible just for myself, racing in pure sprint races without any tactical obligations, that is the crucial difference compared to other series. As a result, the speed at the track is higher, too.”

His team principal Michael Bonk agrees: “To me, the DTM Trophy is really great. For us, it was clear at an early stage that we had to be part of it.” Hofor Racing by Bonk Motorsport is running three BMWs, for Schrey, Christopher Rink (GER) and Philipp Stahlschmidt (GER). “With our current third place, we are very happy. At the end of the season, we would like to be the best-placed BMW and preferably win the title, of course,” Bonk says. So far, Schrey is happy, too: “At this high-performance level, we can be happy.” The family father is expecting the three-way battle between himself, Tregurtha and Green to last until the end of the season. And there is no doubt in which place he would like to end up.

For the round at the Red Bull Ring, Michael Schrey is confident about his chances: “I know the track well, it should suit our BMW. Perhaps, our turbocharged engine is a slight advantage, especially at the start, but our tyre wear, on the other hand, is a disadvantage, unfortunately. Anyway, I am looking forward to this track with its great atmosphere, to a weekend with nice weather.”

Laura Kraihamer, one of three female drivers in the field, is optimistic going into her home round. Like Schrey, the 30-year-old from Austria (True Racing by Reiter Engineering) has already had quite some success in Styria. “I love the Red Bull Ring,” the KTM works driver says. She hopes that as many Austrians as possible will be rooting for her so that she can finally score her first points of the season. “To me, it is mega that the fans are admitted into the paddock again. The paddock was never really empty, of course, but the fans weren’t there and therefore, a certain atmosphere with passion and adrenalin was lacking.”

New in the field is Sebastian Kornely from Binningen, Germany, who will complete the remainder of the season with the #31 Heide Motorsport Audi. Moreover, Austrian Florian Janits will be racing for the second time after Lausitzring, replacing his compatriot Reinhard Kofler behind the wheel of the #23 True Racing by Reiter Engineering KTM due to the latter’s clashing commitments.

The two DTM Trophy races will get underway on Saturday and Sunday at 3.10pm and will be broadcast live on SPORT1+ and the DTM Grid streaming portal (grid.dtm.com)