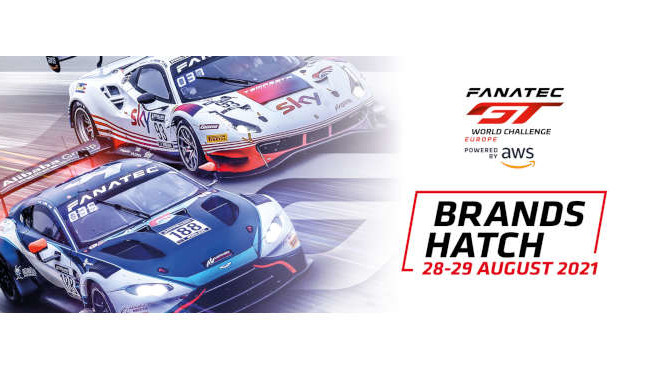 A 29-car field will herald the return of Fanatec GT World Challenge Europe Powered by AWS to Brands Hatch this weekend (28/29 August) for a pair of Sprint Cup races on the 3.9km Grand Prix circuit.

It has been more than two years since the series last visited the popular Kent venue after Covid-19 restrictions forced the cancellation of the 2020 round. As such the upcoming meeting is more keenly anticipated than ever, while another bumper grid should ensure a highly competitive contest.

Though this year’s event has been moved to a later date it still falls on a Bank Holiday weekend, presenting fans with the perfect opportunity to experience the thrill of GT3 racing in person. Single-day and weekend tickets are on sale now, while children under the age of 13 are admitted free when accompanied by a paying adult.

The Brands Hatch round comes four weeks after a memorable TotalEnergies 24 Hours of Spa and, as the penultimate stop on the Sprint Cup tour, represents a key moment in the 2021 championship battle. Indeed, it would be no surprise to see at least one title settled at the British circuit.
Team WRT seeking to complete Sprint Cup defence at Brands Hatch

The battle for the overall Sprint Cup championship is by no means over, but Dries Vanthoor and Charles Weerts (#32 Team WRT Audi) are certainly in a strong position to retain their crown following a double win last time out at Misano. With an advantage of 28.5 points over their closest rivals, the Belgians know that another successful weekend could be enough to complete the job with a round to spare.

The form book suggests that they will be among the front-runners: Team WRT has amassed five wins at Brands Hatch, including clean sweeps in 2015 and 2018. Its challenge will be bolstered by the #30 Audi of Benjamin Goethe and Kelvin van der Linde, who scored their maiden podium together last time out.

The biggest Pro entry comes from Saintéloc Racing. The French squad will field a three-car effort led by the #25 Audi of Christopher Haase and Leo Roussel, who earned the team its first podium of 2021 at Misano. Frédéric Vervisch and Aurélien Panis share the #26 machine, while the vastly experienced Markus Winkelhock partners Scottish racer Finlay Hutchison in the #27. Attempto Racing will add a sixth Audi to the Pro field, with Mattia Drudi returning in the #99 car alongside Sprint Cup newcomer Max Hofer.

Raffaele Marciello and Timur Boguslavskiy sit second in the championship heading to Brands Hatch and represent the most likely threat to Weerts and Vanthoor, though the #88 AKKA ASP Mercedes-AMG duo are still searching for their first win of the campaign. The sister #89 has struggled in comparison, leaving Jules Gounon and Petru Umbrarescu 20th in the standings ahead of the British event.

Since taking victory at the season-opening Magny-Cours weekend, Mercedes-AMG Team Toksport WRT has added just one more podium finish. The title now looks to be beyond the German squad’s grasp, but there is still time for Maro Engel and Luca Stolz to add more wins.

After a remarkable showing at Zandvoort the Emil Frey Racing squad struggled to maintain its form at Misano, but remains a potential front-runner with Albert Costa and Norbert Siedler sharing the #163 Lamborghini. JOTA scored an excellent seventh-place finish for McLaren at the TotalEnergies 24 Hours of Spa and will hope to earn a maiden Sprint Cup podium on home soil with Ben Barnicoat and Oliver Wilkinson.

CMR duo Stéphane Richelmi and Nelson Panciatici are still searching for a strong result in the #108 Bentley Continental, which is sure to have the backing of the local fans. Team Allied Racing completes the Pro contingent with its #222 Porsche, which made its Sprint Cup debut at Misano and retains an unchanged line-up of Klaus Bachler and Julien Apothéloz. The latter is the youngest driver on the grid and will hope to hone his skills against the best GT3 drivers in the business.
Pro-Am impossible to predict, Emil Frey Racing on course for Silver Cup glory

While the overall Sprint Cup title could be settled at Brands Hatch, the situation is very different in the Pro-Am class. Indeed, the gap between the championship-leading crew and fourth in the standings is just eight points, making this battle impossible to call.

Valentin Pierburg and Dominik Baumann (#20 SPS Automotive Performance Mercedes-AMG) top the table with 71.5 points and have shown impressive consistency throughout the campaign. In terms of raw pace, Barwell Motorsport duo Miguel Ramos and Henrique Chaves (#77 Lamborghini) have had the edge, though they travel to Brands Hatch three points shy of the leaders.

Alex West and Jonny Adam earned their maiden Sprint Cup win last time out at Misano by the smallest possible margin, crossing the line 0.001s ahead of the #20 Mercedes-AMG. They remain firmly in the title hunt with a 3.5-point deficit to Pierburg/Baumann, as do Louis Machiels and Andrea Bertolini (#52 AF Corse Ferrari). The experienced Ferrari drivers are just eight points off the top and always capable of fighting for victory.

The Pro-Am field will be bolstered by an additional crew at Brands Hatch, with RAM Racing set to field its #69 Mercedes-AMG on home soil. Driving duties will be shared by experienced Macanese racer Kevin Tse and the equally well-travelled Adam Christodoulou, the latter making his first Sprint Cup outing since 2018.

In contrast with the situation in Pro-Am, the Silver Cup title could be decided at Brands Hatch. Alex Fontana (#14 Emil Frey Racing Lamborghini) holds an advantage of 34.5 points over his closest championship contenders and will be seeking to finish the job alongside crewmate Ricardo Feller. The sister #114 Lamborghini will also compete for Silver Cup honours as Arthur Rougier steps in to replace Jack Aitken alongside regular pilot Konsta Lappalainen.

CMR is the main threat with its #107 Bentley, which has enjoyed a superb campaign in the hands of Pierre-Alexandre Jean and Ulysse de Pauw, while a maiden win last time out also gives Frank Bird and Ryuichiro Tomita (#31 Team WRT Audi) a shot at the title. Should the Emil Frey Racing effort falter, both of these crews will be ready to pounce.

Madpanda Motorsport will be hoping to maintain its recent form after taking a sensational class win at the TotalEnergies 24 Hours of Spa. Ezequiel Perez Companc and Rik Breukers remain at the controls for the trip to Brands Hatch. Fellow Mercedes-AMG squad Toksport WRT also enjoyed an excellent run at the Belgian endurance classic, taking second position at the finish, and will go after a first Sprint Cup win of 2021 with Óscar Tunjo and Juuso Puhakka.

Garage 59 completed the Silver Cup podium in the Ardennes. Tuomas Tujula and Nicolai Kjaergaard will hope to transfer this form to the team’s Sprint programme, which is yet to match the performance that the British squad achieved at Spa. The same could be said of Attempto Racing, which narrowly missed a podium finish at the 24 Hours and will look to remain at the front of the pack with Dennis Marschall and Alex Aka sharing its #66 Audi.

A third Mercedes-AMG comes from AKKA ASP with its #87 crew of Jim Pla and Konstantin Tereschenko. The pair have scored two class wins this term, though their title hopes have faded due to a lack of consistency. Still, another triumph at Brands Hatch would be no surprise.

Rinaldi Racing took its first Sprint Cup podium of the season last time out at Misano and will chase more success with Benjamín Hites and Patrick Kujala. In contrast, 2021 has been a tough season for fellow Ferrari squad Sky Tempesta Racing. Brands Hatch represents a home event for the team and driver Chris Froggatt, who will hope to secure a breakthrough result alongside Giorgio Roda.
Packed two-day event in prospect

The trip to Kent also brings one of the most diverse support packages of the season. This year it’s all about retro machinery, with several Classic Sports Car Club series set to roll back the years. What’s more, a supercar parade will take place on Sunday afternoon, treating fans to the sight of even more spectacular engineering.

With the championship battle reaching its climax and fans back at the circuit, it promises to be a Bank Holiday weekend to remember as Fanatec GT World Challenge Europe Powered by AWS returns to Brands Hatch.