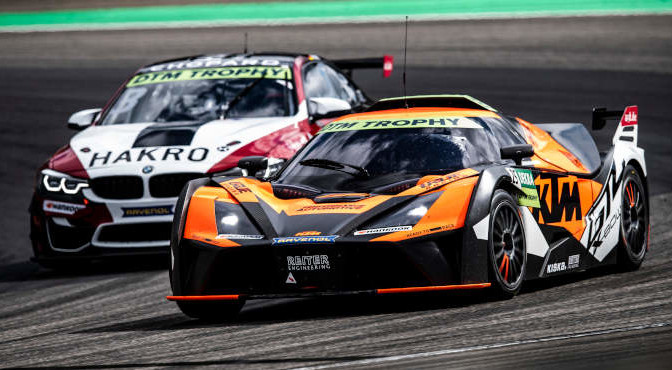 As a guest driver, Marcel Marchewicz (GER) has won the DTM Trophy race at the Nürburgring on Sunday. The driver of the Schnitzelalm Racing Mercedes-AMG benefited from a five-second time penalty for Lucas Mauron. The Swiss was first across the finish line with the Heide-Motorsport Audi, but dropped back to second behind Marchewicz as a result of the penalty. Belgian Nico Verdonck, third with the Ring-Racing Toyota, rounded out the podium. A time penalty of five second also demoted Michael Schrey with the Hofor Racing by Bonk Motorsport BMW. He was fourth on the road, but eventually ended up classified eighth. The best female driver in the field, Laura Kraihamer (AUT) finished 14th with the True Racing by Reiter Engineering KTM.

Schrey started from pole position and held on to the lead on the opening lap of the race. Then, coming from sixth on the grid, Mauron moved up into second place, followed by Tim Heinemann (GER) with the PROsport Racing Aston Martin, Marchewicz, William Tregurtha (GBR) with the CV Performance Group Mercedes-AMG, and Verdonck.

High-class duels marked the first part of the race in the junior race series for production-based GT sports cars. There were multiple lead changes between Schrey and Mauron before the Swiss finally came to the fore on lap six. After that, Mauron was in control, extending his lead lap after lap. Eventually, he crossed the finish line in first place with a margin of 4.6 seconds. However, with the penalty, he just missed out on victory.

Behind Mauron, Schrey held on to second place for a long time. However, as the race went on, he came more and more under pressure. On lap 13, it happened: Marchewicz found a way past the BMW and from then on, he drove a rather solitary race. Schrey, on the other hand, had to keep his rivals at bay more and more. On the penultimate lap, Verdonck worked his way past Schrey so that he crossed the finish line in fourth place. Further down, Tregurtha overtook Heinemann.

Fourth place is enough for Tregurtha to reclaim the points’ lead

Because of this race result, the lead in the drivers’ standings of the 2021 DTM Trophy changed again. Tregurtha claims the leading position that he had lost to his fellow Brit Ben Green (BMW/FK Performance Motorsport). After six of 14 races, he has 110 points to his tally, Green has 107. Schrey is closely behind with 88 points.

Formula 2 star Lirim Zendeli showed significant progress in his second race in the junior race series on the professional DTM platform. The young German talent already achieved a top 10 result in qualifying with the T3 Motorsport Audi. In the race, Zendeli temporarily worked his way up to seventh place. Eventually, he finished ninth.

In the 2021 DTM Trophy, action continues in a fortnight already with the fourth race weekend at the Red Bull Ring in Spielberg in Austria.