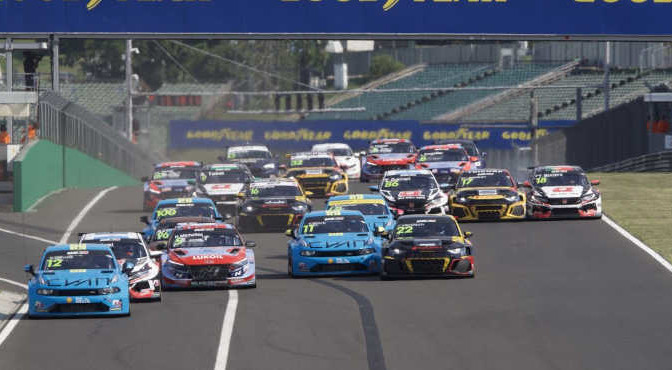 But there was little home success to cheer after Rob Huff was unable to take up his Race 2 pole position for local team Zengő Motorsport following damage in Race 1, while contact at Turn 1 wrecked Hungarian national hero Norbert Michelisz’s bid for victory in Race 2. However, Mikel Azcona’s second place in Race 1 ahead of Yann Ehrlacher (Cyan Performance Lynk & Co) and inherited third in Race 2 meant the Zengő team didn’t leave empty handed. Michelisz (BRC Hyundai N LUKOIL Squadra Corse) was sixth in Race 1 but could do no better than P14 following his brush with Néstor Girolami at the first corner of Race 2.

Azcona completed Race 2 in fourth position but a five-second penalty for Honda-powered racer Girolami promoted the CUPRA Leon Competitión driver to third and drop Girolami (ALL-INKL.COM Münnich Motorsport) to a disconsolate fifth. Frédéric Vervisch, meanwhile, moved up to second to make up for his Race 1 podium loss when contact with Azcona on the final lap dropped him to fourth.

Magnus added a victory double in WTCR Junior and WTCR Trophy to his maiden outright success, while Ehrlacher, the King of WTCR, leaves Hungary as the Goodyear #FollowTheLeader with a two-point advantage over Urrutia. The Uruguayan appeared to have moved to the top of the standings after his Race 2 victory only for Girolami’s penalty to alter the scores in Ehrlacher’s favour.

Driving a Goodyear-equipped, second-generation Audi RS 3 LMS, the Comtoyou Team Audi Sport driver headed team-mate Frédéric Vervisch for most of the race at the Hungaroring, until Mikel Azcona forced his way past on the last lap to claim second. Yann Ehrlacher also passed Vervisch in the scramble to claim a podium and assume his new status as Goodyear #FollowTheLeader.

The race had earlier been interrupted by the intervention of the Honda Civic Type R Limited Edition safety car after Saturday’s top qualifier Rob Huff broke his front left suspension by clipping a tyre stack at the chicane.

“The start was going to be crucial,” said Magnus, who made the perfect getaway from his reverse-grid pole position. “After that the pressure fell away. I have to thank Fred for his work because Azcona was coming fast. I wanted this first win and finally my dream has come true.”

While Magnus and Vervisch made it to Turn 1 without a problem, fifth-placed starter Azcona made contact with the back of Yvan Muller’s Lynk & Co under braking, which knocked the Frenchman into a spin. Later in the lap Santiago Urrutia nudged Tiago Monteiro’s ALL-INKL.DE Münnich Motorsport Honda out of Turn 3 during a frenetic opener.

As the two Audis led the way, Azcona pressured Ehrlacher for third, the King of WTCR incurring a black and white warning flag for violating track limits as he worked to keep the Spaniard behind him. Thed Björk was running fifth ahead of local hero Norbert Michelisz and Huff’s Zengő Motorsport CUPRA Leon Competición.

Azcona moved past Ehrlacher as Huff’s race unravelled when he lightly clipped the tyre stack with only the faintest of touches on lap seven. But it was enough to damage his suspension and leave his Cupra stranded on the circuit, enforcing a safety car interlude while it was recovered.

When the green flags flew on lap 12 of an extended race distance of 14, Vervisch did a great job of holding back the pack as Magnus escaped to secure his victory. But Vervisch was unable to deliver a Comtoyou 1-2 as Azcona and then Ehrlacher got by in a thrilling climax. Vervisch finished fourth, ahead of Björk, Michelisz and Urrutia.

Esteban Guerrieri claimed eighth in his Honda, up from 12th on the grid, ahead of team-mates Néstor Girolami and Monteiro who completed the top 10.

Luca Engstler scored points in P11 ahead of fellow Hyundai driver Gabriele Tarquini and another local hero Attila Tassi. Jean-Karl Vernay climbed to P14 after starting in P16, but it wasn’t enough to keep his points lead. New Goodyear #FollowTheLeader Ehrlacher now holds a six-point advantage ahead of Race 2.

Muller recovered from his first-corner spin to finish as the final points scorer in P15 as local driver Bence Boldizs finished second to Magnus in the WTCR Trophy. Wildcard Nicola Baldan finished one place further back ahead of the Bäckman siblings Andreas and Jessica, Baldan’s Target Competition team-mates.

Along with Huff, Nathanaël Berthon was another non-finisher after retiring to the pits. The Frenchman had just incurred a 10-second time penalty for making contact with Tassi and Vernay at the chicane.

Race 2 report: Urrutia wins as damage woes wreck Huff’s hopes in Hungary
Santiago Urrutia became the eighth winner from eight races in the 2021 WTCR – FIA World Touring Car Cup as the Uruguayan led all the way in Race 2 at WTCR Race of Hungary.

His Goodyear-equipped Cyan Performance Lynk & Co 03 TCR effectively started from pole position after top qualifier Rob Huff was forced to start from the pitlane following the suspension damage he incurred in Race 1.

The Uruguayan’s victory moves him level with fellow Lynk & Co-powered driver Yann Erhlacher in the points standings, but with one more podium finish this year it means the race winner takes over Goodyear #FollowTheLeader status.

“This weekend shows you have to focus on your own thing and you have to be 100 per cent every weekend,” said a delighted Urrutia after the second victory of his WTCR career so far. “I made a mistake in Aragón, so it feels good to be back on top. This is only my second season, so I didn’t expect to be this competitive.”

As expected, the start proved crucial at the Hungaroring. Huff lined up his Zengő Motorsport CUPRA Leon Competición at the end of the pitlane after his team ran out of time to repair the damage from skimming a chicane tyre stack in Race 1. That left Urrutia with a free run down to Turn 1, as the pack jostled behind him.

Girolami made contact with home hero Norbert Michelisz, sending the Hyundai driver into a spin – to the intense disappointment of the enthusiastic partisan crowd that had been welcomed back to the circuit’s main grandstands this year. The Honda driver continued in second place as Michelisz rejoined way down the order.

Frédéric Vervisch made a lightning start from ninth on the grid and found himself moving up to third as the field exited Turn 1. “It was crazy to start P9 and find myself here on the podium,” said the Comtoyou Team Audi Sport driver. “At the start everyone went to the inside.” That opened up space for him to capitalise on his rapid getaway.

Further down the field, Andreas Bäckman was knocked into the barrier at Turn 3 in his Target Competition Hyundai, but soon the field settled down into a high-speed train around the 4.381-kilometre circuit.

Behind the top three Mikel Azcona followed up his Race 1 podium with fourth for Zengő Motorsport, the Spaniard once again making contact with Yvan Muller on the first lap, this time at Turn 2.

King of WTCR Ehrlacher finished fifth to ensure he leaves WTCR Race of Hungary level on points with Urrutia at the head of the table, with Muller sixth and Thed Björk seventh to complete a strong weekend for the Cyan drivers.

Esteban Guerrieri was eighth in his Honda, ahead of Race 1 winner Gilles Magnus, while local hero Attila Tassi rounded out the top 10.

Tiago Monteiro was P11 in his Honda, with Nathanaël Berthon (Comtoyou DHL Team Audi Sport) next up. Jean-Karl Vernay, who came into the weekend as the Goodyear #FollowTheLeader, completed a difficult race day with P13 from P16 on the grid, while a disappointed Michelisz recovered from his first corner troubles to finish in P14.

RACE 1: Gilles Magnus (Comtoyou Team Audi Sport, Audi RS 3 LMS)
“A big relief, I have to say. When I knew I was starting on pole I had a good feeling because this is a track where you need downforce and starting in front is a big advantage for sure. But you have still got to nail the start because it’s a long way to the first corner, so for me that was the crucial moment. We did that very well and afterwards it was just managing. I was lucky to have Fred just behind me, he defended for me very well so I have to thank him for that, good team work. I’ really so happy because finally, we deserved this for a long time. I’ve been second a few times, so I’m really happy with this win. We have had a difficult start to the season, so to be third in the standings is super.”

RACE 2: Santiago Urrutia (Cyan Performance Lynk & Co, Lynk & Co 03 TCR)
“I have to say that Cyan gave me an awesome car, so thank you to Cyan for their hard work. Then it’s a personal thing that when you are competing at such a high level of drivers and teams in the championship you can’t do mistakes, you have to be 100% every weekend. So when I did a mistake in Aragon that cost me a lot of points in the championship and put me out of Q2, in the summer break I just worked. I worked for myself, I did a few things and I kept believing in myself. I said to you at the beginning of the weekend that I felt I could do well, I like the track and everything started in qualifying which put me on the front row. In race one I bring the car home in good points in P7. I was a little bit lucky that Rob didn’t start race two, I started basically on pole. I had a good start and we know at this track when you are leading the pack it is much easier than when you are behind because you lose a lot of downforce. What can I say? I’m super-happy.”