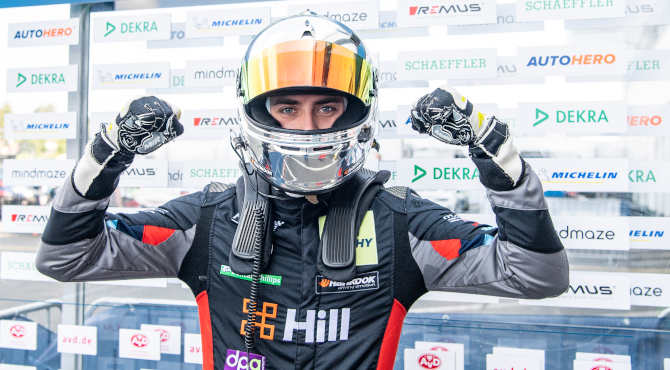 Brit Ben Green (FK Performance Motorsport) came out on top in the DTM Trophy race at the Nürburgring on Saturday. After 20 laps, the BMW secured his second win of the season, taking over the lead in the drivers’ standings following this dominant display. Green’s German fellow BMW driver Michael Schrey (Hofor Racing by Bonk Motorsport) made it a 1-2 for BMW in the junior race series with production-based GT sports cars. Last year’s champion Tim Heinemann ended up third with the Aston Martin run by PROsport Racing from Wiesemscheid, less than five kilometres down the road from the paddock.

Ben Green was in control right from the start. The Brit started from pole position and immediately took the lead. Behind him, there were spirited position fights in a turbulent opening lap. Schrey moved up from fourth on the grid to second while Heinemann also made up two places and slotted into third.

Further down, British driver William Tregurtha (Mercedes-AMG/CV Performance Group) in ninth place led the hunting group following a rocket start, ahead of Belgian Nico Verdonck with the Ring-Racing Toyota and Swiss Audi driver Lucas Mauron (Heide-Motorsport). The driver having lost out in the opening stages was Green’s teammate Moritz Löhner (GER), who dropped back from second on the grid to eighth and eventually finished seventh.

As the race went on, Green gradually extended his lead. After a few laps, the BMW driver already was over a second clear. At the finish, his margin was no less than 3.7 seconds. Schrey’s second place, however, was still under threat in the exciting closing stages of the race. Heinemann and Tregurtha came closer and closer, but not close enough to start an attack. Schrey eventually brought second place home from Heinemann and erstwhile points’ leader Tregurtha.

Behind the first four, there were hard, but fair fights throughout the race. On lap three, Mauron overtook Verdonck for fifth, but wasn’t able to pull away after that. The Toyota driver waited for the driver in front of him to make a mistake, but Mauron didn’t grant him that pleasure and the Swiss drove fifth place home in a commanding way.

German Formula 2 star Lirim Zendeli (Audi/T3 Motorsport) ended up in the midfield on his début in the junior race series on the professional DTM platform. Zendeli started from eleventh on the grid and lost several positions at the start. The young German talent still worked his way up to finish twelfth. This time, fastest woman in the field was Austrian KTM driver Laura Kraihamer (True Racing by Reiter Engineering) in 17th place.

The second DTM Trophy race at the Nürburgring will follow on Sunday afternoon. Fans can watch the action from qualifying and the race on the DTM Grid streaming portal (grid.dtm.com). SPORT1 is also broadcasting the Sunday race live. The free-to-air TV broadcast starts at 3pm, the race gets underway at 3.10pm.