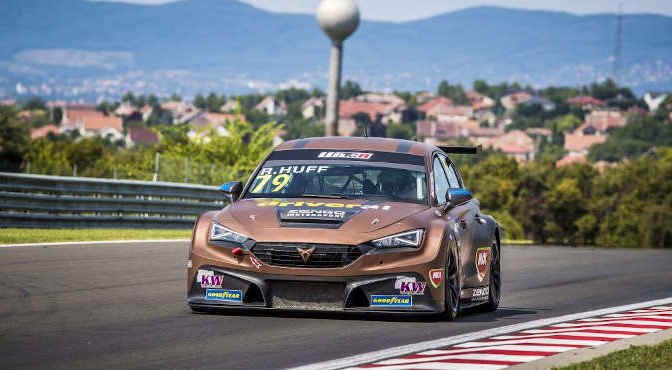 Rob Huff scored a sensational first pole position of the season and on home soil for Zengő Motorsport as the British driver and his team set WTCR Race of Hungary alight in a thrilling qualifying session at the Hungaroring this afternoon.

The 41-year-old put a difficult start to 2021 behind him after a year out of the WTCR to beat Santiago Urrutia and home hero Norbert Michelisz to the top spot in the Q3 shootout and send his Zengő Motorsport team into rapture, while also claiming the first WTCR pole for the Goodyear-equipped CUPRA Leon Competición.

“It’s been tough, so first a huge congratulations to the team,” said a delighted Huff. “They’ve worked so hard to get in this position for their home race. We’ve really struggled this year, it’s no secret. But I managed the lap of my life in Q2 to get into Q3 and to get this result is just fantastic. It’s a dream come true for the team.”

Before the climax, Mikel Azcona set the pace in the 20-minute Q1 session, with a time of 1m52.284s − below the qualifying lap record set by Michelisz in 2018. Gilles Magnus was second fastest from Santiago Urrutia who was a late improver and knocked the impressive Huff down to fourth. Néstor Girolami was next, with Thed Björk jumping up with a late effort to sixth.

Local hero Michelisz only just made the cut to progress to Q2 in P12 as the Hyundais struggled for performance at the Hungaroring. Among those to miss out were Tiago Monteiro, just out of the bubble thanks to Björk’s late improvement in P13. Another local hero Attila Tassi missed out in P14, as did Luca Engstler. But the biggest surprise was Goodyear #FollowTheLeader Jean-Karl Vernay, who could only qualify in P16.

“We’re not where we wanted to be, in the top 10, because Q2 was the target,” said the disappointed Frenchman. “We had a lack of improvements. Norbi on home soil is looking to achieve something great, but we couldn’t. The car was great, but it lacked performance. We have a lot of compensation weight, but we’re definitely not where we want to be.”

Andreas Bäckman also had a tricky session in his Target Competition Hyundai. The Swede spun early on at Turn 2, then clipped the tyre stack at the chicane, causing a brief full course yellow to clear debris from the track. He ended up last, in P23, while team-mate and wildcard entry Nicola Baldan qualified in P21, one place behind Bäckman’s sister Jessica.

Huff, Magnus shine in thrilling climax to Q2
The 10-minute Q2 session ended with a thrilling last few minutes as a number of drivers banked big improvements and mixed up the order. Huff sensationally ended up on top with a stunning new qualifying lap record of 1m51.528s. He finished ahead of home hero Michelisz − the only Hyundai to have progressed to Q2 − Björk, Girolami and Urrutia, all of whom graduated to the Q3 shootout.

Those to miss out included Azcona in an agonising sixth, with King of WTCR Ehrlacher in seventh, uncle Yvan Muller in eighth and Frédéric Vervisch in ninth. Gilles Magnus was in P10, which means the FIA WTCR Junior Driver Title contender and WTCR Trophy leader will start on pole position for the partially reversed-grid Race 1.

Michelisz mighty in Q3 but Huff and Urrutia go even faster
Michelisz was the first to run in the one-at-a-time Q3 shootout, leaving the pitlane to enthusiastic cheers from the partisan home crowd. The Hyundai ace and 2019 King of WTCR set a solid benchmark of 1m52.342s.

Huff was next for his first appearance in Q3 this season. The British driver was up on Michelisz through sector one and that made the difference to allow him to go fastest, an impressive 0.349s faster than the Hyundai.

Now Björk took his turn in his Lynk & Co. The Swede didn’t have the pace to threaten Huff and Michelisz, leaving him third so far.

His Cyan Performance team-mate Urrutia was the penultimate driver to run, the Uruguayan giving his all. He ran wide at the last corner, but still managed a time that left him second, 0.297s off Huff’s mark but good enough to bump Michelisz down to third.

Girolami was the last of the five to run. The Honda driver lost time in the first sector and ended up fourth, dropping Björk down to fifth.

Michelisz was pleased with his performance, despite missing out on pole position in front of his home crowd. “I’m very happy and proud,” he said. “We improved the car run by run and made a big step from Q1 to Q2, raising the bar every time. I’m sad for the team because we struggled today and it’s been tough in general. But I’m sure we can find a solution for tomorrow.”

The question posed to Huff was, can he turn his Race 2 pole position into a victory on Sunday? “That’s the idea!” he said. “Mission A has been accomplished, now it’s time for Mission B.”

Race 1 at WTCR Race of Hungary is scheduled to begin at 12h15 local time tomorrow (Sunday).

Rob Huff (Zengő Motorsport, CUPRA Leon Competición)
“Congratulations to everyone, but the main congratulations has to go to the Zengő Motorsport team. Those guys, they don’t give up, they keep fighting and fighting. You know we’ve had a horrific start to the season. Mikel [Azcona] did a fantastic job in Aragon to get a P2, but the pace just hasn’t been there until this weekend. That comes through hard work, determination and never giving up. So huge congratulations to them. What a time, what a place to do it. It couldn’t have been any better. I don’t want to say it was a shock, the lap time we did in Q2, but it genuinely was a shock. We’ve been hovering around the low 1m52s mark and I was the last car to go. I got pulled in to the weigh bridge and they had a problem with the weigh bridge so we lost some time. So we had to push really quite hard on that outlap of that second run in Q2 and I was trying everything I could not to hurt the tyres, but get to the line before the chequered flag. My engineer was counting me down. We’ve got a timer in the car telling us the split time, whether we are up or down, and I was saying to these guys it was just going a tenth faster, a tenth faster. I’m pretty sure that’s not in my driving, just the ramping of the track just going faster and faster. We just hit the sweet spot with that and the set up and that brings us to where we are.”

Santiago Urrutia (Cyan Performance Lynk & Co, Lynk & Co 03 TCR)
“I expected to be competitive. I made a mistake in Aragon in quali that put me out of Q2. I worked hard in the summer break, working with the team, doing a few things. We finally came here, a track that I like. I did my first podium back in 2012, so it’s a track that I really like and it paid off. The work I did in the summer break and all the work Cyan has done I think is good. Obviously all four cars were strong, because all four cars are in the top 10 so we are really happy. Personally probably more happy than anyone else inside the team because I recovered very quick from the mistake in Aragon. It was good, it was a good lap, I enjoyed it. So I’m happy to be in second position.”

Norbert Michelisz (BRC Hyundai N LUKOIL Squadra Corse)
“You are always confident, especially if it’s your home event because I know this circuit, I know the tricks. I was quite sure I could deliver a good job. But in the end we realised in free practice one it is going to be a bit more difficult than we expected. And then we made a big jump with the car between FP1 and FP2, and then everything started to come together. We did another good step in terms of set-up for qualifying. It was just one of those days where the car and also the circuit gave me confidence, and on top of this having supporters here made it a very nice day for me. As you said, sometimes you don’t expect things that come but still I think the most important part will be tomorrow because my aim will be on the podium, for sure, but also to score a lot of points because this year somehow things didn’t turn out very good for me. And I just need to capitalise on my starting position. My target is to do two good aggressive but also clean races because in the end the championship is always in the back of your head.”

WHAT’S NEXT?
Rounds seven and eight of the 2021 WTCR season take place tomorrow (Sunday) as follows: