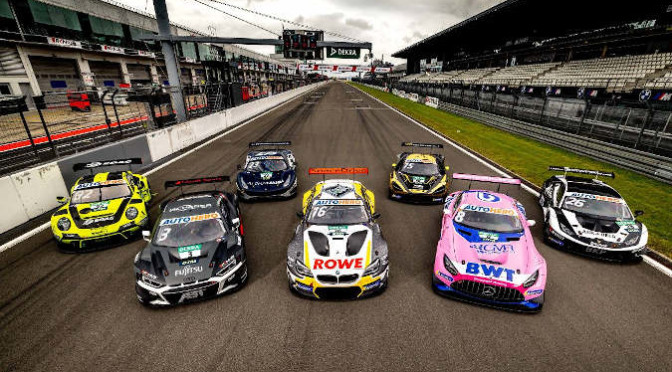 Not the regulars, but the guest drivers were setting the pace on the opening day of the fourth DTM race weekend at the Nürburgring. During his first DTM participation, Luca Stolz (GER) drove his Toksport Mercedes-AMG to a lap time of 1m 27.201s and concluded the practice day as the fastest driver. Upon Porsche’s début in DTM, Michael Ammermüller (GER) followed in second place for the SSR Performance team. The fastest DTM regular was Maximilian Götz (GER) in third place with the HRT Mercedes-AMG.

The DTM field is even more varied in the Eifel. For the first time since 1987, seven brands are represented in the field and for the first time since 2016, there are 23 drivers (including one female driver, Esmee Hawkey from Great Britain) on the grid. At the Nürburgring, a range of new drivers are mingling with the regulars. Next to Stolz, whose team Toksport WRT is based in Quiddelbach at the Nürburgring, and Ammermüller, other newcomers are Christopher Haase (GER) with the Rosberg Audi (replacing Dev Gore, who is ill), Markus Winkelhock (GER) with the ABT Audi (replacing Sophia Flörsch, who has clashing commitments) and Hubert Haupt with the HRT Mercedes-AMG, who is making his DTM comeback after 20 years.

In qualifying on Saturday morning from 10.20am (live on DTM Grid at grid.dtm.com) at the latest, drivers have to show their full potential as this is where the grid positions for the Saturday race (start at 1.30pm, live on SAT.1 from 1pm) will be determined.

In first free practice of the DTM, the guest drivers already proved to be surprisingly strong. While Vincent Abril (MON) topped the time sheets with his time of 1m 27.480s in the HRT Mercedes, three newcomers followed in second to fourth place with Luca Stolz (GER) in the Toksport Mercedes, Christopher Haase (GER) in the Rosberg Audi and Michael Ammermüller (GER) in the SSR Porsche. Christian Klien (AUT), racing in DTM with the JP McLaren for the second time after Zolder, also showed a strong performance in fifth place. All the way down to Markus Winkelhock (GER, ABT Audi), also racing in DTM for the first time this year and competing in his 50th DTM race this weekend, the lap times of the drivers were within one second.

“That was a good start of the weekend. Of course, we had the advantage of having fresh tyres, but it helps in preparation for qualifying. Only tomorrow, we will get to see where we really are. The car is running well, we are very happy and it is great fun in DTM,” Toksport driver Luca Stolz said on Friday afternoon.

Second practice, during which most drivers posted their fastest times of the day, confirmed the initial impression. Stolz caimed first pace from Ammermüller, Götz and Lucas Auer (AUT, Mercedes-AMG, Team WINWARD). Ex-Formula 1 driver Christian Klien repeated his fifth place from the first session. This time, it was even closer: drivers in the first 21 positions were separated by less than one second.

In the DTM Talk on Friday, the two guest drivers Michael Ammermüller (SSR-Porsche) and Markus Winkelhock (ABT-Audi) as well as Zolder race winner Marco Wittmann (Walkenhorst-BMW) and Esmee Hawkey (T3-Lamborghini) answered questions from the media representatives. “It is great to be racing in DTM for the first time,” Michael Ammermüller said. “For many years, I already had chances of getting a drive, but it didn’t work out back then. Now, I am feeling really comfortable here. Perhaps our lap times today aren’t fully representative as we had fresh tyres. The entire field is very close.” Markus Winkelhock is in a DTM car for the first time since the 2010 season finale in Shanghai. “For me, it is coming full circle in a way because back in 2007, I did my first DTM race with the ABT team and now I am racing with ABT again. The Saturday race will be my 50th DTM race. I am happy to reach this round number now.”

Two-time DTM champion Marco Wittmann briefly reflected on his success at Zolder. “Winning a race is always nice anyway, but victory on Sunday is even slightly better because you have more time to enjoy the success until the next race,” he explained. “After Zolder, I had some relaxed days. That was good, because it will be very intense from now on.” This weekend, British driver Esmee Hawkey is the only woman in the DTM field. She is finding her way in DTM more and more. “I hope to be able to attract more young people to become involved in motorsport,” she said. “In DTM, things are going better and better for me. My next goal are the first championship points.”

Marcel Marchewicz (GER) had a remarkable premiere in the DTM Trophy with his Schnitzelalm Mercedes. With his time of 1m 35.508s in first free practice, he ended up fastest of the day followed by the two PROsport Aston Martin drivers Tim Heinemann (GER) and Mike David Ortmann (GER). Newcomer Lirim Zendeli (GER), normally competing in Formula 2, ended up in fourth place after his first outing with a GT car with the T3 Motorsport Audi. In second practice, rain set in pretty soon, preventing any further lap time improvements. This time, Nico Verdonck ended up fastest with a time of 1m 35.987s with his Ring Racing Toyota, followed by BMW drivers Ben Green (GBR, FK Performance), Michael Schrey (GER), Christopher Rink (GER, both Hofor Racing by Bonk Motorsport) and Theo Oeverhaus (GER, Walkenhorst Motorsport).

The two races of the junior race series DTM Trophy get underway on Saturday and Sunday at 3.10pm and will be broadcast live on SPORT1 from 3pm onwards.