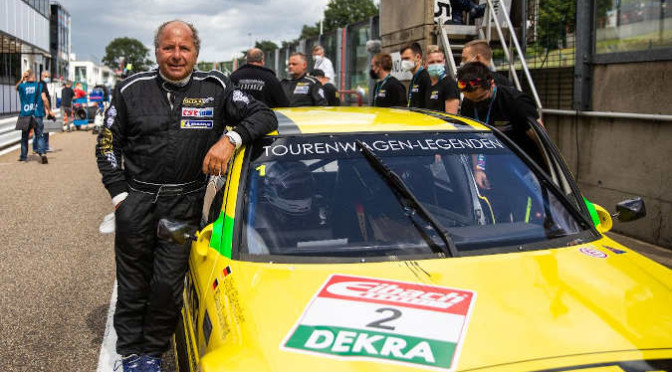 His achievements at the Nürburgring got him the “King Ludwig” moniker. When the DTM is racing in the Eifel this weekend, Klaus Ludwig is in the middle of the action again and is enjoying himself twice: “Driving these cars today is still so much fun,” he says about the 1996 Class 1 Mercedes he is still racing successfully in the DTM Classic – Touring car Legends competition. Meanwhile, Ludwig is 71 years old, but he is as fast as ever. And the three-time DTM champion very much likes the current DTM, too: “The GT3 race cars are a revolution in motorsport, the races are fantastic, also in DTM. That is great for the spectators.”

“My wife and my son Luca are saying that I must be crazy, still making all these efforts,” Ludwig tells. “But I am massively enjoying it. For me, driving these cars was never a chore.” For three years, he has been racing in the Touring car Legends series that has become part of the DTM platform this year. “We are showing the DTM cars from a great era.” The driver, who was born in Bonn, has already won four races this season. But just winning races isn’t what satisfies him. “Victories are always nice, but competition is the key in motorsport. When Kurt and I are really on it, that is where the real fun starts.” Dane Kurt Thiim and Volker Strycek, two former DTM champions, Klaus Niedzwiedz and Marc Hessel are among those trying to take on “King Ludwig”. And Ludwig is making a point of emphasizing that, with the 1996 Mercedes, he is just marginally slower than the current DTM race cars. “The car is like on rails, just like back in the day, it is simply fantastic to drive,” he says with shining eyes.

Three-time Le Mans winner Klaus Ludwig is fully enjoying spending time in the paddock. “The atmosphere is really great.” Ludwig is in the centre of it all, discussing the technology of the old DTM generations and the GT race cars of the current DTM. Klaus Ludwig being Klaus Ludwig, passionate and always speaking out in an unmistakable way.

He is fascinated by the 2021 DTM. “Now having seven brands in DTM is great. But from my perspective, there could be ten just as well. Here, you simply have to be present as a brand!” At the Nürburgring, Porsche is making its DTM début. “Hopefully, Porsche will be doing a good job, and I am certain they will. Then, the future of the DTM is bright,” the 37-time DTM race winner is convinced. Criticism that DTM with GT race cars has nothing to do with the old DTM, he is refuting as “Bullshit. The old DTM was too expensive, it wasn’t interesting for the spectators, there were many differences during a weekend, people didn’t know why this car didn’t perform or why that other car was suddenly winning,” Ludwig said.

At the Nürburgring this weekend, Klaus Ludwig has another duty, something close to his heart. Born in Bonn and having lived just above the Ahr valley for years, has started an initiative together with the DTM organisation ITR, AvD and Nürburgring GmbH, for youngsters affected by the flooding that devastated the Ahr valley on 14 and 15 July. On Saturday and Sunday, two groups of youngsters are coming to the ‘Ring to spend a couple of nice hours at the DTM and with some exclusive glances behind the scenes to slightly get away from the unbelievable devastation in the Ahr valley. “Children and youngsters are often victims that are forgotten in such a disaster. They stil have school holidays, but for most of them, any trips were cancelled,” says Ludwig, who has also initiated a fund-raising campaign in DTM Classic.