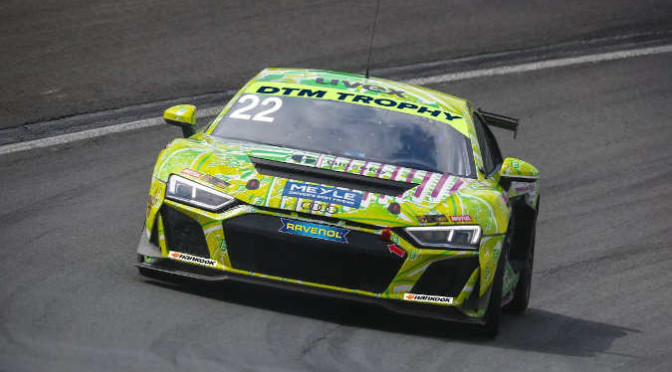 For its race weekend at the Nürburgring, a guest driver has been added to the DTM Trophy field at short notice, and what a guest driver it is! Formula 2 top talent Lirim Zendeli will be racing in the DTM talent pool. The driver from Bochum will be on the grid with starting number 22 with DTM team T3 Motorsport, participating in the DTM Trophy for the first time with an Audi R8 LMS whilst also shining in DTM with a pair of Lamborghinis.

“For me, this is a very exciting opportunity to rack up racing mileage and also get a taste of GT racing during the current summer break in Formula 2,” Zendelli says. “It was a very spontaneous idea, so therefore I didn’t have a lot of time to prepare, never mind any opportunities for testing. But T3 is an experienced team, the Nürburgring is one of my favourite tracks and now, I am curious to find out how well my right foot will harmonise with the throttle pedal of a GT car.”

Jens Feucht, team principal, T3 Motorsport: “We are happy to have one of the biggest talents in German motor racing behind the wheel for us. This also shows the status we have achieved as a team. For us, racing in DTM Trophy will be uncharted territory, too. The series is at the highest level with strong teams and drivers, it will be a challenge for us as well, but we are happy to accept challenges and in the past, we have already shown that we are successful in competition with production-based GT sports cars.”

Zendeli started in karting at the age of ten and graduated to Formula 4 in 2016. In 2018, he won the Formula 4 championship title and stepped up into Formula 3 after that. Following a strong season with a pair of podium finishes and a win in 2020, he advanced into Formula 2 where he is racing for MP Motorsport.

Frederic Elsner, director event & operations of the DTM organisation ITR: “Lirim Zendeli with a T3 Motorsport Audi in DTM Trophy, that is an absolute highlight that we can offer the fans at the Nürburgring and in front of the TV screens. We are massively happy with this. The Formula 2 driver is a huge talent and the DTM Trophy is the talent pool in German motor racing, a perfect match.”

At the Nürburgring, the DTM Trophy is staging its third race weekend of the season. The races on Saturday and Sunday get underway at 3.10pm, SPORT1 is broadcasting both races live while the races can also be watched on the DTM Grid streaming portal (grid.dtm.com).