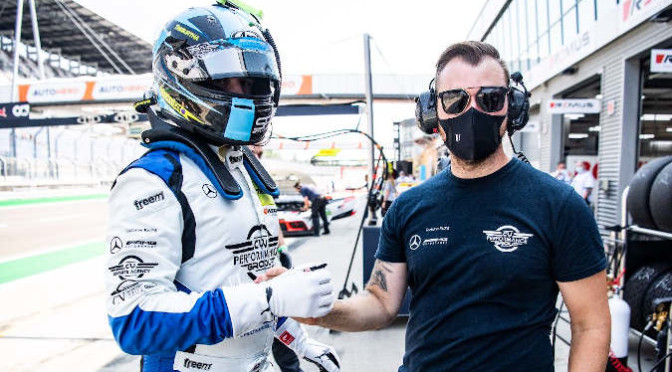 Their journey is a brief one as their respective team headquarters are located in the Eifel and therefore close to the Nürburgring. But that is about the only advantage for the five teams who will be competing in their home round during the third race weekend of the DTM Trophy at the Nürburgring (20-22 August). After all, all the teams are very much familiar with the long-standing race track. Three of these five teams aim at being contenders for the championship title while another outfit, Schnitzelalm, is making its first appearance on the professional DTM stage, at which the junior race series DTM Trophy is presenting itself.

Four different winners from four races: the DTM Trophy is providing sheer excitement, both for the spectators in the grandstands who are admitted in again as well as for the TV audience at home. Both races on Saturday and Sunday (start at 3.10pm on both days) will be broadcast on SPORT1 and the DTM Grid streaming portal (grid.dtm.com).

Two teams from Niederzissen: CV Performance in front, Schnitzelalm is making its début

At present, the team to beat in the hard-fought DTM Trophy, run with production-based GT sports cars, is CV Performance Group from Niederzissen, only 30 kilometres away from the ‘Ring. Only just prior to the season opener at Monza, the team led by Christian Voß submitted its entry, but from the very first lap at the high-speed track of Monza onwards, CVPG driver William Tregurtha has established himself among the frontrunners with his Mercedes-AMG. Next to his victory in the fourth race of the season at Lausitzring, the 21-year-old from Bedford in the UK has added six further points courtesy of a pair of pole positions and also scored a pair of second places and one third-place finish. As a result, he was on the podium in all the races held so far. At 83 points, Tregurtha is leading the drivers’ standings from his compatriot Ben Green (FK Performance Motorsport), who has 71 points to his name. BMW driver Green won the season-opening race at Monza and claimed one pole position. Unusual sidenote: Tregurtha and Green are racing against each other, but are the best of friends, having already shared a flat and also travelling together to the races.

For Ring-Racing, the journey from Boxberg near Kelberg to the Nürburgring paddock is only twelve kilometres. Uwe Kleen’s team has already scored one victory this season with GT stalwart Nico Verdonck behind the wheel of the Toyota. The Belgian is currently fourth in the DTM Trophy standings with a total of 38 points. Verdonck’s teammate in the second Ring-Racing Toyota, Dutch lady racer Stéphane Kox, has also been showing a considerable performance so far and scored points from both races at Lausitzring, clearly finishing ahead of her female competitors Laura Kraihamer (AUT, KTM) and Sophie Hofmann (GER, Audi).

PROsport Racing is the team with the shortest journey to the Nürburging. From the team’s base in Wiesemscheid, the paddock is less than five kilometres up the road. Of course, all the team’s mechanics are sleeping at home, a slight logistical and also financial home advantage. PROsport is running three cars including an Aston Martin for Tim Heinemann. For the German, his project title defence isn’t going according to plan yet. At Monza, Heinemann was first across the finish line, but was relegated to third following a time penalty. At Lausitzring, he was leading the race once more until an opponent massively missed his braking point and took the Aston Martin with him. With ten races remaining, however, Heinemann (20 points) hasn’t given up his ambitions yet.

While the Racing One team (Audi) with Romanian driver David-Mihal Serban is heading to the Nürburgring from Plaidt, some 45 kilometres away, a newcomer also has its team base in the village of Niederzissen in the Brohl valley, well-known in motorsport circles. Schnitzelalm-Racing, normally a regular entrant in endurance races at the Nordschleife, will be running a Mercedes-AMG for Marcel Marchewicz (GER). “For us, participating in the DTM Trophy is another step towards professional motorsport,” team principal Thomas Angerer says. “The DTM Trophy is staging motorsport at a high level and with its production-based GT cars is a very good stepping stone for DTM. For us, it is the perfect series to acquire further experience in GT racing.”