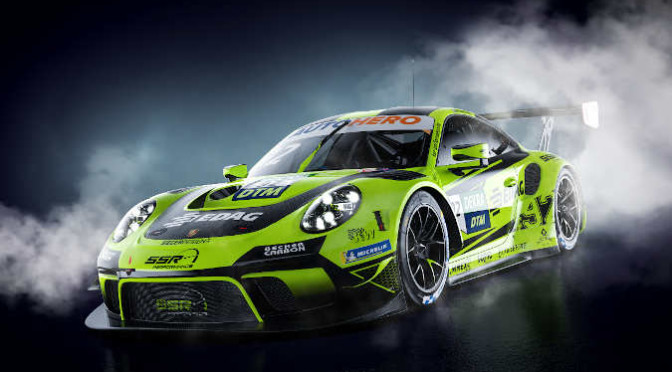 Prominent newcomers in the DTM field. Top-notch team SSR Performance will be participating during the Nürburgring race weekend from 20-22 August. This also means that a seventh premium manufacturer will increase the already impressive variety of brands in the long-standing series even further. Next to Porsche, Audi, BMW, Mercedes-AMG, Ferrari, Lamborghini and McLaren will be on the grid at the Nürburgring. The SSR Performance team will be running a Porsche 911 GT3 R while Michael Ammermüller will be racing the over 500 hp strong car.

“We are delighted to be able to welcome SSR Performance and Porsche in DTM. The team and the brand represent racing at the very higest level, a perfect match for our series. Being able to present the fans at the Nürburgring such an enormous variety of brands is making us proud and happy,” says Frederic Elsner, director event & operations, ITR.

SSR Performance is the motorsport team of Munich-based company SSR Performance GmbH. Founded by Stefan Schlund in 2016, the company’s day-to-day business is repair, maintenance and service of sports cars and classic cars across all brands. The SSR Performance team completed its first full season in ADAC GT Masters in 2020 and won both the drivers’ and teams’ titles at first attempt. In 2021, the racing team is again leading both standings with drivers Michael Ammermüller (GER) and Mathieu Jaminet (FRA).

Stefan Schlund, managing director, SSR Performance GmbH: “As a business owner, I am always thinking about where and how the company can be positioned in the best way. With this guest participation, we want to explore whether DTM is the right platform to broaden the scope of SSR Performance even further in the future. We had a short-term, highly compressed planning phase and will be participating with a newly assembled team. We are looking forward to the guest participation at the Nürburgring with its long heritage.”

His driver is highly motivated: “I am very happy by the fact that SSR Performance has selected me as the driver for the DTM guest participation. It will be my first race weekend in this series which surely will be a huge challenge,” 35-year-old Ammermüller says. “A perfect preparation wasn’t possible due to the limited time, regulations are different. That will definitely make it exciting and interesting. I will be highly motivated for my participation at the Nürburgring.”

The first-ever participation of a Porsche in the long history of DTM is eagerly awaited as well. With involvements in Formula E, IWSC, WEC, worldwide activities with the GT3 R and the brand’s own Carrera Cup one-make series, the sports car manufacturer is an institution in motorsport. “The guest participation is a classic win-win situation for everyone involved. Of course, we are curious to see whether the Porsche will succeed in being among the front runners right away,” Frederic Elsner adds.

Wolfgang Hatz, team principal, SSR Performance: “I have very good memories of the DTM, in which I have been actively involved for many years. Now, we are hoping for a super exciting race weekend with our young SSR Performance team. In particular, we hope to be able to make a contribution for the region as well with the first race event after the severe weather disaster.”

This weekend, the Nürburgring will be hosting the fourth DTM race weekend of the 2021 season. So far, events were held at the Autodromo Nazionale Monza, DEKRA Lausitzring and Circuit Zolder. The races on Saturday and Sunday will be broadcast on SAT.1 from 1pm (race start at 1.30pm) and in over 60 countries worldwide. Tickets are still available at the DTM Ticket Shop (tickets.dtm.com) and from the DTM Ticket Hotline at +49 1806 99 11 66.