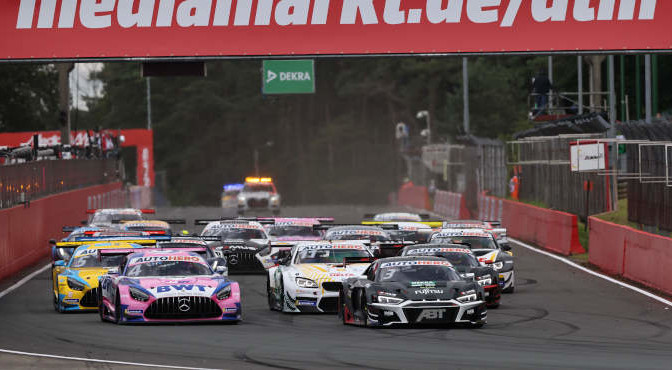 Second win for Kelvin van der Linde who extends his points’ lead, a thrilling three-way battle up front: the fifth DTM race of the season at the old-school race track at Zolder in Belgium had a lot on offer again. Eventually, the ABT Sportsline team from Kempten in the south of Germany emerged as the big winner, scoring the first 1-2 of the season.

From first place on the grid, South African Kelvin van der Linde drove his ABT Audi to his second win of the season following his success at Monza on Sunday. Teammate Mike Rockenfeller finished second, scoring his second podium finish of the year as he kept Alex Albon (THA) with the Red Bull Ferrari at bay in an entertaining duel. With Vincent Abril (MON) in the HRT-Mercedes, Marco Wittmann (GER) in the Walkenhorst BMW and local hero Esteban Muth with the T3 Lamborghini in fourth to sixth place, five different brands were represented in the first six positions.

Prior to the second race at Zolder on Sunday (1.30pm, live on SAT.1 and grid.dtm.com), Kelvin van der Linde extended his lead in the drivers’ standings to 32 points. With a total of 97 points, the South African is leading 19-year-old New Zealander Liam Lawson (Red Bull Ferrari, AF Corse), who retired early and remains at 65 points. Next up is Lausitzring race winner Maximilian Götz (HRT Mercedes AMG) with 54 points.

Kelvin van der Linde: “We had a test at Zolder a couple of weeks ago and as a result, we were really well prepared as a team. I am curious to see what it will be like on Sunday when everybody has experience around here.” His teammate Rockenfeller scored his best result of the season so far: “Kelvin is a pretty good benchmark, he is just so good in these cars. I am really happy that things are on the rise, I am here to compete for victories.”

There was a lot of action after the start already as Daniel Juncadella (GruppeM Racing Mercedes-AMG) and Arjun Maini collided. One of the frontrunners in the drivers’ standings also became involved: Liam Lawson was punted into the gravel trap by Maini’s GetSpeed Mercedes-AMG and the second-placed in the drivers’ standings retired as a result. “That is really disappointing, of course, there was nothing I could do,” the New Zealander said. “But the action continues tomorrow already.” The safety car was deployed, Kelvin van der Linde was leading from Marco Wittmann in the Walkenhorst BMW.

Fans again got to see close racing again at the restart during which van der Linde managed to defend his lead. A large part of the drivers then immediately turned into the pits to get fresh tyres, but Alexander Albon wasn’t among them. The Formula 1-experienced Red Bull star had opted for a different strategy with his AF Corse team, stayed out longer and put in impressive lap times with older tyres. The result: an entertaining on-track fight in which Rockenfeller, the 2013 DTM champion, withstood Albon’s pressure with routine and class. Albon: “At any other track, we would have won the race, but with all their experience, Kelvin and Mike aren’t making any mistakes, so third place was all there was.”

A bit further down, local hero Esteban Muth showed that overtaking isn’t impossible at Zolder: the 19-year-old Belgian with the T3 Lamborghini overtook Lausitzring race winner Philip Ellis (Mercedes-AMG, Team WINWARD) with a strong move, also caught Maximilian Götz and secured sixth place in his home race. As a result, there were five different brands among the first six positions. Christian Klien, meanwhile, didn’t score any points yet in his first DTM race with the JP Motorsport McLaren. The Austrian finished in twelfth place.