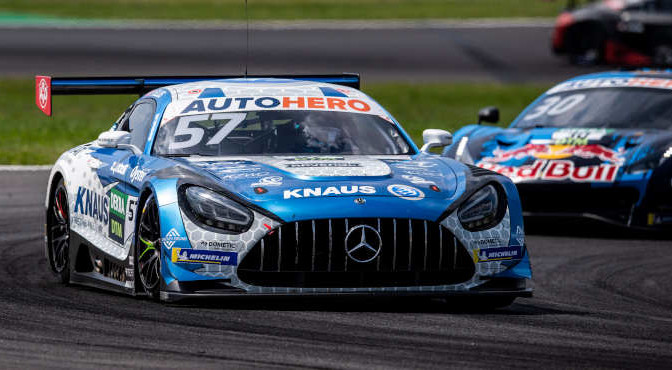 High speed at Monza, the banked corner at Lausitzring and now the ‘old school’ race track at Zolder: on the third race weekend (6-8 August) in Belgium, the DTM aces will be facing a new test. Classic gravel beds and nearby Armco barriers require utmost driving precision, just like the high kerbstones and the tight chicanes. “At Zolder, there is no room for error,” says two-time DTM champion Marco Wittmann (GER), BMW driver for the Walkenhorst Motorsport team, in an unmistakable way. At the ‘Home of DTM’, as Circuit Zolder is calling itself, the track at which the first-ever race of the long-standing was held in 1984, the DTM field increases to 20: for the first time, ex-Formula 1 driver Christian Klien will be on the grid and with McLaren, the Austrian is bringing in the sixth brand.

Zolder has always been a popular venue for motorsport fans, both from the Benelux countries and from the western part of Germany. After all, the city of Aachen is just 70 kilometres away from the track. Like at DEKRA Lausitzring most recently, spectators will be admitted again at Zolder as well, and on all three days on top of that. Tickets can exclusively be acquired in pre-sale from the DTM Ticket Shop (tickets.dtm.com) or the DTM Ticket Hotline (+49 1806 99 11 66), also on the respective race days, whereas there will be no on-site ticket sales. “It is great that the fans can be there again at Zolder as well,” Belgian DTM rookie Esteban Muth is looking forward to his home round. The second-youngest driver in this year’s DTM field, aged 19, has been catching attention with his Lamborghini from the T3 Motorsport team lately.

Four winners from four races: at Monza and Lausitzring, the 2021 DTM shone with thrilling, action-packed racing. New Zealander Liam Lawson with Ferrari (AF Corse) and South African Kelvin van der Linde with ABT-Audi shared the victories during the season opener at Zolder while at Lausitz, DTM returnee Mercedes-AMG scored a pair of wins with Swiss Philip Ellis (Team WINWARD) and German Maximilian Götz (Team HRT). Van der Linde remains in the lead of the drivers’ standings at 69 points, just ahead of Red Bull junior Lawson (65) and Ellis (48) – all three of them being DTM newcomers. Behind Götz (46) in fourth place, Formua 1 driver Alex Albon (THA/Ferrari/31) as well as the two BMW drivers Wittmann and Sheldon van der Linde (ROWE Racing), both tied at 28 points, are next.

Christian Klien will be adding a breath of fresh air. With the McLaren, run by the JP Motorsport team from Erkeenz in Germany, the Austrian, who will also be racing at the Nürburgring and in Assen, is looking forward to “cool racing” in DTM. “To me, the DTM drivers’ field is tempting, the duels with professionals,” the 49-time Grand Prix driver says. “And the competitive pit stops are spicing up the action even more.” Klien is aiming at a top 10 result: “We will be working to find our way in DTM.”

A lap of the Zolder circuit is only 4,000 metres long, but these are anything but easy. Some drivers are even comparing the track to the legendary Nordschleife at the Nürburgring because there are hardly any run-off areas. Moreover, Zolder is providing a demanding mix of slow and ultra-fast corners, bristled with three tough chicanes. Especially for the brakes and the tyres, it will be hard. “I am expecting two intense races,” says Ellis, who pulled off the considerable feat of moving up from ninth on the grid to victory at Lausitz.

This weekend, Zolder will be hosting the 29th and 30th DTM races in its history. The most successful DTM drivers at the venue are former champion Kurt Thiim (DEN), who, with Rover and Mercedes-AMG, racked up five race wins, just like defending champion René Rast (GER, Audi). The most successful brand, on the other hand, is BMW with ten victories. Wittmann, Sheldon van der Linde and Timo Glock (GER, ROWE Racing) are only too keen to add to that. Moreover, Thiim will be participating in both Touring car Legends races under the DTM Classic banner at Zolder this weekend.

Be it on-site at the race track in Zolder or around the globe via the live stream on TV or the smartphone, DTM fans can look forward to thrilling motorsport action on each of the three days, not only in the DTM as the main act, but also in DTM Classic – Touring car Legends, BMW M2 Cup, Porsche Carrera Cup Benelux and Lotus Cup Europe.

» Quotes from the pre-event press conference on 4 August

“My victory in the Saturday race at Lausitzring hasn’t really sunk into this day. That was a great weekend for me. The feedback I got was very positive. It is quite a difference, winning a race in DTM or in any other race series.”

“When I raced on the DTM support bill, we were already in the DTM environment and of course, we were closely watching the DTM itself. From that perspective alone, the support series are important and interesting. You have to keep your focus and you have to keep your eyes on DTM as the goal.”

“We just had one day of testing at Zolder, I had never previously driven at that track. It really is an ‘old-school’ circuit with limited run-off areas, but I reckon that we will be quite strong there because the Mercedes-AMG is good at all the tracks.”

“I raced in various single-seater categories: Formula 4, Formula Renault and Formula 3. It was all a bit crazy how I ended up in DTM. This is my biggest deal to date. Now, I am totally excited to be racing in DTM.”

“Yes, things have been going quite well so far, but there is no real secret to it, just being totally focussed and working hard. That is what I am doing because racing against all these strong guys really is a dream coming true.”

“Zolder maybe my home track, but I don’t have a lot of experience at this track. I only raced once here, a 24-hour race several years ago.”

“I will be racing an art car in my home round. I have already seen my restyled Lamborghini, it looks really cool. Now, I hope that my performance will be equally special.”

“Having spectators back at the track is an extra motivation and being able to get close to the action again is great for the fans, too.”

“When I started in DTM, the biggest difference was having a roof over my head, having only raced in single-seaters before.”

“The fact that Walkenhorst Motorsport is running only one BMW has pros and cons. I can use all the resources, everybody is focussed on me. But on the other hand, I am lacking a teammate to compare the data or to split the set-up work. I am trying to make the best out of it, that is my challenge.”

“I am super happy that we will be able to race at Norisring later this year. It is only 20 kilometres from where I live. Norisring remaining on the calendar is a big success for everyone involved and the fact that Norisring will now even be the season finale is the cherry on the cake.”

“With Sophia Flörsch, we have a GT newcomer in the team. We are happy with her performance so far. In qualifying at Lausitz on Saturday, she was only seven-tenths of a second down. She is developing step by step and she will be making her way.”

“After the very good season opener at Monza, racing Turn 1 at Lausitzring was something quite special. Initially, we weren’t happy about it, but now, we have to say: congratulations to the ITR for consequently going this way.”

“We spent one day of testing at Zolder. That was very helpful. We have had great results at Zolder already, but last year, we lost the championship at Zolder. That we are currently leading the standings with Kelvin is nice, but we aren’t looking at the points’ table. The season has only just started.”

“Of course, we are looking forward to the Norisring round. For ABT Sportsline, it is the home race, too. A great venue with great memories. In 2002, we won as a privateer team with Laurent Aiello after a fierce battle against Bernd Schneider.”

“Norisring and DTM belong together. Therefore, we have been fighting for a long time and eventually, together with the Motorsport Club Nürnberg and the City of Nuremberg, we succeeded. Hockenheim also was an important element in the process as Hockenheim has been the venue for the season finale for years.”

“We have the greatest respect for what the Nürburgring has been achieving related to the flooding disaster in the Ahr valley. Initially, we didn’t contact the Nürburgring, we just waited. We would have accepted any decision by the Nürburgring, either way. However, the Nürburgring wants to run this race, not in the least for economic reasons, and now, we are looking forward to it.”

“Zolder is ‘Home of DTM’ and an entirely different circuit than Monza or Lausitzring. That will be interesting.”

“With Christian Klien and McLaren, we now have 20 cars and six brands on the grid at Zolder and another driver from Formula 1. That is cool.”