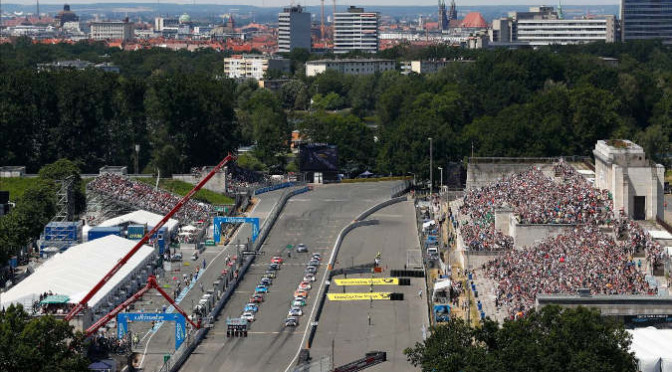 DTM and the Norisring remain closely connected, for this season and beyond. Originally scheduled for early July, the race weekend in Nuremberg will be held on a very special date this year: from 8-10 October, the DTM will be staging the finale of its 2021 season with an attractive variety of brands and world-class drivers at the Norisring. Moreover, the Motorsport Club Nürnberg (MCN), the City of Nuremberg and the DTM are extending the existing contract until the end of 2022.

“I am really delighted that we will be able to stage the Norisring round for our fans this season as well,” says Benedikt Böhme, managing director of the DTM organisation ITR. “We are certain that we will get to see a great season finale at Norisring with its unique atmosphere.” Like at Lausitzring most recently, spectators will be admitted at the track, subject to the pandemic situation and, obviously, in line with the hygiene concept that has already proven itself during DTM rounds. The planned start of ticket sales for the event at the long-standing circuit, in use for racing since 1947, is in mid-August.

“The Norisring race remains in place in Nuremberg. That is good news and shows that we remain attractive for sporting events. To me, it is important that the organisers are now making a start with a DTM Electric in order to work towards a sustainable mobile future in racing as well. At the same time, it is very important to me that ITR and MCN actually achieve the goal of carbon neutrality in 2025. We as a city are contributing wherever we can,” says Marcus König, the mayor of Nuremberg.

MCN chairman Wolfgang Schlosser, who, together with his fellow board members Jürgen Schielein and Peter Brandman worked on making the long-standing race event possible, says: “The MCN is delighted to be staging the season finale and to have secured the Norisring race with DTM on the long term, particularly from sustainable perspectives.”

As a result, fans can look forward to a pair of undisputed highlights within one week with the finale at Norisring and the long-standing event at Hockenheimring from 1-3 October. Frederic Elsner, director event & operations: “Very special thanks go out to those responsible at Hockenheimring who are open to this solution. Hockenheimring and Norisring on back-to-back weekends, that will be a phenomenal conclusion of an exciting season.”

Next to thrilling racing action in the present, there will also be a look ahead into the sustainable future of motorsport. As part of the event programme, ITR, together with one of the DTM’s strategic technology partners, global automotive and industry supplier Schaeffler, will be staging a further presentation of DTM Electric and showcase the next step on the way towards the electrified future. On the mid-term, DTM Electric, as an additional series alongside DTM, will be providing highly attractive motorsport with race cars of over 1,000 hp, taking fully electrified motorsport to a new level as a result.

Moreover, DTM is aiming at making the DTM platform carbon neutral until 2025. To this end, innovative technologies in the DTM race series are to contribute, just like environmentally friendly concepts for the events at the race tracks. Here, the partnership between DTM and the Norisring is playing a significant role as well: DTM, MCN and the City of Nuremberg have set themselves the goal of making the Norisring round the first fully carbon neutral DTM event on the mid-term, turning the Norisring into a lighthouse project on the way towards a sustainable DTM event.

With the DTM Electric Demo Car ride, spectators are already getting a first taste of the sustainable future of an electrifying motorsport experience this year already, during the 2021 DTM season finale at the Norisring.