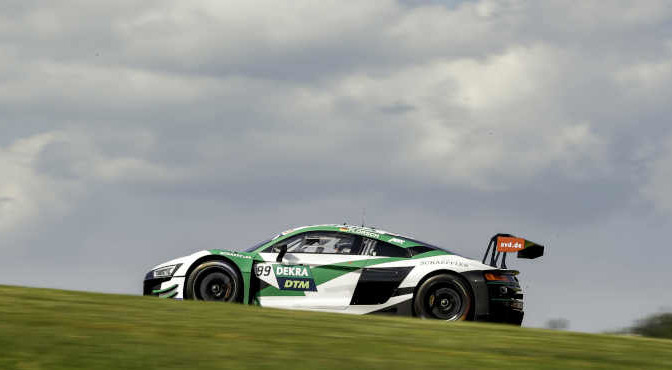 With a fourth and a third place at the Lausitzring, Kelvin van der Linde defended his lead in the DTM drivers’ standings with his ABT Audi R8 LMS. Mike Rockenfeller finished third on Saturday, clinching another podium for Team ABT Sportsline which holds the second position in the team standings after four races, just one point behind the leading team. Nevertheless, the mood was somewhat depressed, especially after the second race on Sunday.

The reason: Kelvin van der Linde was clearly on course for victory on Sunday when the engine of his ABT Audi R8 LMS suddenly cut out on the 27th of 33 laps – at 250 kph and in the banking of Turn 1. Luckily van der Linde had recently retired from a race at Misano for another team for a similar issue and therefore knew exactly what to do: kill the main switch, do a complete reset of the electronics, wait five seconds and then restart the engine – all this at over 200 kph.

His nerves of steel were rewarded: The young South African lost only two positions and almost managed to take back second place from Ferrari driver Liam Lawson. However, because the risk was too high for him, he decided to drive home safely in third place. He thus defended his lead in the championship.

In the first race on Saturday, Kelvin van der Linde started from the front row together with his brother Sheldon. As he had 25 kilogrammes of extra weight on board after his victory at Monza, he had to settle for fourth place in the end. At the start and during a safety car restart, it also became apparent that the Audi R8 LMS is currently at quite a disadvantage compared to its rivals when it comes to acceleration. In addition, the Ferrari and Mercedes teams have a technical time advantage at the pit stops.

Mike Rockenfeller showed a much improved performance after a difficult start to the season for him at Monza. The first podium on Saturday was followed by a spectacular comeback drive on Sunday that took him from 13th to eighth place. After a late tyre change, he overtook five rivals in the closing stages.

Sophia Flörsch was very unlucky: After a promising qualifying session, the 20-year-old retired from the first race shortly after the start without fuel pressure. Troubleshooting proved extremely difficult and long. It was only shortly before the start of the second race that a defective sensor was revealed as the reason. From last on the grid, the DTM rookie fought her way up to 15th place.

The DTM season continues for Team ABT Sportsline in 14 days at Zolder in Belgium.

Quotes after the DTM races at the Lausitzring

Thomas Biermaier (Team Principal Team ABT Sportsline): “Of course it hurts when you lose a victory you thought was safe so close to the end. But Kelvin made the best of the situation and defended his championship lead. That was our goal for the Lausitzring. Overall, we’re satisfied with our performance on both days. Rocky improved significantly compared to Monza and Sophia was also doing well. Unfortunately, there was a broken sensor on her car. Fortunately, our guys were able to solve the issue in time before the second race, also with the help of Audi Sport customer racing.”

Kelvin van der Linde (ABT Audi R8 LMS #3): “I don’t think I’ve ever been as disappointed after a podium as I was after Sunday’s race. I had a good start. The team made a perfect pit stop. I controlled the pace and took care of my tyres. We thought we had the race in the bag when the car suddenly stopped in Turn 1. I had to do a complete reset. Fortunately, I only lost two places and still managed to finish the race.”

Mike Rockenfeller (ABT Audi R8 LMS #9): “With a third place on Saturday and an eighth on Sunday, things went much better for me than at Monza. I learned a lot and now know much better how to drive the car. The team did a superb job. The podium on Saturday was great. But it was also fun to move up from 13th to eighth place on Sunday with the fresher tyres. I’m already looking forward to Zolder.”

Sophia Flörsch (ABT Audi R8 LMS #99): “I definitely made a step in the right direction. Compared to Monza and also to free practice on Friday, my pace in Qualifying 1 was really good. Then, unfortunately, we had some bad luck with technical problems in the first race and in the second qualifying. That can happen in racing. Fortunately, the mechanics found the reason before the second race. From the last starting position, it was a difficult race. But I finished 15th and I’m happy if things keep going in the right direction.”