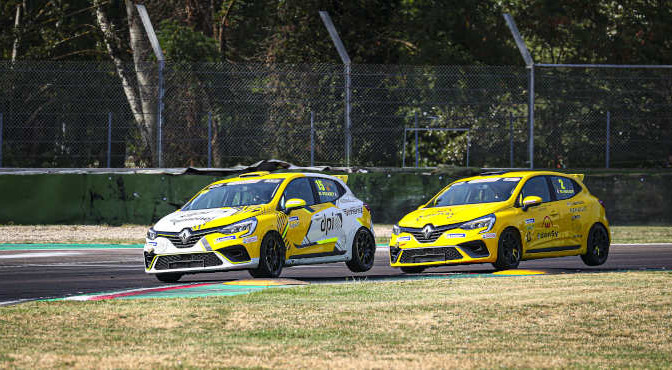 Marc Guillot held onto the lead at the start while his adversaries put on a show as Federico Scionti and Nicolas Milan made contact at Tamburello before Yeraly Ospanov (Milan Compétition) hit Horn (GPA Racing) at the Variante Villeneuve. The safety car came out while the French driver’s Clio Cup was removed from the gravel trap.

At the restart, Marc Guillot and David Pouget quickly pulled away from Giacomo Trebbi (MC Motortecnica), who was under threat from Alexandre Albouy and Nicolas Milan. Alexandre Albouy was the first to find an opening, using the draft on the start-finish straight on lap six before the Italian gave up more ground two laps later.

At the same time, David Pouget surprised Marc Guillot at the same place and took the lead but the new leader didn’t create a gap and the two Frenchmen saw a group composed of Alexandre Albouy, Nicolas Milan, Anthony Jurado and Kévin Jimenez (GPA Racing) close up in the final minutes of the race.

Despite Marc Guillot’s attacks in the last laps, David Pouget held on to take his fourth victory of the season ahead of Marc Guillot and Nicolas Milan. Anthony Jurado finished fourth ahead of Challengers Cup winner Alexandre Albouy and category leader Kévin Jimenez (GPA Racing).
In a field where every single battle for position was a hard-fought affair, Gustavo Sandrucci (Progetto E20 Motorsport) finished seventh, followed by Giacomo Trebbi, Mathieu Lannepoudenx and Lorenzo Nicoli (Progetto E20 Motorsport). In the Gentlemen Drivers Cup, Alessandro Sebasti Scalera overcame a ten-second penalty as he was out of his position on the grid to win ahead of his countrymen Due (Oregon Team) and Andrea Argenti (SI Racing Team).

After the eighth meeting of the season, the general classification is tightening more and more as less than 100 points, or the equivalent of two race win, now separate Nicolas Milan, David Pouget and Marc Guillot. In the Challengers Cup, Kévin Jimenez maintains a solid lead over Mathieu Lannepoudenx and Imola double-race winner Alexandre Albouy. Laurent Dziadus, who skipped Imola, still leads the Gentlemen Drivers Cup but Horn and Alessandro Sebasti Scalera are now five and 14 points behind the Frenchman.

Marc Guillot dominated the weekend, winning both ends of the bill in Group A. With today’s win ahead of Anthony Jurado and Gustavo Sandrucci, he takes the lead in the general classification. Fourth overall, Giacomo Trebbi took top honours among the Challengers ahead of Lorenzo Nicoli and Alessio Alcidi (Caal Racing), who increased his lead in the category ahead of Filippo Berto (Oregon Team). Alessandro Sebasti Scalera came home first among the Gentlemen Drivers, followed by Due and Andrea Argenti, just as he did in Clio Cup Europe. He also made the most of the retirement of title rival Quinto Stefana to extend his lead in the class.

The Clio Cup Europe paddock will meet up again next week for round nine of the year at the iconic Circuit de Spa-Francorchamps before a well-deserved summer break !