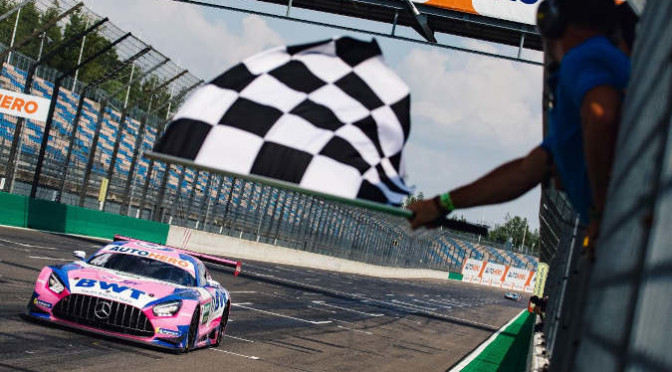 The fourth winner from as many races: also on the second race Sunday, the 2021 DTM is presenting itself with plenty of excitement and variety. For the first time in front of spectators again, Maximilian Götz scored his maiden DTM race win at DEKRA Lausitzring on Sunday. For the young Mercedes-AMG Team HRT owned by Hubert Haupt, it also was the maiden triumph in the long-standing series. Götz (GER), who already raced in DTM in 2015 and 2016, came out on top in a thrilling race, followed home by Red Bull junior driver Liam Lawson (NZL) with Ferrari and South African Kelvin van der Linde with Audi (ABT Sportsline). As a result, three brands were represented on the podium.

Prior to the third race weekend of the DTM at Zolder in Belgium, 6-8 August, Kelvin van der Linde remains in the lead of the DTM drivers’ standings at 69 points from Liam Lawson (65). Next up are Philip Ellis (SUI, Mercedes-AMG, Team WINWARD) at 48 and Maximilian Götz at 46 points.

“For me, a childhood dream came true today. This DTM race win means a lot to me,” Maximilian Götz said. “I would like to thank Hubert Haupt for having been given this second chance in DTM. Hubert Haupt is living and breathing DTM, so I am even more proud to have secured this maiden win for his team.”

The decision in Götz’s favour was the result of problems for erstwhile race leader Kelvin van der Linde and a mistake by second-placed Liam Lawson. When Lawson came into the pits for his mandatory tyre change after eight laps, he stalled the engine as he drove off and decisively lost time. “I can only apologise to the team for this mistake,” the New Zealander said. On lap 27, there was drama for Kelvin van der Linde. His ABT Audi suddenly slowed down. “The car switched off, I had to do a complete reset. Thankfully, I only lost two places,” van der Linde reported.

Altogether, it was an entertaining race with many position fights. At 250 km/h, the field breathtakingly roared through Turn 1. Philip Ellis, the race winner on Saturday, initially defended the lead from first place on the grid, but Lawson in the Ferrari worked his way past Ellis’s Mercedes-AMG with a remarkable manoeuvre while still on the opening lap. Kelvin van der Linde also got closer and closer to Ellis and overtook him on lap three. Several times, DTM race cars were racing side by side, two or sometimes even three abreast. Mike Rockenfeller with the ABT Audi and last year’s runner-up Nico Müller (SUI) with the Rosberg Audi led the field for a long time, but eventually turned into the pit lane to have fresh tyres put on. From then on, Götz was also the real leader from Lawson and Kelvin van der Linde. Behind the trio, there was a train of seven race cars with Ellis followed by a charging Sheldon van der Linde (RSA, ROWE-Racing) ahead of fellow BMW driver Marco Wittmann (GER, Walkenhorst Motorsport), Daniel Juncadella (ESP, Mercedes-AMG, Team GruppeM) and Mike Rockenfeller. Lucas Auer (AUT, Mercedes-AMG, Team WINWARD) and Nico Müller rounded out the top ten.

There was plenty of variety at Lausitz throughout the weekend, both on the podium and all the way through the field. Across both days, five different drivers stood on the winners’ podium. On Saturday, Philip Ellis had become the third Swiss driver to have won a DTM race as he kept Lawson and former champion Mike Rockenfeller (GER, Audi, ABT Sportsline) at bay. Monza race winner Lawson, the youngest driver in the field at 19, was the only driver to end up on the podium on both days, bringing his total to three podium finishes from four races.

At Germany’s most recently-built race track, the focus was on the first corner, 300 metres long and banked. The premiere of the banked corner was an absolute hit among drivers and fans alike. “I wasn’t quite certain how it would work out with Turn 1,” said Götz, “but it all went absolutely fine and was more fun lap after lap. It is demanding. I am sure that the fans liked it, too.”