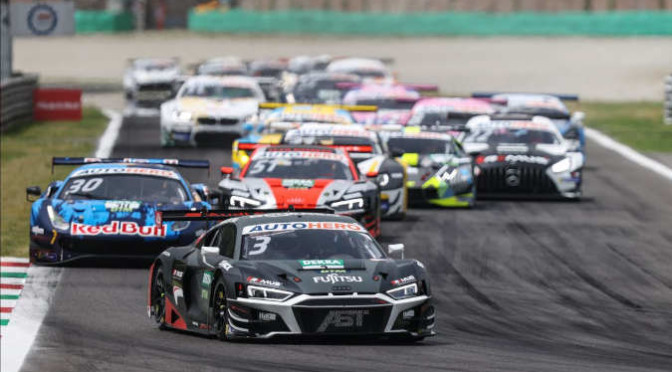 Flat-out or slightly lifting? The 300 metres long and banked first corner at DEKRA Lausitzring is putting the drivers in the 2021 DTM to a real test, a test of courage. When the DTM race cars from Audi, BMW and Mercedes-AMG as well as Ferrari and Lamborghini are starting into the two races on the second race weekend (23-25 July) in double-file formation, wheel to wheel, the 19 world class drivers will be roaring through the first corner, Turn 1 of the Lausitz tri-oval, at a speed of around 250 km/h. What is a real challenge for the drivers will be a breath-taking highlight for the spectators. For the first time since the event at the Nürburgring last year, DTM can welcome fans in the grandstands again. The excitement is according among the drivers, the teams and the organisers from ITR, but above all among the fans. In line with a hygiene concept, approved by the authorities, tickets are only available in pre-sale at tickets.DTM.com or from the DTM Ticket Hotline at +49 1806 99 11 66. There will be no on-site ticket sales at Lausitzring.

The wild ride through the corner for the braves – the new configuration was conclusively approved by the global motoring federation FIA on Tuesday – combined with the return of the fans to the track, close to the action: after the spectacular season opener at Monza in Italy, conditions for an equally spectacular first German round of the DTM could hardly be better, including a summerly weather forecast with temperatures close to 30 degrees.

For the first time, the long-standing race series is run with GT race cars that staged fantastic racing at the high-speed track in Monza. Hot duels in the heat in Italy could be enjoyed on both days, not just for victory, but with intense fights for every single championship point throughout the field. Entertaining position fights over many laps and sensational overtaking manoeuvres were the result. In the first race of the season on Saturday, New Zealander Liam Lawson, only 19 years old, sparked the first big surprise with the Red Bull Ferrari. He won from the two Mercedes-AMGs with Monegasque Vincent Abril and German Maximilian Götz (both Team HRT). On Sunday, Audi struck back as South African Kelvin van der Linde (ABT Sportsline) scored his maiden DTM win. Fellow Audi driver and last year’s runner-up Nico Müller (SUI, Team Rosberg) finished second, Austrian Lucas Auer (Mercedes-AMG, Team WINWARD) came third.

And at Lausitzring, Germany’s most recent race track, located between Berlin and Dresden? At the 4.562 kilometres long track, a mix of parts of the tri-oval and twisty infield sections, the pack will be reshuffled. The character of the track is completely different to that at Monza and, of course, Turn 1.

All a question of the line: the drivers are required

Turn 1 is offering far more than just one racing line. That is making it exciting and will provide variety. Perhaps, the DTM aces will actually also be roaring two or even three abreast through this slightly banked corner? “Three wide,” as the Americans put it, loving their numerous banked corners as they do. The small angle of Turn 1 can also be found in the US, for instance, at the NASCAR track of Homestead, south of Miami. Other US bankings are even much steeper, so much that a car almost runs through the corner flat-out by itself. Not so in Turn 1 at Lausitzring, though, the circuit that has been owned by DTM partner DEKRA since 2017. In Turn 1, drivers, male and female, will be making the difference, no doubt about it. In Turn 1, the world-class drivers have to prove themselves in Turn 1, be it Formula 1-experienced Alex Albon (THA) with Ferrari and Timo Glock (GER) with BMW, DTM stalwarts like Nico Müller (SUI, Audi) or Marco Wittmann (GER, BMW), GT aces like Maximilian Götz (GER) or Maximilian Buhk (GER), both with Mercedes-AMG, and DTM rookies like Esteban Muth (BEL, Lamborghini) or Arjun Maini from India (Mercedes-AMG) or the two women in the field, Sophia Flörsch (GER, Audi) and Esmee Hawkey (ENG, Lamborghini).

According to the BMW drivers, Lausitzring is the circuit, next to Red Bull Ring, where they have the best chances of winning. Last year, Lucas Auer, still with BMW at the time, scored one of the BMW race wins at Lausitz. Glock, Wittmann and Sheldon van der Linde (RSA) will be doing whatever they can to benefit from any advantage for BMW. All the others, meanwhile, will be trying to prevent it. In the high-class DTM, nobody is giving away any points without fighting for them. The fans, especially those coming from Berlin or Dresden, would certainly appreciate a home win. Drivers who could pull this off are Maximilian Buhk, racing for Peter Mücke and his Mercedes-AMG Team Mücke Motorsport, or Esteban Muth with the Lamborghini of the T3 Motorsport team with Jens Feucht at the helm as the team principal. After the considerable performance at Monza, the first championship points for the young British female racer Esmee Hawkey with the other T3 Lamborghini wouldn’t be that much of a surprise either, but perhaps, Sophia Flörsch (GER) with the ABT Audi manages to achieve this as well.

All these and other questions will be answered in two entertaining DTM races, starting on Saturday and Sunday at 1.30pm and broadcast live in over 60 countries as well as on SAT.1 in Germany (from 1pm). All the DTM practice sessions and qualifyings can also be watched on the DTM Grid streaming portal (grid.dtm.com), just like all the races on the DTM platform: the junior race series DTM Trophy, the Touring car Legends under the newly created DTM Classic banner for the first time, the competition debut of the BMW M2 Cup and the Ferrari Club Deutschland Racing Series are a guarantee for excellent motorsport all day long.

» Quotes from the pre-event press conference on 21 July

“Of course, I got a lot of feedback after my victory at Monza. This win was very important for me. After all, I have never made it a secret how much I wanted this success. It was nice that we now had a break after Monza, which enabled me to enjoy the result even more.

I am looking forward to Turn 1, I already did some laps on the simulator. It is great that we are partly racing on the tri-oval as I am a big NASCAR fan, too. Perhaps, the corner is just about flat, but certainly not yet in first free practice. In any case, you need quite some courage for it.

The next couple of weeks will be intense with the DTM races at Lausitzring and Zolder and the Spa 24-hour race in between, but I am used to racing a lot, that isn’t a problem for me at all.”

“That Kelvin scored his maiden race win this early already didn’t really come as a surprise to me. After all, I know what he is able to achieve and he was quick at Monza straight away.

For us, Lausitzring probably is the track where we have the best chances of a possible race win with BMW because of the characteristics. Therefore, I am particularly looking forward to this weekend. Turn 1 will certainly be a great challenge, that is nothing for the faint-hearted!”

“I always really like racing at Lausitzring and it will be another special story with Turn 1. During the test, things were going really well for us so that is making me quite confident for this weekend, too. Of course, the integration of Turn 1 doesn’t mean that the results from the test are now useless. Only the first sector is different, the rest of the track configuration is the same.

It is great that the spectators will be back. My fan club is coming over from Austria and I know from many others that they will be there as well. The grandstand at Lausitzring is massive, it is a great sight when the fans are seated there.”

“That we would be doing so well at Monza already is something that we had perhaps hoped, but not quite expected. It is great that we can now compete in our home race at Lausitzring. The goal of our team, founded in November 2018, is the support of young talents in motorsport. Therefore, everybody is working on a voluntary basis, all the revenues go directly into the support of the drivers.

For us, DTM is the most beautiful series in which we have ever raced, all very professional. As a result, we are planning for the long term: we want to be involved in DTM for many years to come.”

“The DTM is the highest level in international touring car and GT racing. Therefore, it was important to us to get there again. We are feeling comfortable, it is all very professional. And the decisive element is that there is just one driver per car, so that he can showcase his qualities. That is something that is lacking in other international series when two drivers have to share a car.

For us, victory with Lucas Auer at Lausitzring in 2016 was the biggest success of our team, the biggest thing one can achieve as a privateer team. Lausitzring is close to Berlin, so many people are coming over for the weekend.

The professionalism in DTM has remained the same and so has the quality in the drivers’ field, also because of the support from the manufacturers. The level is incredibly high.

Last weekend, I was able to experience for myself what driving in a banked corner is like as I was racing at Zandvoort. The forces that the driver is exposed to were fascinating. At Lausitzring, everybody has to adapt to this new situation, but that is also part of DTM, the ability to adapt quickly.”