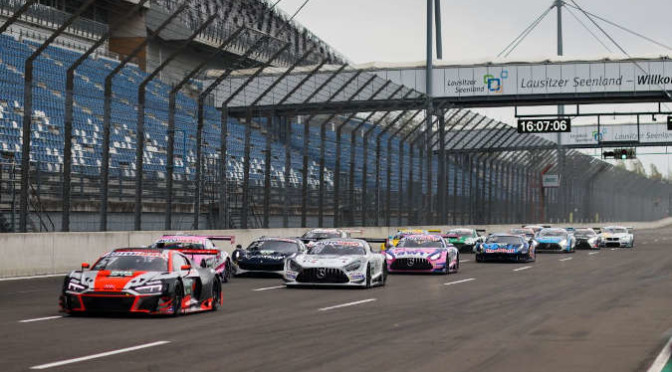 Flat-out through the first corner: as announced, DTM will be racing through the 300 metres long and banked Turn 1 at DEKRA Lausitzring this weekend. The final approval for the revised track lay-out by the global motoring federation FIA followed after an on-site inspection on Tuesday morning. Audi driver Mike Rockenfeller (GER, ABT Sportsline): “Slipstreaming will be very important at Lausitzring and that will provide a lot of racing action, too. I am looking forward to it.” Spectators can look forward to it, too, as they finally are admitted again for the second DTM race weekend.

Rockenfeller, the 2013 DTM champion, is convinced: “Turn 1 at Lausitzring is more demanding than Daytona.” The longest-serving DTM driver explains: “At Daytona, the banking is steeper, so the banked corner can be driven flat-out, irrespective of the line you are in. At Lausitzring, on the other hand, you have to find your position exactly right, you have to circle a bit.” Instead of braking hard at the end of the main straight and turning left into the infield, the world-class drivers of the 2021 DTM field will stay on the throttle, lifting only slightly, if at all. “I reckon, the average speed in sector 1 will rise from 130 to approximately 250 km/h,” runner-up Nico Müller (Team Rosberg, Audi) assumes.

Expert organisation DEKRA, which has been the owner of the facility since 2017, has concluded preparations. In particular, the two outlets to the connected high-speed and test track were secured with concrete elements. Moreover, the pit wall was extended and the position of the so-called first safety car line was changed. The final inspection of the revised track lay-out took place on Tuesday morning by Niels Wittich, circuit inspector of the FIA. “As the banked corners of the tri-oval are characteristic for DEKRA Lausitzring, we are very happy that DTM has opted for this very exciting track configuration for this year’s races at our circuit,” says Uwe Burckhardt, head of Test and Event at DEKRA Lausitzring. Moreover, DTM has exclusively secured the rights to the track configuration with the banked corner for three years.

Jeroen Bleekemolen starts raving when 2003 returns to mind. Back then, DTM used the banked corner in the practice sessions on Friday. “Driving in Turn 1 was mega! Almost flat-out, just lifting very slightly. To me, it was great,” Bleekemolen sparks with enthusiasm. He was a works-driver with Opel at the time and is currently known as one of the busiest and most versatile drivers, also in the US, where banked corners can be found at many tracks. “It was so fast, and then banked, too, that really was a new experience,” Bleekemolen recalls. “Having something different is nice. In terms of on-track action, it is super.”

Following the spectacular season opener at Monza, Lausitzring, located between Berlin and Dresden, serves as the second stop on the 2021 DTM tour, the first one in Germany. The races on Saturday and Sunday (start at 1.30pm on both days) will be broadcast live on SAT.1 in Germany and in over 60 countries worldwide.