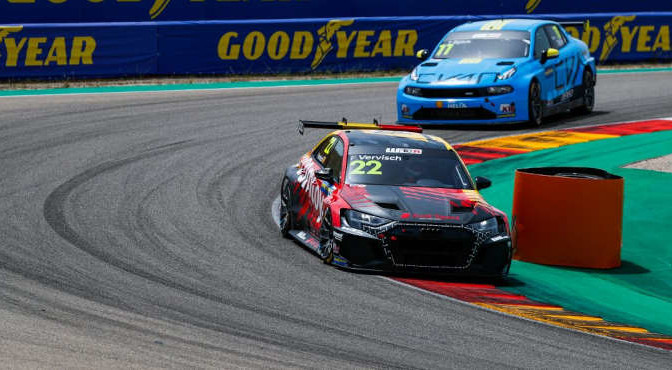 Gabriele Tarquini and Frédéric Vervisch shrugged off the red-hot temperatures at MotorLand Aragón to split the WTCR Race of Spain wins with both returning to the top step of the WTCR − FIA World Touring Car Cup podium for the first time since 2019.

Comtoyou Team Audi Sport’s Vervisch converted his Race 2 pole position into the third victory of his WTCR career and the first for the second-generation Audi RS 3 LMS. Like Vervisch, Björk hit back from a tough opening two rounds to claim the runner-up spot with Magnus third and the best FIA WTCR Junior Driver Title and WTCR Trophy contender.

Tarquini added the TAG Heuer Best Lap Trophy to his haul, while Vervisch completed the MotorLand Aragón weekend as the TAG Heuer Most Valuable Driver.

Tarquini made a strong getaway to keep his advantage from fellow front-row starter Azcona, who chased him hard in the opening stages before dropping back to score his best result of the year so far in his Goodyear-equipped Zengő Motorsport CUPRA Leon Competición.

“I converted pole to victory,” said a satisfied Tarquini. “But the race was not as easy as it looked from the outside. Azcona was pushing until the end. It was a good race. Thanks to Hyundai for a job well done. Even with a lot of weight we are competitive.”

King of WTCR Yann Ehrlacher started third, but was pursued by a trio of Comtoyou Audis led by Tom Coronel. The Dutchman pulled a strong move on lap two to claim third, taking the outside line into the hairpin after the long straight which gave him the inside for Turn 17. Nathanaël Berthon further demoted Ehrlacher as they crossed the start/finish line to start lap three.

On lap six, Coronel allowed Berthon past to chase Tarquini and Azcona, but when he failed to make much impression on the gap the Frenchman allowed his team-mate back through on the last lap to decide the final podium spot.

Cyan Racing Lynk & Co’s Ehrlacher worked hard to hold off Gilles Magnus in his Comtoyou Team Audi Sport entry to claim fifth place. Norbert Michelisz dropped positions from his grid slot on the third row, but recovered to finish seventh, with Race 2 pole position starter Frédéric Vervisch chasing him hard to the flag. The pair made contact on the final lap, but Michelisz rebuffed Vervisch’s attempt to pass.

Goodyear #FollowTheLeader Jean-Karl Vernay finished where he started in ninth, the Frenchman having incurred a three-place grid penalty for holding up Coronel during Q2 on Saturday. Thed Björk completed the top 10 in his Lynk & Co, having started the race from eighth on the grid.

The other points scorers were Yvan Muller who was another to finish where he started in P11, just ahead of fellow Lynk & Co driver Santiago Urrutia. Luca Engstler was P13 in his Hyundai ahead of home hero Jordi Gené. Esteban Guerrieri was the best of the ALL-INKL.COM Münnich Motorsport Honda Civic Type R TCRs in P15, while team-mate Tiago Monteiro served a drive-through penalty for a passing through the pitlane twice during his reconnaissance laps before the start.

The victory on Goodyear tyres also marked a first win for the Comtoyou Team Audi Sport-entered Belgian since WTCR Race of Slovakia in 2019, as he led Thed Bjork’s Cyan Performance Lynk & Co 03 TCR all the way at MotorLand Aragón in temperatures topping 32 degrees.

Björk was chased hard by Gilles Magnus (Comtoyou Audi), the young Belgian tapping the Swede’s Lynk & Co at the hairpin on one lap but never finding a way past. That meant it was a Belgian and Audi 1-3 after 13 laps.

“I got a mega start,” said a delighted Vervisch. “Thed was quicker in some place and I was quicker in the others, but I was worried he was saving his tyres for the end. The safety car I didn’t like, but it seemed we had more pace.”

There was drama at the start when Mikel Azcona, second in Race 1, failed to get away from ninth on the grid, forcing those behind him to scatter around his stricken Zengő Motorsport CUPRA Leon Competición. Behind Vervisch, Björk and Magnus, Norbert Michelisz and Goodyear #FollowTheLeader Jean-Karl Vernay held their grid positions in fourth and fifth – but both soon came under pressure from the Comtoyou Audis of Nathanaël Berthon and Tom Coronel.

Michelisz soon began to struggle, reporting on his radio “a big vibration on the front right”, and from lap seven he started to slip back. Vernay came past for fourth position, which he would hold to the chequered flag − despite also reporting “big noises and a vibration”.

Berthon demoted Michelisz further on lap eight, but the following time around there was heartbreak for Coronel who was forced to park his Audi out on the circuit. That brought out the Honda Civic Type R Limited Edition safety car as his RS 3 LMS was recovered.

After just a single lap behind the safety car, racing resumed with Vervisch making a clean getaway to protect his lead. Race 1 winner Gabriele Tarquini had passed Michelisz just before Coronel’s retirement, leaving him to chase Berthon to the flag to finish sixth in his Hyundai. But Michelisz didn’t make it to the end: damage to his right-front tyre at the final corner at the end of the penultimate lap forced him out.

That promoted King of WTCR Yann Ehrlacher to seventh. Combined with his fifth place in Race 1, the result pushed Ehrlacher up to second in the WTCR points, just eight behind Vernay.

Behind Ehrlacher, Luca Engstler’s Hyundai finished eighth ahead of the scrapping Rob Huff and Yvan Muller. Huff’s CUPRA had passed Muller’s Lynk & Co when the Frenchman ran wide at Turn 1 on lap seven, but on the last lap the four-time World Touring Car champion came back at his old rival. Muller tapped Huff into a half-spin at Turn Eight, but the British driver held the moment brilliantly and kept ahead to secure a ninth place finish.

Esteban Guerrieri was the best of the ALL-INKL.COM Münnich Motorsport Honda Civic Type R TCRs in P11, ahead of Azcona who recovered well from his disastrous start. He headed the Hondas of Néstor Girolami, Tiago Monteiro and Attila Tassi in the final points-paying positions.

Along with Coronel, Santiago Urrutia failed to finish after his Lynk & Co sustained broken suspension following contact. He had run as high as P11 before he was forced out.

RACE 1: Gabriele Tarquini (BRC Hyundai N LUKOIL Squadra Corse, Hyundai Elantra N TCR)
“It was a really hard race with this temperature and with this weight. But, fortunately, the car was amazing. I must thank all the Hyundai and BRC guys because they gave me a fantastic car. We never tested in these conditions, it was very, very hard, especially in the last two or three laps but the car was amazing. The first two or three laps I was pushing and I think he was trying to save the tyres for the second part of the race. I was pushing from the beginning, from the first corner to the end, like the maximum I can.”

RACE 2: Frédéric Vervisch (Comtoyou Team Audi Sport, Audi RS 3 LMS)
“I have to thank our team, the brand Audi, the new car that Gilles proved as well. Congrats to him and to Thed. I’m extremely happy to convert a pole position. From the outside it looks all easy, but I can tell you there was again a lot of tension to have the good start. You have nobody in front of you, so it’s always a bit different. But the start was mega and Thed was quite fast. He told me he had one opportunity, maybe there was another one where he could really try something. But I think after a couple of laps I just had a small gap and I was hoping that Gilles would put some pressure on him and probably he did, I’m not sure. Anyway, the gap was there, so I was not happy with the safety car! The restart was actually bad, but it was at the end good because it was strange, I think there was a lot of pick-up that I didn’t notice and I think everybody was surprised.”