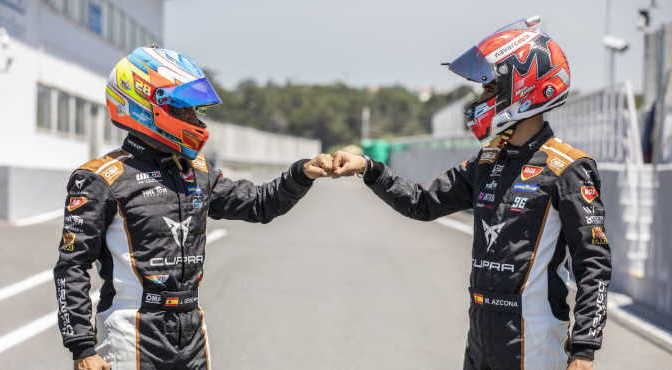 Honda-powered Tassi heads to Spain from his native Hungary high on confidence after he landed his breakthrough WTCR victory at Circuito do Estoril last month. The ALL-INKL.DE Münnich Motorsport young gun became the WTCR’s second youngest winner aged 22 years and 13 days after he moved in front when home-hero team-mate Monteiro was slowed by a technical issue.

With second-place finishes in Germany and Portugal, Muller, the four-time FIA World Touring Car champion, is firmly in the fight for Cyan Racing Lynk & Co. The French legend is equal on points with Uruguayan Urrutia, who bagged his first WTCR win at MotorLand Aragón last November.

Indeed, it was at the season-deciding WTCR Race of Aragon on November 15, 2020, when Yann Ehrlacher became the King of WTCR on the back of a hugely impressive campaign. Ehrlacher, from France, returns to the track this season after winning Race 1 at WTCR Race of Portugal last month and having turned 25 on July 4.

Ehrlacher is among 22 top touring car aces, including category experts and young talents reaching speeds of 260kph in turbocharged TCR cars from Audi, CUPRA, Honda, Hyundai and Lynk & Co, taking on the 5.345-kilometre MotorLand Aragón track for races five of six of 2021.

A new addition to the WTCR roster in 2020, MotorLand Aragón had the unique honour of hosting two WTCR events in the same year with WTCR Race of Aragón added as the season finale following delays readying the planned venue due to the pandemic.

While both visits to MotorLand Aragón in 2020 were behind closed doors, a limited number of 6400 tickets are on sale for this year’s event following approval by the local Security Board. It’s part of the phased return of spectators to international sporting events in Span and will be in accordance with an exhaustive protocol that has been developed to take into account the circuit’s characteristics and facilities to ensure the safety and health of all attendees.

As well as savouring the two races that make up Spain’s rounds of the WTCR, fans will be treated to the unique spectacle that is PURE ETCR, the all-new, all-electric touring car series from Eurosport Events, the same promoter behind WTCR.

Top Spanish racer Mikel Azcona, who will compete with CUPRA power in WTCR and also in PURE ETCR, is relishing the opportunity to compete in front of his home fans. “It’s really good knowing my fans can come because I have received a lot of messages from them on social media wanting to be there,” he said. “When you are driving and you have all this support from the grandstands with the flags and everything it makes you even more motivated and you feel like you are going a little bit faster to do a good result to enjoy with the fans. You want to make a big spectacle to give the fans some good moments.”

Azcona took victory in the second WTCR race to take place at MotorLand Aragón driving a CUPRA Leon Competición for Zengo Motorsport. He’ll be joined in the Hungarian team by compatriot Jordi Gené, who is back racing at international level for the first time in five years this season and is full of experience and achievement. Like Azcona and Jean-Karl Vernay, Gené will be on double time at MotorLand Aragón when he takes part in PURE ETCR’s Race of SP event, which begins on Friday July 9 and shares the billing with WTCR on Saturday and Sunday, albeit on a shorter track layout.

WHAT HAPPENED AT WTCR RACE OF PORTUGAL?

*Having recently turned 22, Tassi became the second youngest driver to triumph in WTCR

*Ehrlacher, who remains the category’s youngest driver to win in WTCR, took the Race 1 laurels

*Tarquini was in the victory fight until tyre damage, caused by track debris, forced his exit

*However, he held on to win ahead of Hyundai racers Jean-Karl Vernay and Norbert Michelisz

WTCR 2021 OVERVIEW
Representing 11 top teams and 12 countries, the 2021 WTCR line-up features six FIA world title winners – including current King of WTCR Yann Ehrlacher – plus nine drivers 25 or under. A total of 69 race wins are shared between the talent-packed entry.

All drivers count on sustainable biofuel from P1 Racing Fuels and tyres from Goodyear. Along with a Balance of Performance and a compensation weight formula, which is applied from the WTCR Race of Spain weekend, their use helps to create a level playing field. Meanwhile, significant cost-control measures help maintain strong grid numbers and allow privateer teams with limited technical support from manufacturers to fight at the front.

The 2021 season is set to comprise five weekends in Europe ahead of a three-event Asia leg. Practice, qualifying and two races are timetabled at each event, which enjoy extensive live global broadcasting.

As well as the FIA Drivers’ and Teams’ titles, the FIA WTCR Junior Driver Title is for the best racer 24 or under at the start of 2021 with no WTCC/WTCR experience prior to 2019. Independent racers competing without direct manufacturer funding are eligible for the WTCR Trophy, while the TAG Heuer Best Lap Trophy and TAG Heuer Most Valuable Driver accolade are awarded at each event.

WHAT’S NEW FOR 2021?
*There will be double-headers only in 2021 with two rather than three races at each event
*New cars from Audi (second-generation Audi RS 3 LMS) and Hyundai (Elantra N TCR) join the grid
*P1 Racing Fuels is WTCR’s Official Fuel Supplier with drivers powered by a bespoke fuel featuring 15 per cent renewable components for the first time
*Jessica Bäckman is the WTCR’s first female driver and joins brother Andreas to form the WTCR’s first all-sibling team run by new all-season entrant Target Competition
*Like the Bäckmans, Jordi Gené is a WTCR newcomer, while Rob Huff and Frédéric Vervisch return after missing out in 2020
*Adria, Estoril and Inje are new to the WTCR calendar with Italy and South Korea set to stage WTCR races for the first time
*The Rookie driver award is redefined and renamed as the FIA Junior Driver Title
*WTCR promoter Eurosport Events has been issued with the FIA’s Three Star Environmental Accreditation following a rigorous auditing process in line with the motorsport world governing body’s Environmental Certification Framework. Click HERE for more information.

DID YOU KNOW?
*The coveted #1 will not be carried in 2021 with King of WTCR Yann Ehrlacher electing to stick with #68, the number he used to win last year’s title and the number of Haut-Rhin, the French department where he’s from.
*Esteban Guerrieri is the WTCR’s most successful driver in terms of race wins with the Honda-powered driver triumphing 10 times for ALL-INKL.COM Münnich Motorsport.
*The Honda Civic Type R Limited Edition as the Official Safety Car of the WTCR for a second season. Richard Veldwisch from The Netherlands is the Official Safety Car Driver at WTCR Race of Spain.

EVENT DESCRIPTION
MotorLand Aragón near Alcañiz in the northeast of the country, was a popular addition to the WTCR schedule when it hosted the inaugural WTCR Race of Spain in 2020. Despite huge enthusiasm for the city-based Circuito Guadalope from 1965, growing safety requirements and difficulties staging top-level events meant time was called on racing through the streets in 2003, which led to the MotorLand Aragón project. Former F1 driver Pedro de la Rosa collaborated with circuit designer Hermann Tilke on the track layout, which was inaugurated in September 2009 and has staged the Gran Premio de Aragón de MotoGP since 2010.

Mikel Azcona (ESP) Zengo Motorsport / CUPRA Leon Competición: “Portugal was a tough weekend, not so much points, but I hope in Aragón, my home race, we will be on the podium, as last year. When you have all this support from the grandstands with the flags and everything it makes you even more motivated and you feel like you are going a little bit faster to do a good result to enjoy with the fans. You want to make a big spectacle to give the fans some good moments.”

Jordi Gené (ESP) Zengo Motorsport Drivers’ Academy / CUPRA Leon Competición: “I have only tested at MotorLand. But when you race at home you always have that extra push. It’s interesting and it’s going to be the first race when we have PURE ETCR and WTCR at the same time.”

Néstor Girolami (ARG) ALL-INKL.COM Münnich Motorsport / Honda Civic Type R TCR: “I hope to come back stronger at Aragón after missing out on a lot of points in Portugal. IIt will be tough for us with the maximum compensation weight, but we will push hard and work together as always to get the cars in the top 10.”

Norbert Michelisz (HUN) BRC Hyundai N LUKOIL Squadra Corse / Hyundai Elantra N TCR: “My target for the rest of the season will be to do clever and clean races and score points. It’s impossible to tell where we will be in Aragón, but I have a good feeling so I’m confident that we can finish inside the top 10.”

Santiago Urrutia (URY) Cyan Performance Lynk & Co / Lynk & Co 03 TCR: “I won in Aragón last year when we were racing in the winter so it’s great to go back in the summer because I love that. I don’t think the heat will cost anything and we can be quick in any condition with the car we have so I am not worried about it.”

Frédéric Vervisch (BEL) Comtoyou Team Audi Sport / Audi RS 3 LMS: “Portugal was a difficult weekend for us. We were P13 and P11 in the two races, we wanted more but we tried what we could, hopefully we can find a better package and be more competitive in Aragón.”

THE BIG NUMBER: 12
All drivers use the single specification Goodyear Eagle F1 SuperSport tyre. For WTCR Race of Spain, each driver has 12 dry-weather slick tyres allocated and can carry over 10 from previous events. In addition, 16 wet-weather tyres are available.

HOW IT WORKS AT WTCR RACE OF SPAIN

Qualifying: WTCR Race of Spain begins with two free practice sessions of 45 minutes and 30 minutes duration, followed by a single qualifying session. This is split into three stages (Q1, Q2 and Q3) and includes two elimination periods (Q1 and Q2). Q1 lasts 20 minutes with the fastest 12 progressing to Q2 where they get 10 minutes to battle for the five spots on offer in Q3. The quintet to progress to Q3 get one lap, one at a time to chase the pole position. Points are handed to the fastest five in Q1 and Q3 on a scale of 5-4-3-2-1.

Grids: Race 1 uses a partially-reversed grid with the fastest 10 in Q2 lining up in reverse order, meaning the driver who finishes Q2 in P10 starts Race 1 from pole position, P9 in second and so on. The drivers who were P11 and P12 in Q2 go next followed by the drivers eliminated after Q1. The Race 2 grid uses the combined qualifying order after Q3.